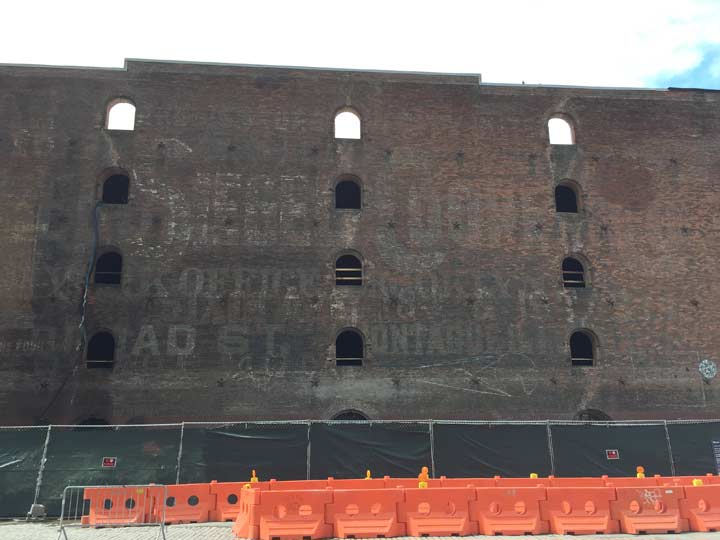 The Arbuckle Brothers were the first national retailers of coffee and produced America’s first national coffee brand, Ariosa, which remains available, complete with a traditional piece of peppermint candy in the bag. The Arbuckles were also sugar importers, and early on, they kept their coffee from getting stale by glazing it in sugar. One of the Arbuckles’ leading creations was Yuban Coffee, introduced in 1913, a year after founder John Arbuckle’s death. Yuban (“Yuletide Banquet” – produced from special beans used by the Arbuckles during family holiday gatherings) had a vast advertisement on the exterior of the broick warehouses built between 1869 and 1875 along Water Street, known as the Empire Stores in the 1930s, memorialized in photographs by the famed Berenice Abbott. The buildings are currently under conversion to lossy mixed-use offices and retail in the gentrified DUMBO of the 2010s. 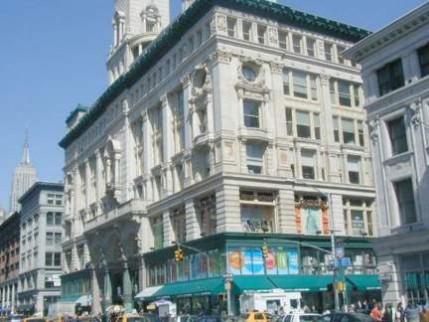 You have to squint to see it but the wall of the Empire Stores facing Main Street features, or featured, a huge painted sign advertising the Siegel-Cooper Stores which were located in the Ladies’ Mile district at 6th Avenue and West 18th Street. Perhaps, the big store used the warehouse to store goods. There are a number of other painted ads on the wall, each of which has faded just enough so you can’t make them out for the most part.

Siegel-Cooper, built in 1895, was the largest of the Ladies’ Mile emporia, containing 15.5 acres of floor space. It used to have a clock tower and a large fountain, since removed and placed in Forest Lawn Cemetery in Los Angeles. Note the large picture window on the 18th Street side: a ramp from the El allowed passengers to walk directly into the store from the platform. It’s presently home to retail such as Bed, Bath and Beyond.

ARBUCKLE & DUMBO: Arbuckle Bros also owned a part of the Jay Street Conn RR which operated within Dumbo(there railroad/float yard is today ConEd)also Arbuckle Bros had a major operation in SanFrancisco….
You can still see tracks in the street in Dumbo which I think was covered in a early ForgottenNY….