WHO IS THAT GUY? at Hoboken Terminal 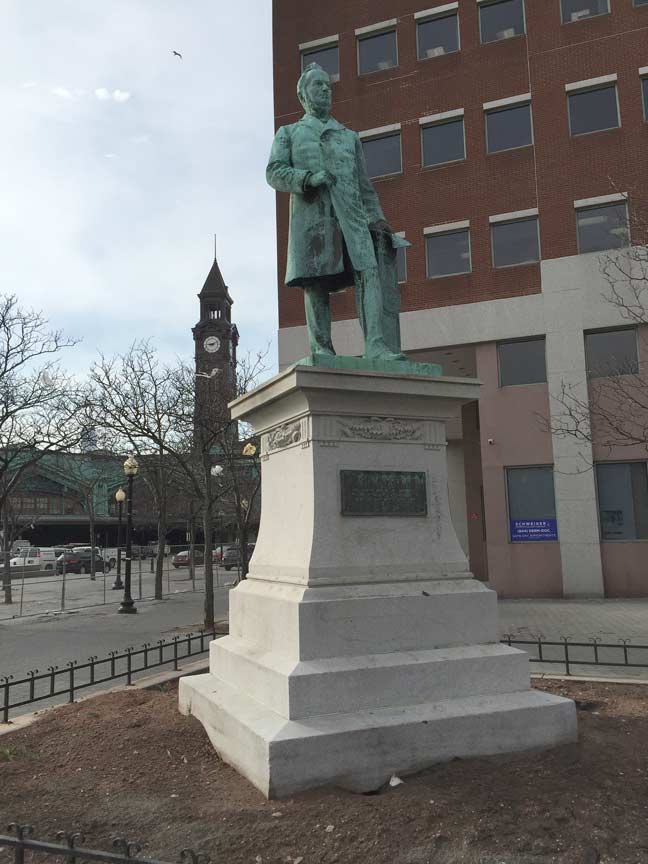 There he stands in magnificent copper verdigris at Sinatra Drive and Newark Street near the mighty Hudson near the Erie Lackawanna Terminal, where trains to all points in northern New Jersey, Hudson-Bergen Light Rail and PATH trains and ferries to New York issue forth. But who is that guy?

Samuel Sloan (1817-1907) was the President of the Delaware, Lackawanna and Western Railroad between 1867 and 1899. Before working for the railroad, Sloan was an Irish immigrant linen importer. Sloan, a Presbyterian, stopped railroad operations on Sundays, perhaps acceptable in the 1800s but would never fly these days. In his early career he resided in Brooklyn, becoming a State Senator; he directed the Hudson River Railroad in 1855 and then the D, L&W in 1864. Under his leadership the railroad prospered in the freight business transporting anthracite from the coal fields of Pennsylvania and vacationers to the Pocono Mountains, then acquiring their reputation as a resort area. Eventually Sloan headed a total of seventeen corporations during his lifetime.

When the George Bissell-sculpted statue was installed in 1899 (during Sloan’s lifetime) it originally faced the terminal. After complaints that Sam Sloan was “turning his back on Hoboken” it was realigned to its present position.

Where do you work-a, John? On the Delaware Lackawan’.