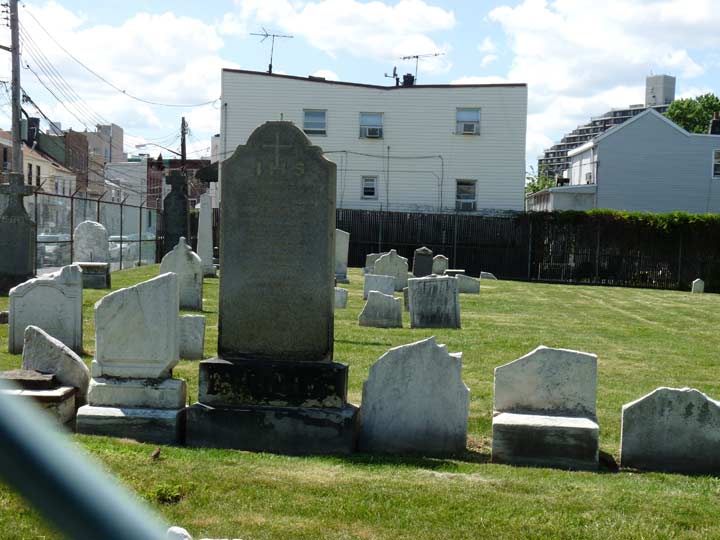 Here’s a friendly neighborhood cemetery at 21st Street (Van Alst Avenue and earlier, Emerald Street) and 26th Avenue, known by locals as the Irish Famine Cemetery, though its grounds are well protected, by a chain-link fence that passing photographers have to shoot through, and well-cared for, by Our Lady of Mount Carmel Church. This is the church’s proprietary cemetery and the church itself formerly stood next to the churchyard, though decades ago it moved to its present location at Newtown Avenue and Crescent  Street. It is the final resting place of about 100 early Irish immigrants to Astoria, many arriving after the Irish potato famine of 1847.

Mass was first celebrated in Astoria in 1835 at the home of a Mr. Tobin by the Ireland-born Rev. Michael Curran, pastor of St. Paul’s in Harlem, according to a history of the church found in the parish archives. Curran travel ot Astoria from New York in the East River’s Hell Gate Ferry.

By 1841, thee were sufficient Irish resident in Astoria to warrant the building of a Catholic Church, and James and Mary Ann Shea, a New York teacher and his wife, donated two plots of land where the original frame building stood. A Mr. Anderson, an Episcopalian gentleman, also donated half lot and the Riker family donated the lot north of the church for burial purposes. The Rev. Curran became pastor of Our Lady of Mount Carmel.

By 1871, the church congregation mushroomed so that its original building was no longer adequate. The cornerstone of the church’s current building was laid nearby as Newtown Avenue and Crescent Street, separating the cemetery from the new church edifice. [NY Daily News]

The condition of the grounds at the cemetery now are a complete turnaround from years ago. Back then, around 30 yrs ago or so (please don’t hold me to the date), there was a story in one of the papers of the cemetery “being discovered”, it was so overrun with bushes & weeds. After that it has been well maintained.

Indeed you are right. I grew up in Astoria, passed that spot many times and did not know there was a cemetery there till they cleaned it up.

Nice post, Kevin. Sadly, Irish-American history in NYC has all but faded into obscurity.

Where is the church now located? There is no Newtown and 35th St. Newtown temporarily stops just west of 33rd St. and doesn’t resume again until just east of Steinway. Did you mean Newtown and 25th St/Crescent St.?

I used to walk past that cemetary all the time- never knew what it was. (And Tom, above, is correct- it was a mess in the 80’s when I lived there).

Newtown Avenue and Crescent, will fix

A Great Aunt is buried there. I believe her last name was WHITE. She was a Sister of a Judge White in Ireland. How would I be able to see if there was a record of burial and if there was still a stone on the grave?

I know you posted this almost two years ago, and you may never see this reply, but there is site with some information that someone collected some time ago: http://www.pefagan.com/gen/astoria/mtcarm/mtcminsc.htm

My great-great grandparents, and great-grandparents are buried there. But the stones are no longer there.

Lee, I’m working on a project to tell the stories of the people buried in Our Lady of Mt Carmel cemetery. Email me at megan@cfl.rr.com if you’d like to share information on your family.

I recently learned that my great grandmother, Sarah McGowan is buried at this small cemetery, although I don’t see her name listed on the list shown above . According to family history, she was born in
Ireland in 1840 and came to America about 20 years later. She was a ladies’ maid in Ireland, a midwife in NYC and then became the first licensed lady mortician. She had 8 children. She was shot & killed in October 1921. I live in California but hope to be able to visit her burial plot one day. She was the widow of Patrick Ducey who died in 1877.

I am researching the families buried in this cemetery. If you have relatives buried there, please contact me