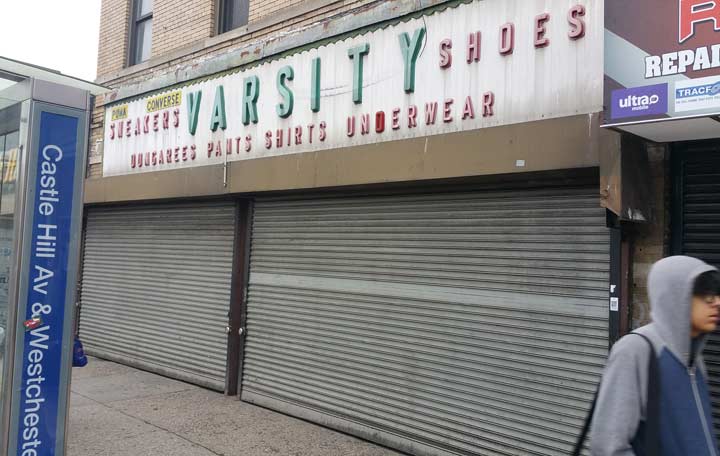 There have been many signs chronicled in FNY over the years. Many can still be read, despite their vintage Some have even faded to the point of illegibility.  But these two signs, one in Crown Heights, Brooklyn and the other in Castle Hill, the Bronx have withstood the ravages of sun exposure and time.

Varsity Army & Navy store at 1279 Castle Hill Avenue, between Westchester and Newbold Avenues, in the Castle Hill section of the Bronx, sports, pardon the pun, a sign that promotes current anachronisms. When’s the last time you’ve heard the word “dungarees”? It seems the word went out of fashion in the late 70s, when dungaree companies figured if they gave their product a new name and image, they could promote them as being fashionable and glamorous. Three fashion jeans companies come to mind from that era: Sasson, Gitano and Gloria Vanderbilt. And did I mention that they charged more money by referring to them as fashion jeans instead of dungarees? And it didn’t hurt that they spent millions on television advertising with women emphasizing derrieres with the jean’s label prominently displayed. I have to give it to them, it was a very clever marketing decision.

Dungarees (jeans), as they were formerly called, were often seen in a negative light, something that was frowned upon by the older generation.  I attended Haaren High School (whose building now houses the John Jay College of Criminal Justice) at 10th Avenue & 58th Street from February, 1967 to June, 1970. When I first attended the school, as a 15 year old student, I distinctly remember seeing signs placed around the school that said, “Dungarees Will Not Be Worn in Haaren.” The rule was strictly enforced. How ya like that?

Look closer. The name Converse is displayed on the sign. If you’re of a certain age, you’ll remember that Converse sneakers, along with Pro-Keds were the gold standard of sneakers. If you wore anything else, you’d be the subject of constant ridicule from your friends at school.   But this was before all these overpriced “athletic” shoes came on the market. These “shoes” now can command prices of several hundred dollars.  If you’re up early in the AM, like I am, and pass by commercial strips around the city that have sneaker stores, you’ll often see young people camping out in front of these sneaker stores overnight in order to get the most up-to-date sneakers, much the same way people camp out in front of Apple stores to get the latest Apple gadget. AND they’re willing to pay big bucks for that privilege of having the latest sneaker.

Call me old fashioned, but I long for the days when I was able to get a pair of Converse Chuck Taylors from Modell’s on 42nd Street for about 8 bucks back in the day. There’s a Modell’s outlet on 42nd Street, but it’s now on the other side of the street from its former location. And you know the best thing about Cons, as they were called? Unlike today’s sneakers that have to be tossed when they become funky (malodorous), you could put your Cons in the washing machine and maybe buy some new strings and you’d almost feel like you had a new pair of sneakers. Incidentally, Converse shuttered their plant in Lumberton, NC about 20+ years ago, idling hundreds workers. They’re manufactured overseas now. That’s a conversation for another day. 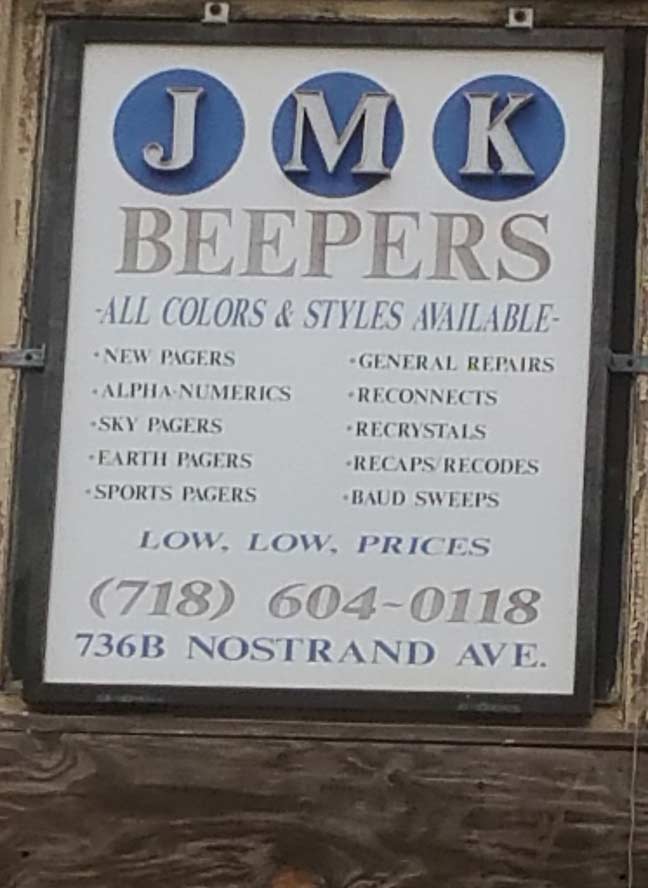 The other sign at 736 Nostrand Avenue, at Park Place, Crown Heights, Brooklyn advertised a business that couldn’t be sustained in light of today’s communication technologies. Modern cellphones with text message capabilities, rendered beepers, or pagers, obsolete almost instantaneously. How many of you had beepers? They only worked well because you could use a public telephone to answer the message. But look at what happened, pay phones are almost extinct in NYC and everywhere else.  I’d be willing to bet that if you’d show a beeper to a person between 15-20 years of age, they’d be stumped to identify what it is. Does anyone remember a company called Smartbeep? By the way, can somebody explain to me and the many readers of FNY what sky pagers and baud sweeps were? Also, what was an alpha pager?

Sky pagers were pagers which used space satellites communicate with the pagers and allegedly be reached anywhere, as opposed to normal pagers. Normal pagers usually only worked in a limited area depending on your provider, so if you got you pager in Suffolk County, it might not work in Bergen County. Most beepers could only display numbers, alpha-numeric pagers were the “new kid on the block” for a while and were larger and more costly than numeric pagers.

Is Varsity Army Navy still open for business? I was born & raised in Parkchester. I attended Castle Hill Jr. High (JHS 127). As late as 1970 I would still shop there. Could this enterprise survive the numerous mall based chain stores?

I think an alpha pager was capable of receiving and displaying a short message which the caller keyed into the phone he was calling from. Sort of like a text message. Of the other items, I don’t know what any of them mean except new pagers and general repairs. I actually liked pagers, the batteries lasted forever and you always had a chance to compose your thoughts ( or make up an excuse ) before returning the call.,

Varsity is alive and well. I walked by the store this past Thursday.