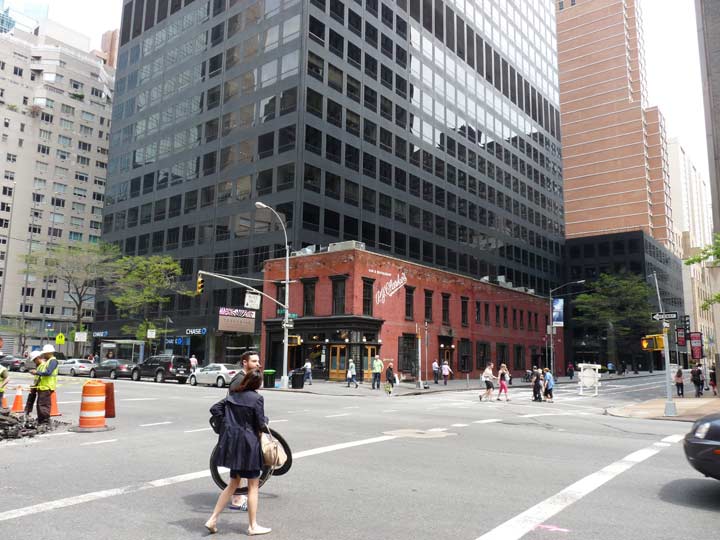 While stumbling around the Turtle Bay area at 3rd Avenue and East 55th Street in 2014, I had no idea I would someday work in the beetling, gray-black #919 3rd, a 1971 skyscraper that was one of the myriad Manhattan buildings designed by Skidmore, Owings & Merrill.

In December 1970 the building got off to a miserable start when three deaths resulted from a fire on the fifth floor. In the building’s early years, it was occupied by carpet manufacturers and wholesalers. The tragedy resulted in the passing of Local Law # 5 in 1973, which stipulated that fire safety directors be present in buildings over 100 feet in height, or occupied with more than 100 people above or below the street or more than 500 people in total.

Its most prominent tenant these days is the Bloomingdale’s offices (the flagship store is 3 blocks away on 3rd Avenue and East 59th Street). I have worked there in both early 2016 and 2017 helping out with copy checking.

When plans for 919 3rd were announced in the late 60s, developers attempted to purchase the property of the venerable P.J. Clarke’s on the corner of 55th. Clarke’s owners wouldn’t budge, forcing the developers to build around it.

Clarke’s was established by Ehret’s Brewery in 1890, with Patrick Joseph Clarke taking over in 1904, continuing until his death after World War II. The place still holds on to old-time trappings such as vintage porcelain urinals, mahogany woodwork, tin ceiling, and portraits of FDR, JFK and Abraham Lincoln. Customers jot down their orders on notepads provided by staff– a longtime Clarke’s tradition. Frank Sinatra, Jackie Onassis, and Nat King Cole were all regular patrons, and Buddy Holly proposed to his wife, Maria Elena, at Clarke’s on their first date in 1958. Dick Clark always made his way here after finishing his New Year’s Rockin’ Eve ABC broadcasts. And, Ray Milland staggered up 3rd Avenue in an alcoholic daze after cadging drinks at Clarke’s, which was called Nat’s Bar in The Lost Weekend. There are 7 other branches of P.J. Clarke’s in Manhattan, Chicago, Washington, Las Vegas, and São Paulo, Brazil, but this is the original.