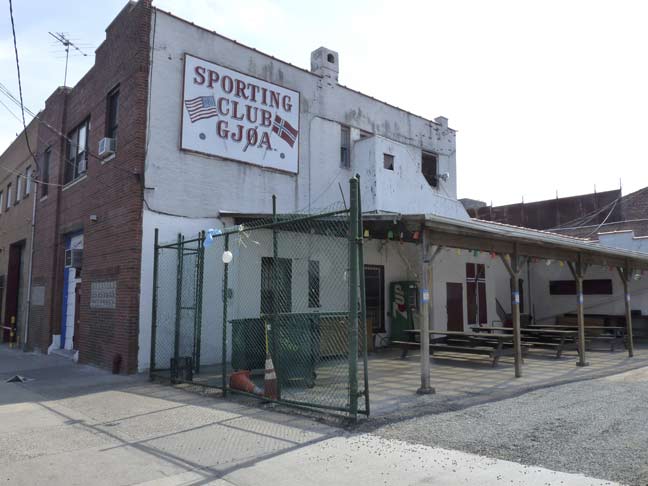 I found an American flag and a Norwegian flag flying by a seemingly empty yard on 62nd Street between 8th and 9th Avenue. I knew I had come upon one of the last palpable representations of Scandinavian Bay Ridge and Dyker Heights — the Gjøa Sporting [Soccer] Club.

…[T]he ship, known as the Gjøa, was commonly regarded as one of Norway’s historic treasures. Built in 1872 in Norway to be strong and reliable, she was named after the owner’s wife, which was a common practice during that time. Capt. Ronald Amundsen bought her in 1901 and fit her with a13 horsepower engine. From 1903 and 1906, Amundsen’s command, the 70-foot craft had gone where no ship had sailed before, and her Norwegian crew achieved success where all others had failed.

This stalwart craft, which had sailed from Norway in June of 1903 with provisions for a five-year voyage, had journeyed 10,000 miles through the Arctic Ocean, discovering the elusive Northwest Passage, a route sought and dreamed about for centuries by the world’s most esteemed maritime explorers. The Gjøa was the first ship in world history, north of Patagonia, to sail from the Atlantic Ocean to the Pacific Ocean. [Gjøa]

The soccer club is near the old Soccer Tavern on 8th Avenue and 61st Street, and in my youth my father would frequently attend the soccer matches at what is still known as Dust Bowl Park at 8th and 65th, which has since been artificially turfed. Across from there, a succession of eateries gave way to Zeke’s Roast Beef, which I visited weekly for over a decade until I moved to Flushing. The inexorable demographic shift finally doomed Zeke’s, which became a Chinese eatery, but Zeke’s was later revived in a smaller venue on 3rd Avenue in Bay Ridge.

Get the full story of my wanderings in the region here.

This is on the cusp of three neighborhoods–Sunset Park, Bay Ridge and Dyker Heights; I picked one.