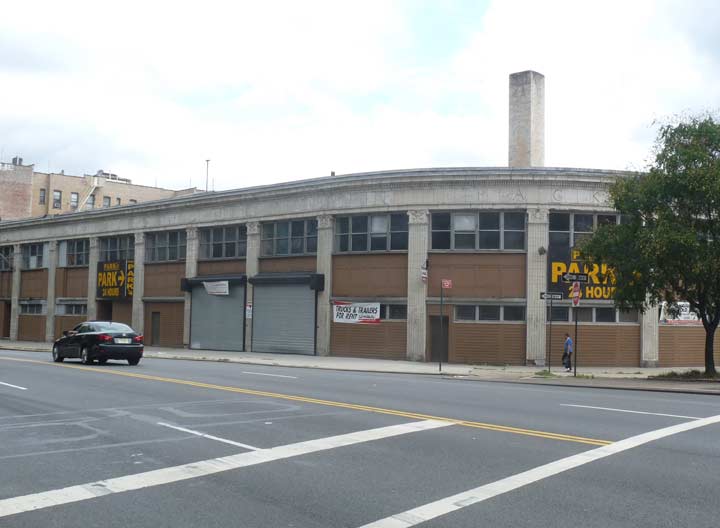 The Packard showroom at Broadway and Sherman Avenue, across the street from Fort Tryon Park,  was designed in 1926 by architect Albert Kahn, who designed Packard showrooms across the country and, although he is now little-known, was in his day one of the highest compensated architects. Packard, famed in its early years for luxury autos, was in business from 1899-1954.

The company was founded by James Ward Packard, brother William D. Packard and their business partner George Louis Weiss, in Warren Ohio. Packard was marketed as luxury brand until World War II, but hoping to gain a greater share of the market, started making more affordable models after the war. Ultimately it was unable to compete with automotive leaders Ford, Chrysler and GM. The company merged with Studebaker in 1954 — which was also out of business by 1966.

Fittingly enough the Packard showroom in Inwood is now a parking garage.

Another Kahn Packard showroom bearing terra cotta letter P’s on the outside walls can also be found on Northern Boulevard between 45th and 46th Streets in Long Island City, an area still home to numerous car dealerships.

2nd AVENUE AND ITS SUBWAY, Part 2

Restore the Packard Showroom & bring back the car!!! I would love one.

For a time in either the seventies and/or eighties (and probably later) this building housed various city services, including, if I remember correctly, the unemployment office that I occasionally habituated. This building was also the center of a huge community protest a few years back when a developer requested a zoning variance so that they could build a 20-something story building on the site, in a neighborhood that has practically no buildings more than 8 or 9 stories. The request was denied, angering our current mayor, who seemed to think it was a good thing for the neighborhood. The last I heard there are plans to build a not quite as tall apartment building sometime in the near future.