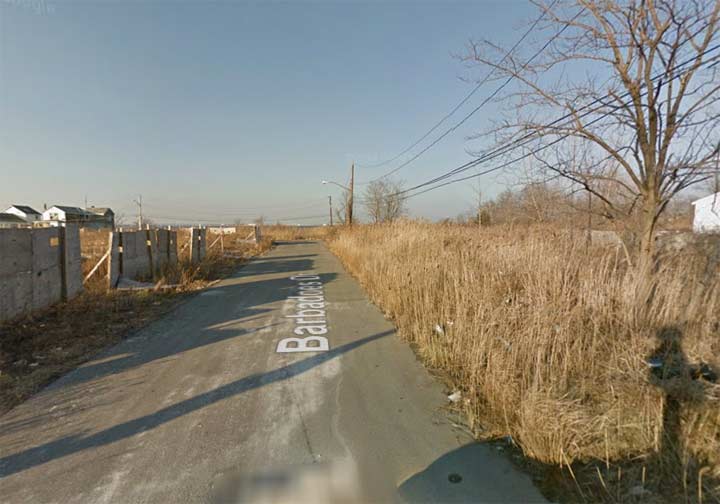 This is my initial FNY post on the neighborhood of Somerville, which is on the Rockaway peninsula north of Arverne By the Sea and the A train tracks. I’ve never had much interest in it since it’s fairly sleep-inducing, with quiet streets and houses of no great historic import, but it does have one unusual characteristic — the mysterious Barbadoes Drive.

Older printed maps have it as a fairly lengthy street arising at Beach Channel Drive and Beach 87th, continuing along Broad Channel to Beach 84th. At that point it’s interrupted by both the Barbadoes Basin and Vernam Basin, two short inlets of Broad Channel, as well as the “wye” interchange that takes the A train over the bay.

East of here, Barbadoes Drive is mapped to begin in Somerville at Burchell Avenue, run north and then turn east at a 90 degree angle, ending at Beach 65th. However, only a small portion or two of Barbadoes Drive exists.

One is a short stub at a flats fix joint at Beach Channel Drive and Beach 87th, trailing off into the weeds. It does have one house on it that may be addressed as on Beach Channel Drive; I’m unsure. The other is pictured above, running from Burchell Avenue two blocks north to a dead-end stub of Hillmeyer, crossing Almeda Avenue (which ios not to be confused with the Alameda Avenue in Douglaston). This is a Google Street View image from 2013, so it’s possible the lots on either side may have been built up by now.

Whence the name and the extra “e”? Barbados, of course, is an island nation in the Lesser Antilles near the islands of Grenada and St. Vincent and the Grenadines, with Venezuela the closest South American mainland nation. It attained independence from Britain in 1966 but is still part of the Commonwealth. It’s possible that ships bound for Barbadoes may have left from Barbadoes Basin on the Rockaway peninsula, and the “e” snuck in there as a mistake on a handwritten document. My guess, at any rate.

Comment as you see fit. The FNY comments section is once again operational.

“Comments” are back? Glory be! Let the FNY Universe rejoice!

Regarding the extra “e”, I should point out that the original name of the city of Hackensack, back when it comprised much of what is now Bergen County before being snipped up into dozens of smaller municipalities, was New Barbadoes, so spelled.

about City improvements in the area of Barbadoes.

Our church just purchased the property pictured. 603 Barbadoes Drive will be the future House on the Rock Church and Community Center. I loved this article. Thanks for sharing!