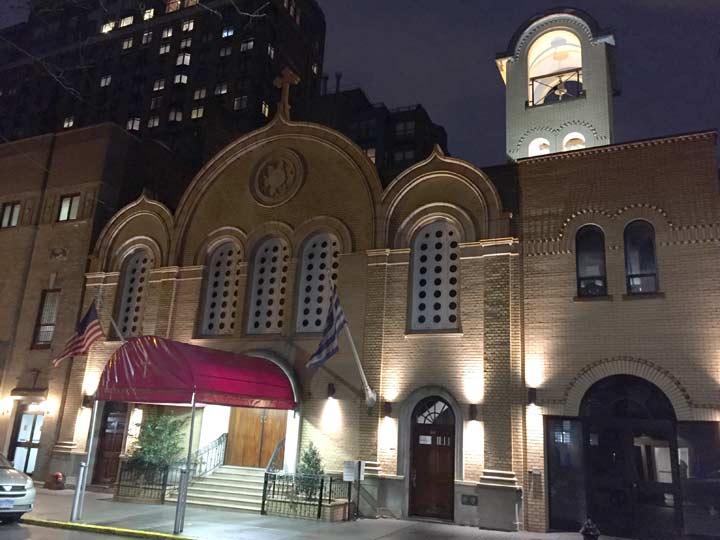 Schermerhorn Street is an east-west downtown Brooklyn street running between Clinton Street and Flatbush Avenue a block south of Livingston, named for a merchant family in the early 1800s. Abraham Schermerhorn’s daughter Caroline married into the Astor family and became the famed Mrs. Astor of the Four Hundred fame, which determined anyone who was anyone in high society in the late 19th Century. When I first encountered the name on maps as a kid, I assumed the name was pronounced SKER-mer-horn, but I discounted the overwhelming Brooklyn proclivity to drop R’s; thus, most Brooklynites say SKIM-mer-horn.

The block between Boerum Place and Court Street is an interesting one, home to the MTA Transit Museum in the decommissioned Court Street IND station as well as a former Romanesque Broooklyn Public Library built in 1887 at Number 67.

The featured building, though, is the Sts. Constantine and Helen Greek Orthodox Cathedral at #64, a remnant of a once-bustling Greek presence in the neighborhood. The corner stone was laid in 1916 and the cathedral, with distinctive arched facade and small porthole windows, was completed in 1922 with additions in 1945 and 1960. It is the oldest Greek parish on Long Island and one of the oldest in New York State. After the downtown St. Nicholas Greek Orthodox Church was destroyed on 9/11/01, Sts. Constantine and Helen took in its congregants.

Comment as you see fit! Comments are once again operational.

My parents were from Cypress Hills. My father went to school (St James on Jay St, just before it became Bishop Loughlin and moved to the building its still in on Clermont Ave in Clinton Hill) and worked in downtown Brooklyn and knew it very well. He pronounced Schermerhorn as “skim-a-horn” (as in “take the A train to Hoyt and Skim-a-horn.”) The first r was silent.

I went to elementary school for several years on Schermerhorn St., and never said or heard it pronounced any way other than as spelled.

But then, I never called a pink Spalding a “Spaldeen”, either.

what about a “pennse pink”

Nah, those Penn brand balls didn’t quite hack it, seeming to lose their bounce in pretty short order compared to the Spaldings. Plus, their somewhat glazed-feeling surface just didn’t have the tactile appeal that made the Spaldings “grippier”.

Even with its premium price, the Spalding, at twenty-five cents, seemed a better buy than the fifteen-cent Penns. Quality wasn’t cheap, even in the 1950s.