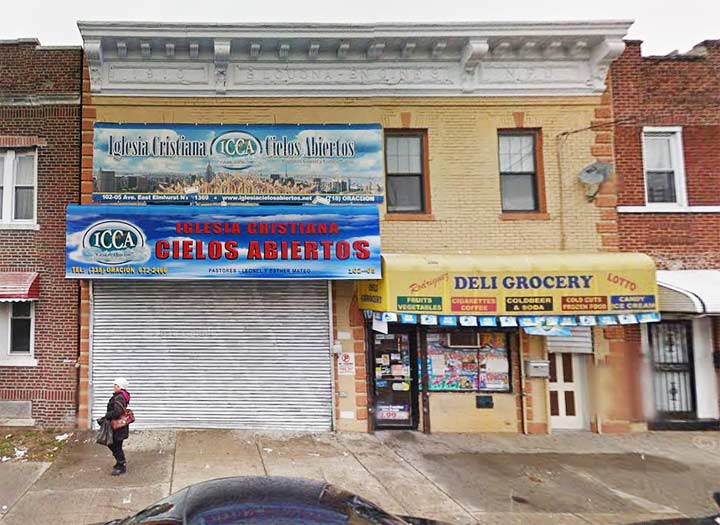 I recently became aware of a former firehouse in Corona, a handsome yellow brick building on the north side of 32nd Avenue between 102nd and 103rd Streets. I haven’t had time to get over there, so I’ll use the Google Street View shot. I’m afraid this post will bring up more questions than answers, so I may have to depend on ForgottenFans here.

If you look closely at the roofline under the pediment you’ll see it says “1910, Louona Engine 8, N.F.D.”

This much I know: a section of East Elmhurst used be called Louona Park in the early 20th Century and for awhile National Street, which runs across the grid between Roosevelt and Corona Avenues, was called Louona Avenue. Anyone know the origins of this unusual moniker? It’s a rarely-used feminine name, but that’s all I got.

The fire company was established in 1910, according to Jason Antos and Constantine E. Theodosiou’s Corona: The Early Years and was housed in this brick building by 1920. Today it is home to residences, a storefront church and a deli and little of its firehouse past is visible, except for the roofline inscription.

I would imagine that N.F.D. stands for Newtown Fire Department. Local FDs became a part of the FDNY after the 5-borough consolidation in 1898.

BEFORE THE SUNSET: 4th Avenue and 39th Street

https://astoriahistory.smugmug.com/Postcards/43-Queens-Firemen/i-DXzCFDs
Might as well show this earlier version too, from Astoria Historical Society’s fabulous photo archives. 🙂

Wow! Just seeing this. Great find Kev! This is currently East Elmhurst bordered by Northern Boulevard to the South, Ditmars Boulevard to the North, Grand Cetral Parkway to the East, and Junction Boulevard/94 Street to the West. I grew up right across Northern Boulevard on 98th Street between Northern and 34th Ave and attended Louis Armstrong Middle School in the early 80’s. The firehouse is just three blocks uphill East of the Fisher Pool we snuck into on Summer nights. There are likely plenty of other nondescript storefronts throughout Corona that were once of community significance. I don’t remember ever noticing this because it looks like any other bodega in Corona. We walked past them everyday and had no clue. This one is a gem because it still has a legible inscription above and remnants of an old engine house.
Thanks to Andy as well for the vintage link!

A 1902 Newtown Register real estate article touts the Louona Park development, owned by one Baylies. The sole agents were the 5th Avenue firm of Osgood Pell & Co. Found it on Fultonhistory. Various purchasing options are given.

Louona Engine 8 of the Newtown VFD was organized June 8th, 1896. It was originally located on Northern Blvd and 103rd St. Jan 6th, 1910 they relocated to the firehouse above and were disbanded Sept 1, 1913.