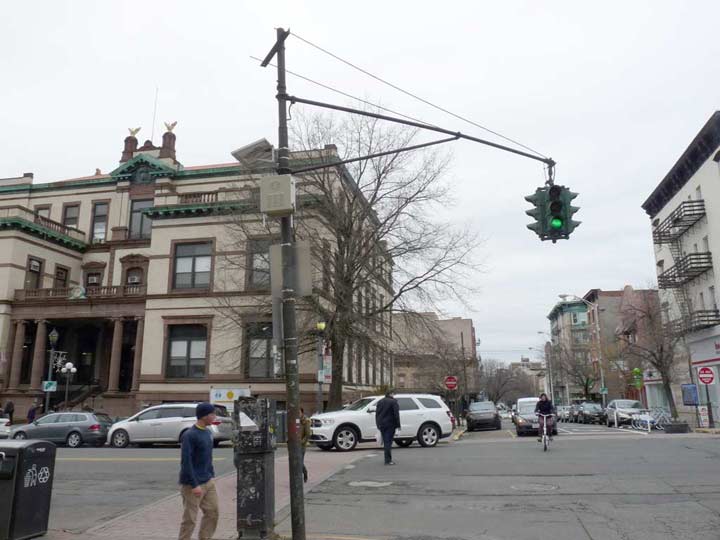 I worked in Hoboken most of 2016 and was endlessly fascinated with this aged guy-wired stoplight on Washington and 1st Streets, across from the Hoboken City Hall. I was disappointed to hear that the post will not remain in place much longer, as Washington Street is due to undergo a complete renovation that will include new sidewalks, truck loading bays, new streetlamps, and finally, an update of the stoplight situation, which has been desperately in need of addressing for decades.

Just one stoplight controls traffic on Washington Street for most of its cross streets from Observer Highway north to 14th Street, including this veteran. The project calls for the institution of the usual traffic signal setup on major urban routes: two corners with traffic signals, and pedestrian control signals featuring “the hand” and “the man.”

This is possibly the oldest working stoplight in the United States, having been installed between 1925 and 1935. The manufacturer is the now defunct Horni traffic signal company. The stoplight cannot be retrofitted with bright LED signals, and the lamps appear dim in bright sunlight.

The post will likely be relocated to the Hoboken Historical Museum.

Yes, but there were no national standards, so amber in one town, but not in the next…or even within one town. Those were more interesting times in the eyes of us signal collectors.

At this point, Horni Signal Manufacturing Corporation is actually still considered an active business entity in New York State. Their filing date was July 17, 1926 and have a business address of 183 Varick Street in New York.

Yellow was used in the 1920s. NYC just didn’t want it used because they thought it encouraged motorists to race out the red light.

As of October 20, he signal has been installed in the Hoboken Historical Museum. I was privileged to be involved in the project, and I have posted a page on the event here:
https://gardenstatesignals.net/the-hoboken-historical-museum-signal/