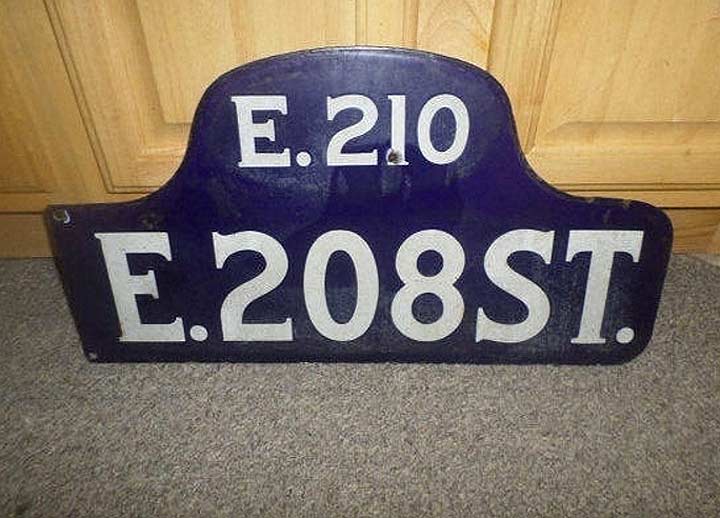 Manhattan and the Bronx shared this “humpback” street sign design from the 1910s into the 1960s (the last example was removed around 2000) since until 1914, they were the same county.

Numbered streets meeting numbered streets happens in Manhattan, where West 4th meets West 10th through 13th Streets. This happened because the western end of West 4th used to be called Factory Street but was changed in the early 1800s to West 4th, causing the seemingly incongruous intersections. 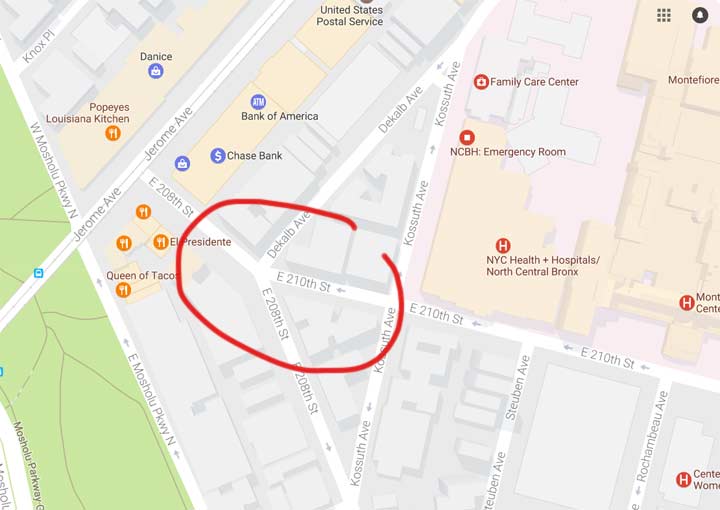 It also happens in the Bronx, in which city planners did their best to impose Manhattan’s gridiron. However Bronx topography defied this plan at every turn, as well as the decision to place large parks as well as parkways linking them. Take a look at this section of Norwood — here the grid system takes flights of fancy, with some streets parallelling Mosholu Parkway and others parallelling the other main street in the area, Bainbridge Avenue. It turned into something of a mishmosh, with a very odd triangle of streets defined by DeKalb and Kossuth Avenues and East 208th and East 210th, which come together. (East 209th can be found east of Reservoir Oval.)

There are other such numbered street intersections in the Bronx, and one day when I’m bored to death I’ll make a list of them.

“Comment…as you see fit” Comments are once again active in FNY.

I’ve walked, ridden and driven through this intersection many, many times. My grandmother lived on DeKalb Av between E Gun Hill Rd and Kossuth Av. The car was always parked facing E208/E210 St so every time we left for home we would pass through.

Interesting that there is also a Kossuth Place in Brooklyn right next to DeKalb Avenue.

I’ve always wondered why this section of E. 210th St. is called that, rather than E. 209th St. Calling it 209th wouldn’t conflict with any other segment, and it would be between 208th and Gun Hill Rd., which people consider to be 210th St. Having a section of 210th St. that is separate and distinct from Gun Hill Rd. messes up that identification.

I’ve lived in Norwood since 1974. The street layouts are fascinating! Been on E.205th Street since 1975. If you walk west to the end, you’re at the corner of E. 204th and E. 205th. That’s where the street named Bainbridge Avenue, heading south, makes a right turn and heads west, retaining the Bainbridge Avenue name. The road that continues on towards Webster is named E. 204th. Crazy!!!

I LOVE seeing these old maps.