In my appreciation of the city’s eternal green public spaces, I enjoy documenting the history of parks big and small. Throughout the Five Boroughs, triangular parcels are formed at places where street grids collide. Too small to develop, they are set aside as parks under the Greenstreets program. In the Bath Beach neighborhood of Brooklyn, one such example is the .043-acre Private Anthony Catanzaro Square. 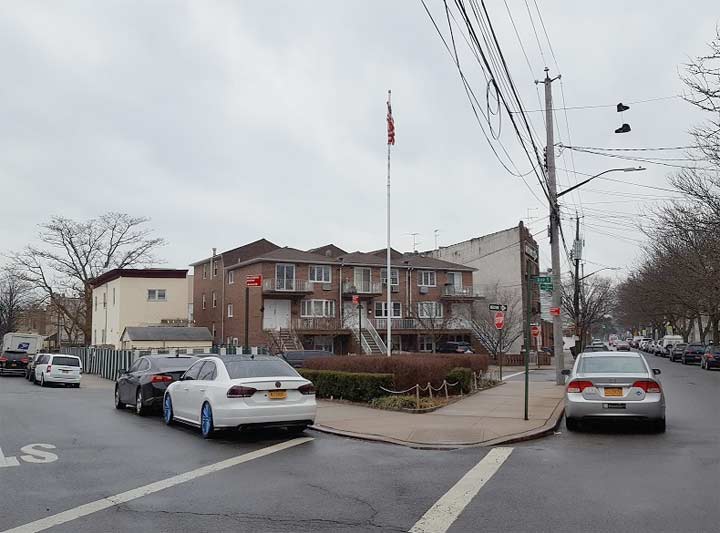 Such parks receive little respect, many of them named after local individuals but lacking the historical signs to explain their namesakes. I tried to correct this injustice by putting these small parks on Wikipedia and quickly found them proposed for deletion by other users. Their alibi being that these tiny parks do not have enough “notability” to merit a Wikipedia page. If the prudes at Wikipedia succeed in deleting my hard work, fortunately there is Forgotten-NY , where no place is too obscure for documentation. 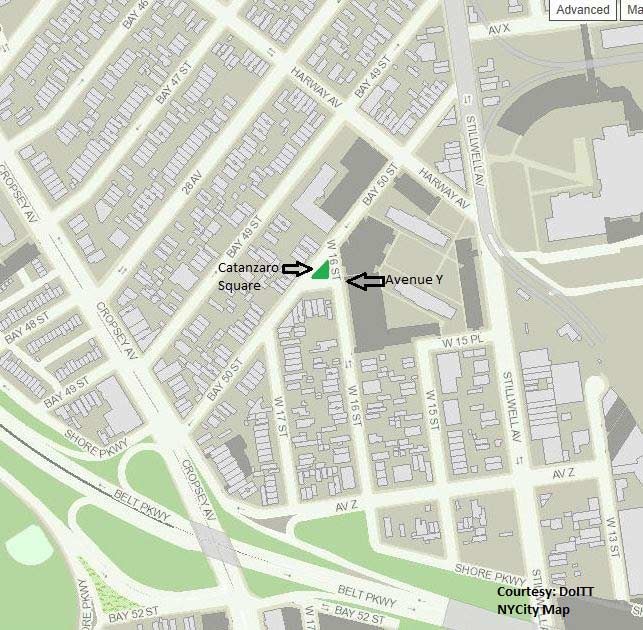 Anthony Catanzaro Square is formed by the northern end of West 16th Street at the same place where Avenue Y meets its western end, with both of these roads meeting Bay 50th Street. Particularly notable is Avenue Y, an orphaned segment containing four addresses and nearly a half mile to the west of where Avenue Y picks up again at Gravesend and Sheepshead Bay. The vast Coney Island Yard cuts this avenue into two segments. A third easternmost segment of Avenue Y is found in Bergen Beach. West 16th Street represents a mainland penetration of the Coney Island street grid, while Bay 50th Street is part of the Bensonhurst-Bath Beach grid. Avenue Z also has a segment in Bath Beach, stretching for five blocks. 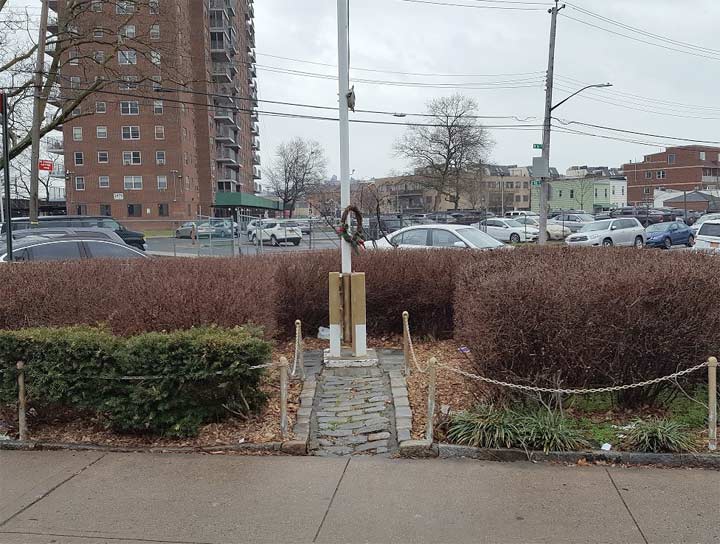 At the onset of World War Two, Bath Beach had a sizable Italian-American community. The Catanzaro family lived across the street from the undeveloped triangle where three grids met, their oldest son Anthony was born in 1916. Fighting in the 322nd Fighter Control Squadron, PFC Anthony Catanzaro’s ship was on its way to the front in Italy when it was torpedoed on November 26, 1943 by German forces. Catanzaro was posthumously awarded the Purple Heart medal and buried at the nearby North Africa American Cemetery in Carthage, Tunisia.

In this war, his younger brother Joseph (1919-2015) survived the June 6, 1944 invasion of Normandy and returned home vowing to honor Anthony. Through the efforts of Joseph , a flagpole was installed and shrubs planted at the site, lovingly cared by Joseph who raised the park’s flag each morning. In 1963, the City Council designated this triangle as Anthony Catanzaro Square. 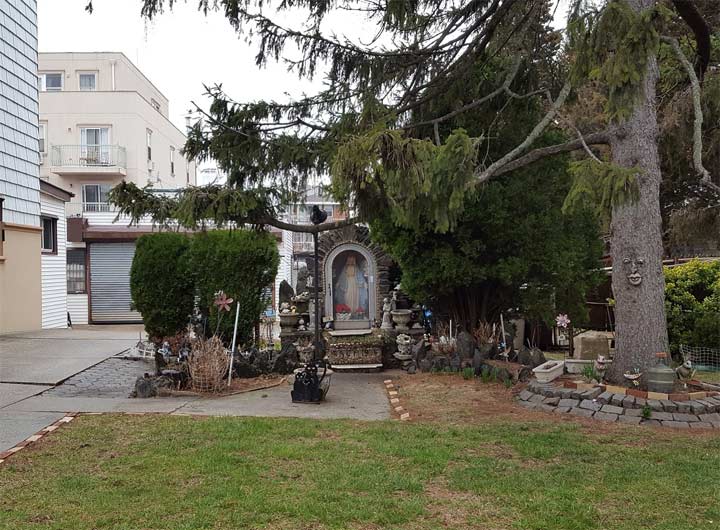 The immediate vicinity of Catanzaro Square is not exactly a tourist hotspot, but there is one local curiosity of note down the block at 114 Bay 50 th Street, a front yard shrine to the Virgin Mary. Such miniature shrines are popular among Italian-American homeowners, but Anthony Vespoli’s shrine is like a miniature garden. In particular, the smiley face on the tree.

“Comment as you see fit.” Comments for FNY are once again open!

I love this! Thank you for documenting these parks and not letting their history be lost to time. I just don’t understand the thinking over at Wikipedia.

I neglected to mention that in relation to Avenue Y, the shortest street segment in Brooklyn is probably a piece of Dahill Road at 47th Street, which has just two addresses on it. Kevin Walsh documented it.

The most famous short street in the city that does not have other segments is Edgar Street in downtown Manhattan.

After 50 plus years of culture war it’s so refreshing to see honest expressions of patriotism like this. sad to see Wikipedia used like just another social media trolling opportunity. Knowledge is power.

I grew up on Bath & Bay 38th.I hung out at the candy store on Bay 50th & Stilwell.Still visit the area several times a year and am familiar with this.I think it’s great that you took the time and effort to post it.Wiki doesn’t care because it’s too small?A young man made the ultimate sacrifice for his country!

Wikipedia attracts too many nerds who have nothing better to do with their time.

Living on Cropsey Ave and Bay 50th St from 2001-2010, I drove past this triangle almost every day. Thanks for filling in the blanks. His brother survived Normandy and lived to be 96. Good long life, and good for him to honor his brother and raise the flag daily.

WITHOUT THESE REMINDERS HERO’S LIKE THIS WOULD BE FORGOTTEN IN TIME.I REMEMBER GOING TO SCHOOL DURING THAT WAR AND SEEING A FLAG IN THE WINDOW OF A NEIGHBOR WITH 5 STARS DISPLAYED ON IT 3 BLUE 1 SILVER 1 GOLD REPRESENTING THE FIVE BROTHERS THAT WERE SERVING IN THE SERVICE BUT NO SIGN FOR THIS FAMILY EXCEPT WHAT I SAW ON MY WAY TO SCHOOL IT IS SO SAD THAT THEY GAVE SO MUCH AND HAVE RECEIVED SO LITTLE AND WHEN I PASS WHO THEN WILL REMEMBER EXCEPT THE FAMILY.

This is great. Thank you. My family has lived here for years. There are still relatives of the original owners living there as well. Thank you.

Lived on Bay 50th for many years, first time hearing the story. Thanks.

I have been reading Sergey Kadinsky’s “Hidden Waters Blog,” with much fascinating riverine and NY waters history, here:

A shame it gets very few comments; it’s really wonderful!

I always wondered about this triangle and what it was a tribute to. Thank you for this, I will share this knowledge with my children.