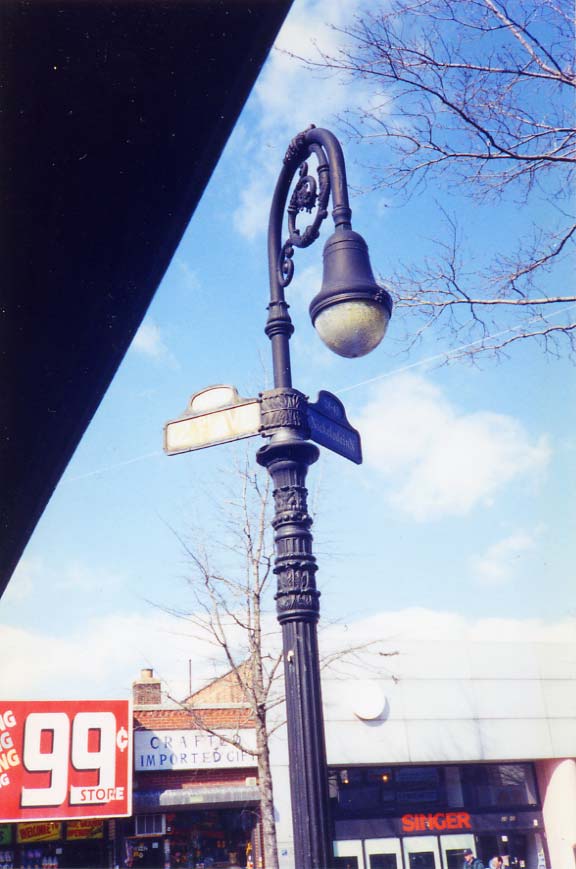 I don’t think I’ve mentioned the short-statured Bishop Crook found on the east side of Steinway Street north of 30th Avenue in front of the Riou Bar & Lounge (which was there in 2017). It is either a short Crook used under elevated trains, or else has been sawn off to its current height. It still has the original brackets and frames used for street signs; over the years, owners of the storefront directly in front of the post have placed the names of their businesses in it. Unfortunately with this sun angle I didn’t get the name that was there in 1999 when I shot the photo. By 2016 the signs had “New York Hair Salon” and the Riou had declined to replace the signs with its name. The glass reflector bowl had also disappeared, and I’m not sure the lamp is functional, not having been here at night. 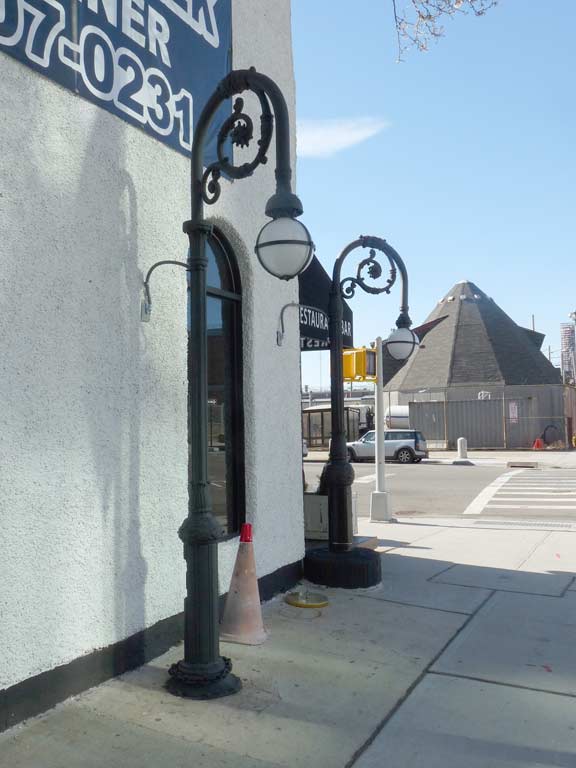 For some decades, the Waterfront Crabhouse restaurant at Borden Avenue and 2nd Street in Hunters Point has had a pair of Bishop Crook lamps outside the front entrance, and they have survived despite a change in ownership. These are more clearly hybrids, being Type B park lamp bases with Bishop Crook masts rather crudely affixed at their apices. This combo has never been used on a NYC street.

TURN IT UP TO 11, Flushing Line

The Astoria Crook was placed there by the folks who had opened a restaurant/bar at that location about 30 years ago called The Nickelodion. Somehow,they obtained the top portion of a city streetlight and buried it in the sidewalk. The City apparently thinks that it is theirs, as they installed a LED luminaire on it when Steinway St. was converted about four months ago. Of course it does not work since the power comes from the restaurant building,not a Con Edison feed.
There are some other examples of purloined City streetlights I know of. Gone now,but at Sixth Avenue and one of the streets in the flower district( I think 26th Street), there was a lot at the corner used by one the companies to store pots and other things related to the trade. Also in there was a complete City Streetlight laying on the ground. It was a twin cast iron light pole with the incandescent City luminaires still attached.
Astoria Park was converted to mercury vapor starting in June of 1968. I only got to see Welsbach running new conduit for powering the park lamps. I was with my”Uncle” from June of 1968 to June of 1971. Sometime in 1971, my old landlady who lived across the street from the park,invited me over for lunch. In the backyard was a complete B park post! She explained that when she saw the crew removing the old poles she offered them $25 for it. They used their crane to drop the pole in her yard.
Best one is in Astoria. When you’re at the GAHS, check out the backyard of the house on the SW corner of 34th Avenue and 37th Street. There is a complete City street light in the backyard. The pole and the house appear to be about the same age. I remember seeing this type of aluminum pole in Astoria at five locations on the streets. They were all removed during the mercury conversion,I guess because they could not hold the extension arm. They were dated 1954. I always assumed the owner of the house worked for,or knew the contractor doing the street light installations and needed a backyard light and a place for his clothes line.

One of the Bishop Crooks located a the Waterfront Crabhouse restaurant at Borden Avenue and 2nd Street in Hunters Point has a Type E base and lower shaft.

The Bishop Crook found on the east side of Steinway Street luminaire has been replaced.

Master Bob ..I know you’ve seen the bottom cover plates with the NYC seal on em?? Only surrounding city hall ??& On the first lamps towards the bridge
!!( Dutch & Indian)??