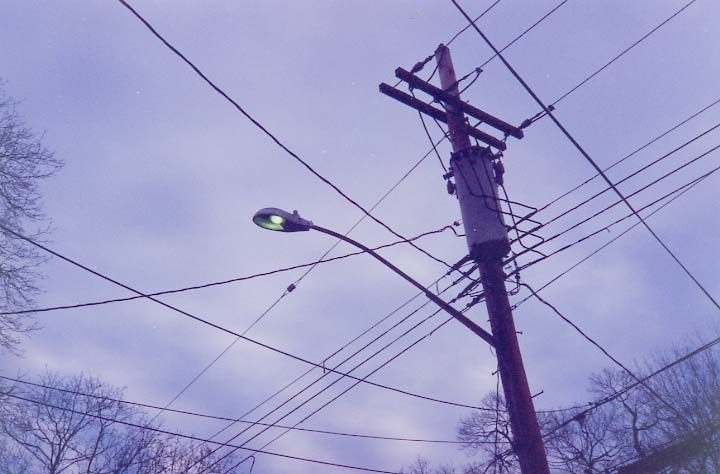 For the years between 1960 and 1972 the General Electric M-100 lamp, a greenish-white mercury vapor variety without a glass reflector bowl, jockeyed for supremacy on the side streets of New York City with a fellow bowl-less make, the Westinghouse OV-8. The lack of a glass bowl must have made these lamps much cheaper than the Westy OV-25s and GE M-400s that were used on main streets (including most of Manhattan). Beginning in 1972 and again in 2009, these specimens for the most part were purged from the streets and new yellow sodium-vapor lamps were installed — but the Department of Transportation didn’t catch them all when they began replacing the old “mercs” in 1972, a mistake that wasn’t repeated in 2009 when virtually all the remaining ones bit the dust.

Everything old is new again, and reflector bowl-less high intensity LED bright white lamps from a  variety of manufacturers are now wiping out the sodium lamps; the deed is supposed to be complete in 2017, but I’m estimating 2019 at the rate it’s going. “Retro” Bishop Crooks or Corvington lamps are getting specialized Bell LED fixtures with reflector bowls.

There are a few M-100s and OV-8s still around in NYC, on unmapped or semi-private lanes. You have to know where to look. And I do.

I believe there’s still one left in Bayside on a dead end street abutting the Cross Island. I’ll have to try and find it again to see if it survived the LED gentrification.

I recall an earlier generation of street lamps…which these replaced.
They had ” frilly “- kind of shades !
Lol…( Gotta find pictures of them,!)