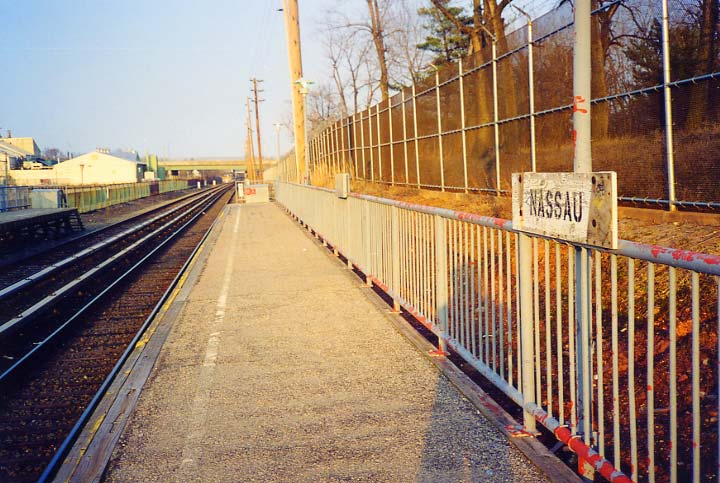 I haven’t had the chance to nip down to Tottenville to see the newest station on the Staten Island Railway, Arthur Kill, which was built between the former Atlantic and Nassau stations (each named for defunct businesses: Atlantic Terra-Cotta and Nassau Smelting; the stations mostly served workers in those two businesses in the early days). The new Arthur Kill station was a good four years under construction (these kind of projects move absolutely glacially in the modern era). The new station opened in January 2017, and Nassau and Atlantic were put out of their misery.

In reality the MTA had all but abandoned the Nassau and Atlantic stations many years ago, keeping only portions of each station open and failing to maintain them. I chronicled their appearance way back in 2007 for FNY’s “Stations of Staten Island Rapid Transit” series.

In 1999, I grabbed this shot of the Nassau platform. At the time it was the only station on the SIR still sporting wood signs with the stenciled name of the station on them. I wonder if anyone has them!

Wow, finally they are gone. Growing up on SI, the Atlantic Station was the closest one for me and I remember the old smokestack that said Atlantic on it (unfortunately I was unaware of the history at the time). My dad worked at Nassau Smelting and I was aware of the station. Thanks very much for this update.

Wow,talk about retro! I’ve never rode the SIR. I’m a Brooklynite so for obvious reasons I never had a reason to ride the railway but I’m going to check out the SIR series you have and read up on some of its history. Love this site!

My late friend Craig (last name withheld) grew up in Tottenville
in the 1950’s. He and his friends used to put grease on the rails causing the train to slide past the Nassau station.