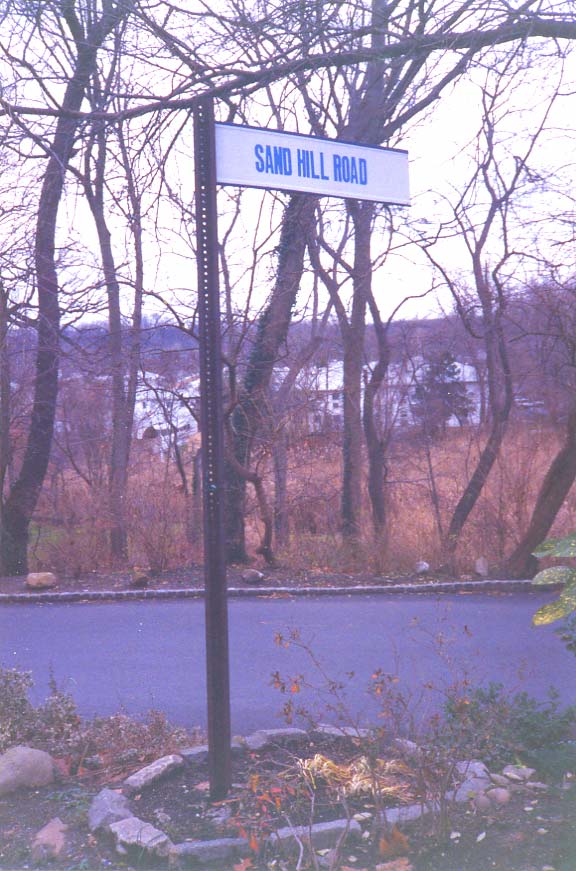 One of the most perplexing situations as far as New York City streets and their names is concerned exists in Douglaston and Little Neck, where a curving road runs across Udall’s Cove (a short arm of Little Neck Bay) and past Aurora Pond between Douglas Road and Little Neck Parkway at the Long Island Rail Road tracks.

I have chronicled this road before as The Street With Three Names. The perplexing situation arises because most of the street is not officially mapped by New York City, and therefore, locals can pretty much call it whatever they please! (A similar situation exists when spelling Arabic names, because no set method of spelling in English names that are not ordinarily spelled with the Roman alphabet was ever devised; hence, you had spellings like Gaddafi, Khadaffi, Qaddafi, etc., etc.)

I found this homemade sign on Douglas Road (that actually has the old Queens street sign colors, off-white and blue) in the 1990s marking the road. “Sand Hill Road” has never appeared on a standard-issue NYC street sign. This sign had disappeared by the mid-2000s.

The confusion will, no doubt, continue indefinitely.

As a native of Northeastern Queens, now living in the Southwestern US, it always interests me to look back at the place of my youth. Your story intrigued me, for what seems to be the all too common City of New York’s ineptness with regards to street signs. I did a little internet searching of my own and found an official New York Parks and Recreation map for Udall’s Cove Park, which can interactively be increased to show great detail of the neighborhood. On the map I found Sand Hill Road starting at the western end of the park, and transitioning into 39th Avenue as one exits the park to the west. So apparently the Parks’s Dept. is aware of the street names, however no one over at the Dept. of Transportation, has made the effort to properly mark this road. I could understand why the few residents on this bucolic road would not mind not having a DOT issued street sign, and make due with their own crafted one, in this precious little enclave of of an Northeastern Queens.

There may be a fourth name in the mix too. When I go to Google Maps and click on some of the houses near the east end of Sandhill Rd/39th Ave (where it curves away from the LIRR tracks) the addresses are shown as 247-xx Cherry Street. Hmmm…