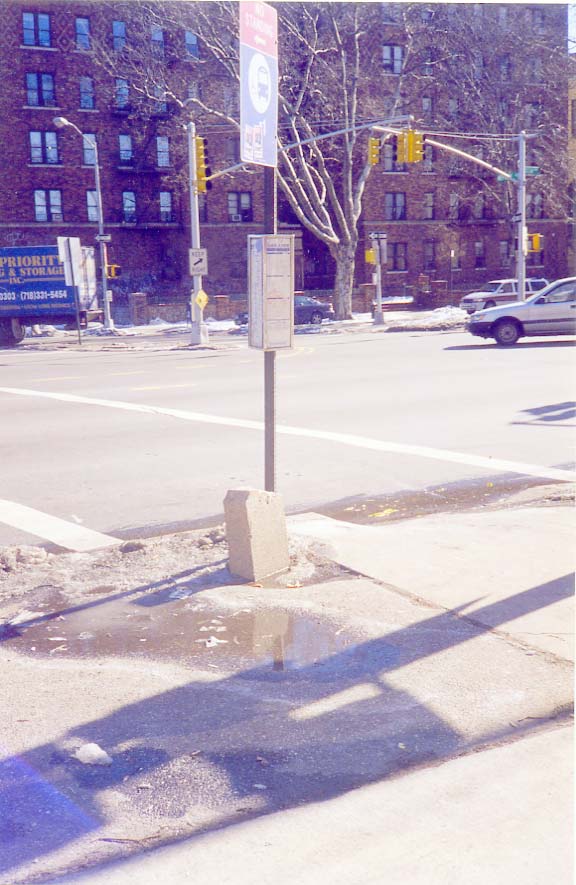 Before about 2000 or so, there was an object that closely resembled a tombstone, at least from the back, at Ocean Parkway and Neptune Avenue in Coney Island. That year a crew moved in, repaired the sidewalk, and likely smashed up the “tombstone.”

It was once a milestone on Ocean Parkway, which was built between 1874 and 1880 in mid-Brooklyn from Prospect Park south to Coney Island. A milestone was placed every half mile, but over the decades, every one had disappeared or had been removed by 2000 except the 3-mile marker, south of Avenue P, and the 5-mile marker here. Today only the 3 mile marker remains.

Bklyner has more including research by me and by Gravesend’s Joseph Ditta; and Ditta produced a map showing the original locations of the milestones based on research by Richard J. Koke.

As always “Comment…as you see fit” in Comments.

I can remember people riding horses in the bridle path on the eastern side of Ocean Parkway back in the 1950’s. The stables were up at Prospect Park.

Before I left Brooklyn for Rockaway in 1958 the police had a stable across the Belt Pkwy from CI Hospital(across Ocean Parkway from Lincolin HS)are the stables still there??????????

When I was training at CIH in 1995 there were no stables. Plenty of Russians though!