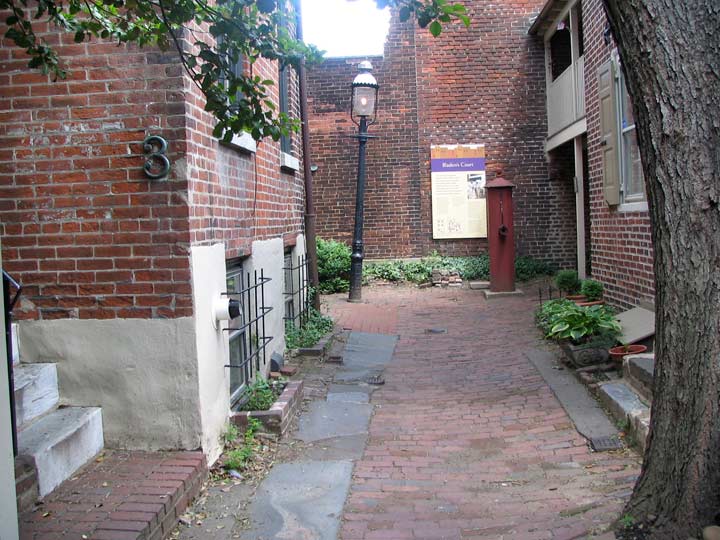 There was a time when I left NYC and went on trips fairly regularly. The last time I visited Philadelphia was in 2008. When poking around center city, I wandered down Elfreth’s Alley, running between Front and 2nd north of Arch, which is a pretty busy tourist attraction because it’s preserved a great deal the way it must have looked when it was laid out in the 1730s. Artisans that included cabinetmakers, silversmiths, pewterers, glass blowers, and wagon builders congregated on the alley as well as teachers, merchants and clergy. 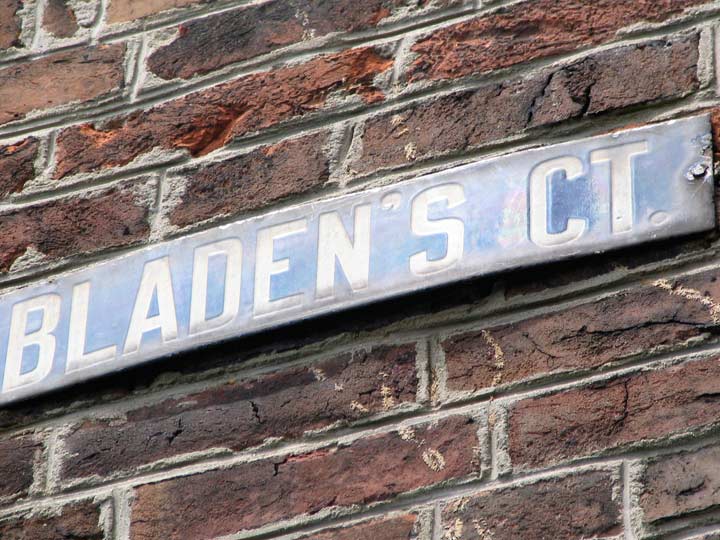 Unlike NYC Philadelphia is chock full of dead ends and alleys that go only one or two blocks. I was somewhat surprised that even Elfreth’s Alley has a dead end blind lane issuing north from it near Front, a pedestrian-only lane called Bladen’s Court and it comes complete with a blue and white enamel sign and historic-appearing electric lamp.

Three residences face the alley. I do not know what the red object at the rear of the alley is, though it may be a pump for a well. If you know, tell me in Comments.

Yup, it’s a replica of a well pump

As you undoubtedly know, that is a gas lamp. Philadelphia had gas street lighting relatively late, the last lamps removed in 1959, but they were in West Philly, and not near Elfreth’s alley. A large number were sold and electrified and you still see them around, perhaps that is where the one in your picture originated.

Philadelphia is also notorious for a street to run for a couple of intersections, then disappear for several more blocks, to then appear half a mile or even a mile away.

In Philly streets can reappear MILES away!

The gaslight looks identical to hundreds in the communities of South Orange, Glen Ridge, and Llewellyn Park, NJ, except for one thing. The light source should be glowing mantles (a salted fabric) that hang from the top of the glass enclosure, so the one in Elfreth’s Alley looks wrong with the glow in the center of the glass. I suspect it is an authentic gaslight fixture fitted up with an electric light. We do have some leaning like that in South Orange.