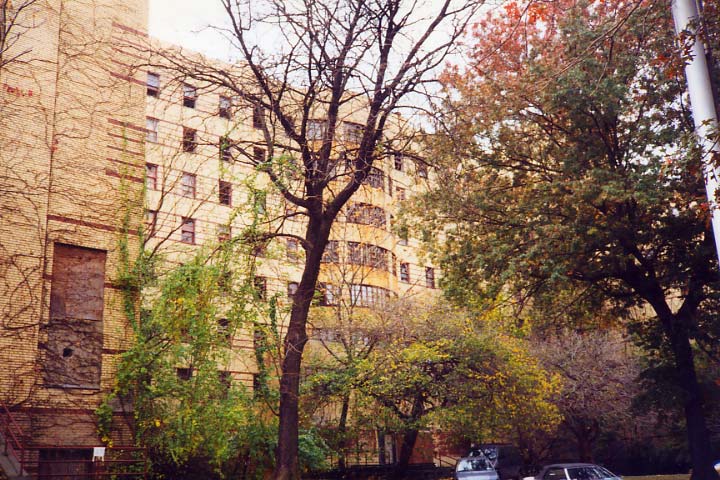 Goldwater Hospital, on the south side of Roosevelt Island near the Queensboro Bridge, opened in 1939 and was named for Dr. Sigismund Schulz Goldwater, health commissioner under Mayor Fiorello LaGuardia (and not Republican Senator and 1964 presidential candidate Barry Goldwater, as some may believe).

The Goldwater Hospital was a monument to the golden years of public health in New York City, designed in distinctive chevrons to offer light and air to all its patients. The rooms had terraces to allow patients direct access to fresh air, and each ward featured a solarium. The hospital had 2,700 windows. [NY History Blog]

The hospital marked a shift in philosophy for research hospitals away from infant mortality (as vaccines were developed that slowed the trend) and toward the problems associated with aging, reflecting a growing NYC population. The War Department (now the US Department of Defense) also researched malaria treatments and food deprivation studies on volunteer subjects during the WWII years. 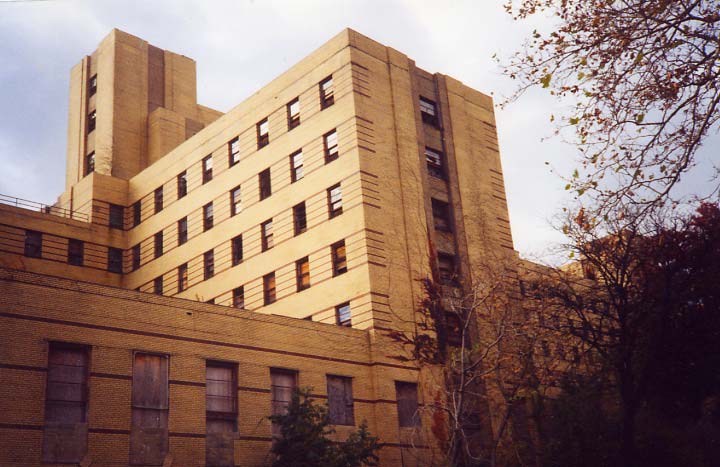 The Goldwater also treated polio patients (President Roosevelt suffered from it) and ran a wheelchair repair shop on its grounds. The hospital also had a well-regarded nursing school. Jazz singer Alberta Hunter was a nurse and resided on the island for many years. My photos from 2002 are of the hospital’s nurses’ residence.

Artist Charles Giraudet spent several weeks photographing the Goldwater Hospital interiors before its demolition in 2014 to make way for a Cornell Tech campus. Check Giraudet’s website under the heading “Autopsy of a Hospital.”

That’s not goldwater, that was the nurses residence for the two hospitals on the Island (Coler being the other on the north end). This building was north of the tram and QB bridge. It has been since torn down for apartment buildings and condos. Goldwater which is now the Cornell Campus was south of the bridge and immediately north of the FDR monument. It looked almost exact to its sister that still exists on the north end of the island Coler Hospital.

That is not a photograpg of Goldwater Hospital. That is the Nurses Residence.

It is well worth checking out Giraudet’s website…the photos of the hospital are fantastic.

Many of the same features as Triboro Hospital in Jamaica, which seems to also be headed for the wrecking ball.

I thought Norwalk (CT) Hospital, where I have been interned several tines, is nice, but I would stand in line for this one or Triboro. They don’t make them like they used to.