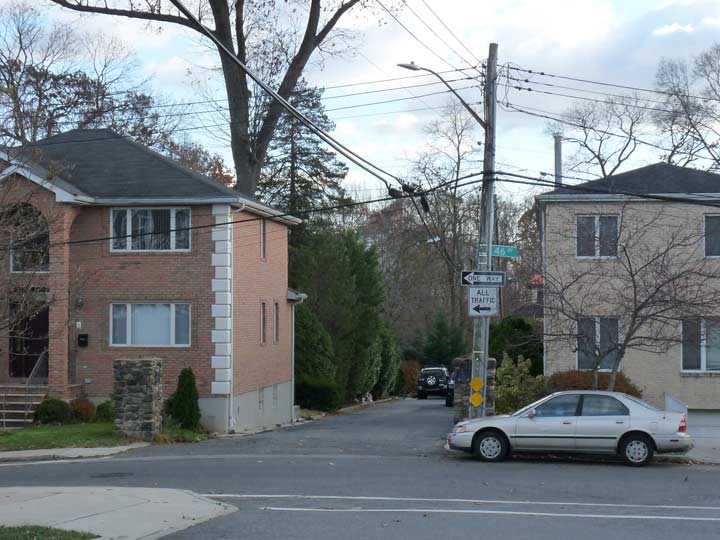 220th Place is a short dead-end on 46th Avenue by Oakland Lake west of Cloverdale Boulevard and south of the Wendy’s and Burger King in on Northern Boulevard where I occasionally have lunch in Bayside. It’s tiny…no sidewalks of any kind, but a no trespassing sign that’s not in the shot. It has secret that has been immune from all NYC revisions since the 1960s. 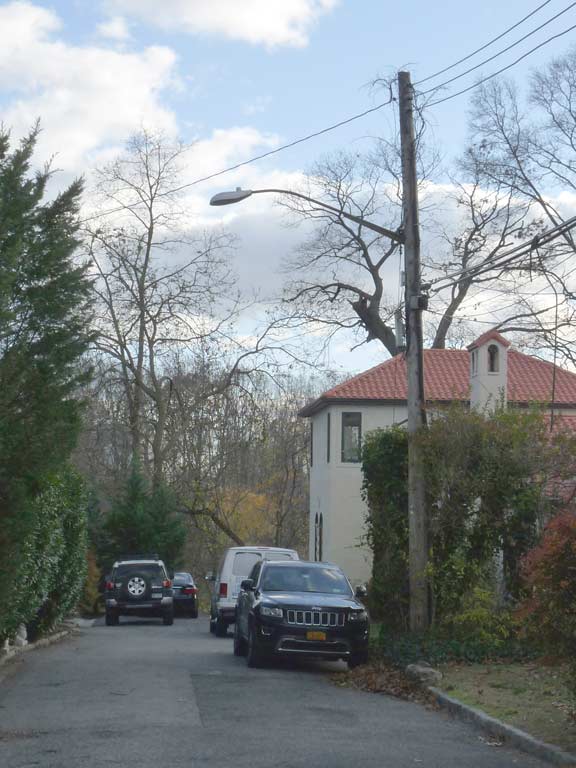 You guessed it: a 1964-era General Electric M-100 luminaire. These were once installed by the thousands on city side streets along with Westinghouse MO-8s, their chief competition. Known as “open-bottom” or “cutoff” luminaires, they were designed to illuminate residential or side streets without a glass reflector bowl in a somewhat dim, greenish white glow.

Though their demise began as early as 1972, when yellow sodium lamps began their lengthy reign, examples were relatively frequent until 2009, when the NYC Department of Transportation installed new models of an updated GE M-400 on virtually every lamp in NYC. Today, only six years later, they are succumbing to the new light-emitting diode (LED) lamps, which shine a brilliant white.

They had, in turn, replaced the incandescent “crescent moons” (#3737) installed in the 1955-1960 period that replaced the radial-wave reflector lamps, which had first appeared around 1915. I remember the “moons” and the “waves” from my youth, but around 1962, the first mercury vapor lamps began their takeover. 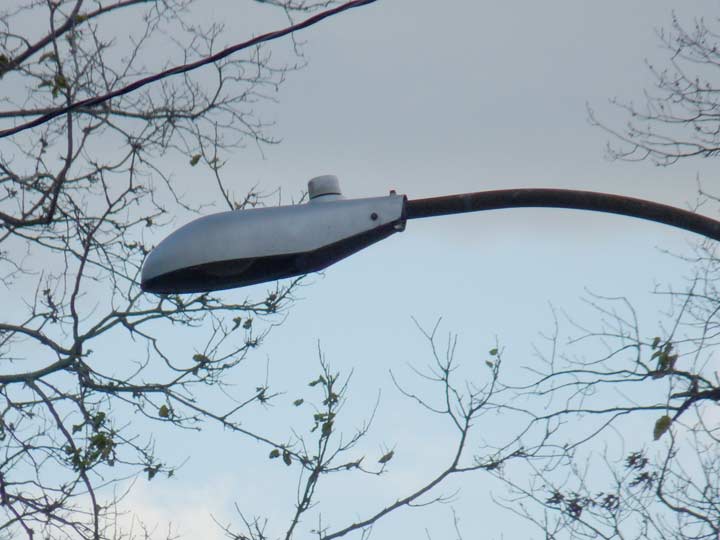 Since 220th Place is a semprivate street, I imagine the Department of Transportation hasn’t been able to touch this M-100 and it will likely stick around for a bit. I haven’t checked if it lights up.

As a kid we used to hang at Oakland Lake a lot. On those dead end back streets there are a few very old and mysterious house that we always thought were haunted.

…so, what is a semiprivate street? One only residents can use but is maintained by our tax dollars?

Not sure of the particulars, but we have several of these in the area and they don’t get paved regularly, some don’t have updated street lighting or street signs. I don’t know the legalities.

82nd Place is a dead-end just south of Atlantic Ave in Ozone Park. It’s actually a private street because the homes face each other instead of their backyards facing each other like the rest of the city and Long Island.

Their property lines go to the middle of the street. Sometime in the early 2000s, the city paved the street, which hadn’t been paved since the early 60s. The homeowners probably don’t realize they may be giving up their rights by allowing others to park on that street.

Hasn’t been replaced by an LED? So THAT’s why the climate keeps changing.