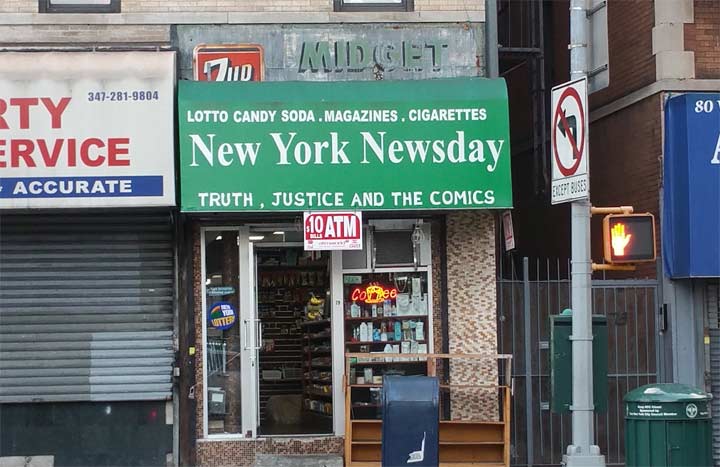 A sharp-eyed Gary Fonville found an old 7-Up sign, as well as the word “Midget,” in back of a newer vinyl awning on East Tremont Avenue in Westchester Square recently. The mind wanders about what the older store was called with the word “midget,” but these 7-Up signs, advertising the lemon-lime carbonated drink, were once all-pervasive around town, as frequently found as the Coca Cola signs.

The drink was formulated in 1929 by Charles Leiper Grigg in St. Louis as the Bib-Label Lithiated Lemon-Lime Soda. The name implies that it once contained lithium citrate, used in the mood-stabilizing drug, which remained part of the recipe until 1948. The origins of the name “7-Up” are unclear but there are several theories: The “7” could come from the seven main ingredients in the drink, while a more outrageous one claims that the “7” referred to the lithium because the element’s atomic mass is 7.

That store was called The Midget Smoke Shop because it was extremely small inside.
They sold newspapers, magazines, candy and of course tobacco products.

That store was there for many many years. It was called The Midget Smoke Shop. It was an extremely small store but they did a tremendous business because the bus stopped directly in front of their door.
Their big sellers were cigarettes, newspapers and magazines.

Not too far from this location on the corner of Crosby and Dudley Aves was a nameless tavern that we called the “Midget Bar,” because it was small space. These were the days before political correctness

I believe I, as a kid, bought newspapers there. Also candy. Mid-60’s.

There used to be a box out front, which the store used to display newspapers to passers-by.

It was covered in a sheet of aluminum. Back in the ‘90’s, after the owner closed and brought all of the papers inside, we’d skate the box.

It was perfect for board-slides, grinds, etc. . .