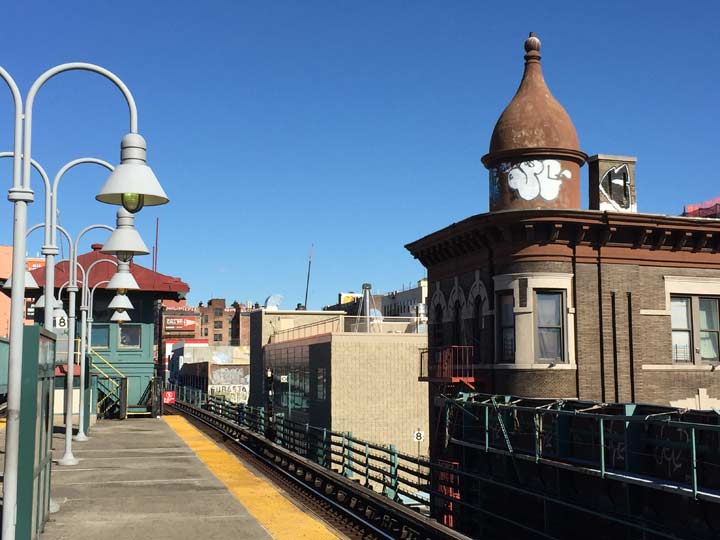 Unlike the IRT Flushing Line, which celebrated its centennial with some fanfare this year, the IRT Woodlawn Line, which goes above an el up Jerome Avenue most of its route, spent its centennial relatively quietly on June 2, 1917, doing what it has always done (apparently a special Metrocard had been issued). To be fair many subways and els are celebrating centennials in the years between 1915 and 1920, and I imagine there isn’t time to mark all of those anniversaries.

This is from an ambulation I undertook in Tremont, Fordham and Belmont in February 2017, starting at the Burnside Avenue station. Running over hilly territory, Burnside Avenue runs from Sedgwick to Webster Avenues between 179th and 180th Streets, divided into East and West at Jerome Avenue. It was named for Ambrose Burnside, a Civil War general who had a mixed record. He later became Rhode Island governor and later, a senator from the same state.

… Burnside had repeatedly demonstrated that it had been a military tragedy to give him a rank higher than colonel. One reason might have been that, with all his deficiencies, Burnside never had any angles of his own to play; he was a simple, honest, loyal soldier, doing his best even if that best was not very good, never scheming or conniving or backbiting. Also, he was modest; in an army many of whose generals were insufferable prima donnas, Burnside never mistook himself for Napoleon. Physically he was impressive: tall, just a little stout, wearing what was probably the most artistic and awe-inspiring set of whiskers in all that bewhiskered Army. He customarily wore a high, bell-crowned felt hat with the brim turned down and a double-breasted, knee-length frock coat, belted at the waist—a costume which, unfortunately, is apt to strike the modern eye as being very much like that of a beefy city cop of the 1880s.

— Bruce Catton, Mr. Lincoln’s Army
His extravagant set of muttonchop whiskers apparently gave rise to the term “sideburns” to mean thick, bushy hair besides the ears shaved short of an actual beard. In Britain the term is occasionally “sideboards.”
I have always been admiring of that cupola on the building besides the station; so many buildings have lost theirs.

Burnside Avenue is the only express stop (platform for all three tracks) between the northern terminus (Woodlawn) and 149th Street/Grand Concourse. Even though I rode the IRT regularly starting in the 1970s, I cannot ever remember regular express service on this line.

You wrote more about the avenue and the general that the El. The Burnside Ave station is the only elevated express station on the line. The other express station is at 149th St in the subway. The Jerome Ave line and the 9th Ave El connection were built concurrently. The only express trains that ran on the line and stopped at Burnside Ave, were the 9th Ave El trains until 1940. The Polo Grounds Shuttle train initially went to Burnside Ave, but was cut back to the 167th St station.

Can attest the 4 train goes express quite regularly to Burnside on this line due to constant el track repairs. I spend a lot of time waiting around looking at that striking old building’s cupola.

As an NYU Heights student in the late 1960s I used this station regularly. Never had any regular express service. This line is a good example of a Dual Contracts elevated built between 1915 and 1922 in The Bronx, Brooklyn, and Queens, with a middle track for either express service (such as the #6 and #7) or for laying up trains.

I have ridden the no. 4 train a number of times. The el runs over River Ave, then after 167th Street, over Jerome Ave to Woodlawn. One interesting aspect of the ride is that for a certain distance, Jerome Ave is in a gulley, as the surrounding terrain is hilly on both sides of the avenue. So even though the no. 4 train is on an elevated structure, you get the impression that it is running on the surface, or at grade level (with the streets). There are some good views of Bronx neighborhoods to be had here. Two interesting stations are Mosholu Parkway, which has the concrete viaduct, and Bedford Park Boulevard, which runs partly on an embankment to the left of Jerome Ave which makes a sharp curve.

Between 170th and 167th Streets, where the el structure swings from Jerome Ave. onto River Ave., look west. There’s a great view of the George Washington Bridge, especially nice at sunset on a clear winter evening.

When I was little, I lived a few blocks west of the Burnside Avenue station of the Jerome Avenue el. This was in the mid and late 1960’s, when the west Bronx was in rapid decline. My father worked in Manhattan but he would never take the (4) train, opting instead to walk under the el station on Burnside continue east to Grand Concourse, where he took the D instead.

I heard that the word “sideburn” comes from the corruption of the name “burnside”. There is a wikipedia page on it and it says that the general had had facial hair in that style.