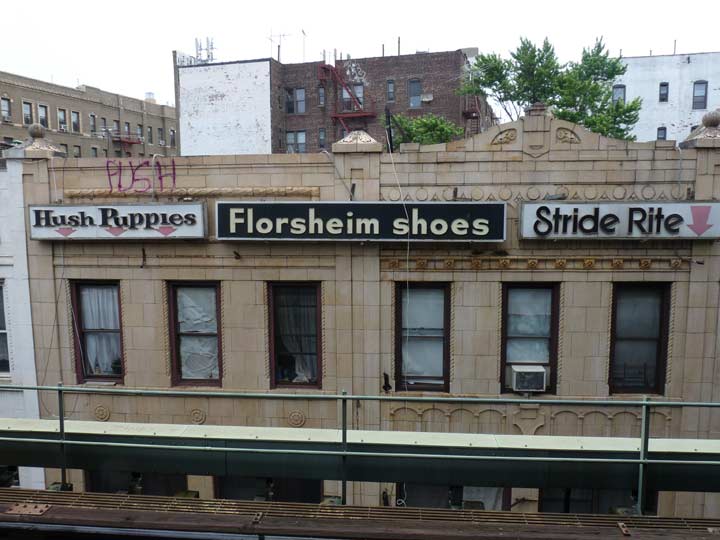 While standing on the Brighton Beach elevated station above Brighton Beach Avenue recently I spotted this trio of shoe ads on the building as seen from the platform. While all three of these brands are still in business, the shoe store below them is not, as it is presently a Jembro housewares store.

Florsheim is the most venerable brand here, was it was founded by father and son Sigmund and Milton Florsheim in Chicago in 1892 (there have been shoe stores in the NYC metro area called “Father and Son” was well.) The family sold the brand in 1953, but bought it back in 2002.

What came first, the fried dough cornballs sold in seafood restaurants, or the shoe brand? The former, as it turns out. The shoe is a division of Wolverine Worldwide, which was developing a casual pigskin shoe in the 1950s and needed a catchy name. Sales manager John Muir, on a visit to Tennessee, would notice that fried cornballs would be tossed to the dogs to keep them from barking and begging during fish frys, and Muir reasoned that “Hush Puppies” would be a good name because they would keep tiring feet from barking like dogs.

I know little about the Stride-Rite brand, but they were my school shoes when I was a kid, and since I’m getting increasingly venerable, so is the brand.

You mention “Father and Son Shoes” in this post. I’m pretty sure that was a brand of the Endicott-Johnson show manufacturer, not related to Florsheim.

Wow! I had stride rites as a kid too…

I remember buying Thom McCann shoes when I was younger.

I grew up in Brighton Beach. That shoe store was owned by two brothers who ran it for years.

Does anyone remember Buster Brown shoes?

I remember getting shoes on 13th Ave as a boy. I can’t remember if it was Thom McCann or Buster Brown. The foot measuring device fascinated me.

I took the same picture last year. My uncle used to sell Father and Son shoes. I probably once bought a pair from him when I was a kid. I remember being so excited about getting a pair of hush puppies.

I bought from THAT STORE when I was a kid.