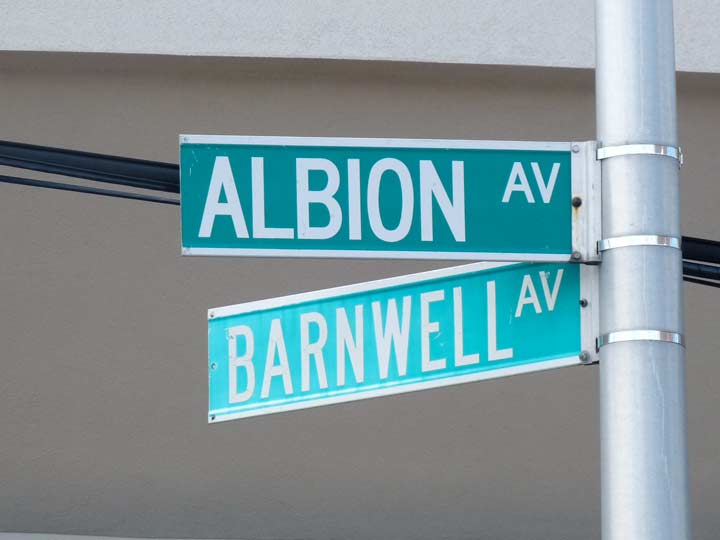 Many years ago, when Queens was a collection of small towns divided by acres of farms and fields, every town and city had its own street naming and numbering system. This was all right when Queens (then also comprising what is now Nassau County) was a separate and self-governing county. Once Queens consolidated with New York City and subsequently became slowly urbanized, this was a situation that could not be allowed to stand as a plethora of Washington Streets, Main Streets, and 1st and 2nd Streets found themselves in the same street directory in the city ledgers.

And so, the Queens Topographical Bureau, under the guidance of C. U. Powell, was set the task of unifying Queens’ street system in the 1910s. To do this just about every street in Queens was assigned a number, except those in historic areas such as Flushing; some existing major roads kept their names, but were assigned the honorific Boulevard or Parkway to replace what was a mere Avenue or Road; the Jackson Avenue – Broadway combination was renamed Northern Boulevard, for example, while Little Neck Road became Little Neck Parkway. Numbered Avenues, Roads, Drives and Courts run east-west, while Streets, Places, Lanes and Terraces run north-south. Streets run from 1 to 271, and Avenues from 2 to 165: why Queens does not have a 1st Avenue is a mystery.

What’s little publicized is that Queens still has several enclaves where streets do have names, and curiously, many of these pockets have names that are alphabetized in order. In fact those places where named streets do survive are dominated by this trait. They were likely bestowed by real estate developers and bear the names of investors, residents or the developers themselves. Rooting out these origins would be Herculean: tellingly, no one has published any books listing the origins of Queens street names, unlike Manhattan (Street Book, Henry Moscow; Naming New York, Sanna Feirstein) Brooklyn (Brooklyn By Name, Leonard Benardo and Jennifer Weiss) and the Bronx (History in Asphalt, John McNamara). Staten Island has thousands of street names, most of them dating to the 1910s, and very few numbers — many of them were named for early settlers in the colonial era.

Herewith are the alphabetically ordered street names of Queens…

Elmhurst: Albion, Barnwell, Cornish, Dongan; Gorsline, Hillyer, Ireland, Jacobus, Kneeland. This is an odd entry because the developer, as was sometimes the wont of developers, jumped around and reversed direction. The E and F streets have been lost or renamed.

Queens Village: three survivors from what could have been more named streets: Davenport, Edmore, Fairbury.

Springfield Gardens has four consecutive alphabetized streets from the back of the alphabet: Roe, Sunbury, Troutville, Ursula.

I must have forgotten a couple. Check out the ForgottenBook, take a look at the gift shop, and as always, “comment…as you see fit.”

But since “45” is “forty-five” when spelled out in words, it’s still an F avenue.

The Forest Hills sequence had a few more south of Metropolitan Avenue:
Sybilla, Ursula, Walnut. You could make an argument that Polo Place could also be part of that sequence.

Glendale (east of 80th Street) had an alphabetical sequence in a 1915 atlas going from at least A to P, with different names for the same lettered streets that had breaks in them! I am unsure if all of these were ever used, as there weren’t many houses in that part of Glendale then!

A lot, if not all, of these street names were named and not numbered because these streets ran diagonal to the grid. I drove a taxi for years in Queens and, once you knew it, the grid really worked. In a flash I could tell that an address belonged to Ozone Park or even the dreaded 60s in Maspeth.

The diagonals were house numbered by geography not blocks meaning the 99-01 was numbered in Forest Hills through all those diagonal blocks along a north-south line no matter where in the block that occurred. Makes sense in a planning office. Makes no sense trying to get a drunk passenger home.

Despite the topographical engineers efforts to unify the numerous street grids into a numerical system of streets and avenues, Queens still has it’s non conformist street prefixes in many areas, over a century later. You can find circles and crescents running in all cardinal directions in Fresh Meadows. You indicated terraces run north/south, however the only ones I know of in Kew Gardens Hills are east/west numbered ones in the 70’s west of Main Street. Douglas Manor is another community that completely ignores the Queens suffix naming of drives in an east/west direction. There you with find several/north south named drives amongst other suffix anomalies. Also worthy of mention is Forest Hills Gardens, which like Douglas Manor, has named streets with suffixes that completely defy the cardinal directions for which those suffixes were assigned.

What happened to Bowne Street?

What happened to Devon Place?

I think there’s an old map mounted on the Forest Hills LIRR station showing that Continental was once the C in an alphabetic series that went on two more in one direction and at least a few more in the other.

Anyone know the origin of a current Queens street: Hoxie Avenue. It didn’t exist prior to the building of Queensborough Community College and the surrounding housing in that part of Bayside. There was a Hoxie who was once president of LIU, an educator. I was wondering if he maybe had something to do with QCC.