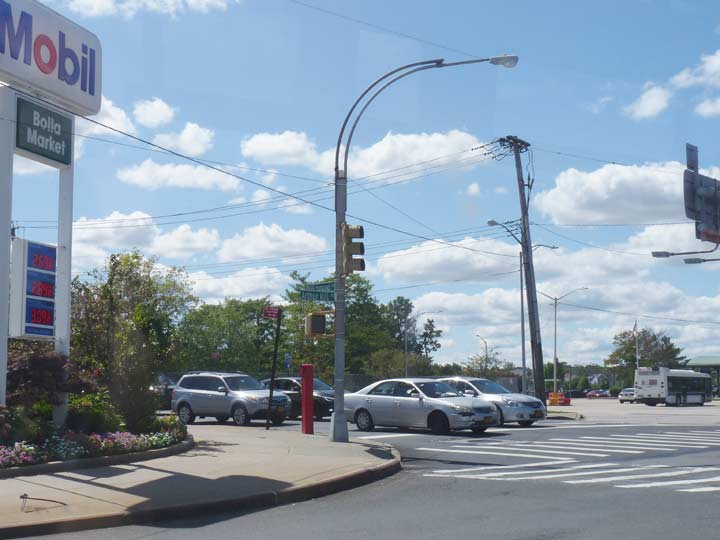 I was looking out a bus window at Richmond Avenue and Arthur Kill Road in Greenridge, Staten Island, when I spotted a rarely-employed double bracket Donald Deskey pole. Never widely used on regular streets, these poles, along with their lengthy Twin versions, found employment in expressway medians because they are long enough to illuminate wide roadways.

They are the cognates of the double-masted octagonal posts (one can be partially seen in the parking lot behind the telephone pole). They first appeared around 1964 and were in use until approximately 1980. They do, or did, have some hotbeds including the old, recently decommissioned Kosciuszko Bridge, as well as Riverside Drive in the 120 streets.

This one is especially notable because it also includes an original Deskey model fire alarm indicator light.

Staten Island used to have a lot of Deskeys, especially on the Martin Luther King Expressway going from Arthur Kill to Tottenville.

I suspect they city installed these type of lamps because this intersection (Richmond Ave and Arthur Kill Rd) was to be a major interchange for the never-completed Richmond Parkway, which dead-ends at an unused overpass nearby. As many of you know, the Richmond Parkway was supposed to go through the Greenbelt and meet up with the Staten Island Expressway about five miles north of this intersection.

I was wondering if you or Mr. Mulero have a picture from about 1975 of the double Desky that was located at the entrance to the Long Island City yard of the Broadway Maintenance Company? I always felt that this was an experimental sample since I never saw one on any street or highway. If I recall correctly, the arms of the pole,rather than starting to curve at the point where they leave the main shaft,went up straight for maybe six feet before starting to curve outward. There were also several braces between the arms. It appeared that this pole brought the luminaire to the same height as a 25′ fabricated steel shaft with the curved extension arm.