FNY’s tour of Turtle Bay, October 16, 2016, was held back a week because of pouring rain a week earlier on October 9, and the crowd was a bit small, but was treated to a brand new tour on Manhattan’s East Side.

Turtle Bay, in the East 40s and 50s from Park Avenue east to the East River, likely takes its name from a Dutch term meaning “bent blade,” probably referencing the shape of the shoreline. It is somewhat hard to believe it now, but along the waterfront slaughterhouses had to be razed in the 1940s to make way for the United Nations complex on 1st Avenue. These days it’s a residential neighborhood prized for its peace and quiet — longstanding residents have included Katharine Hepburn and Irving Berlin. 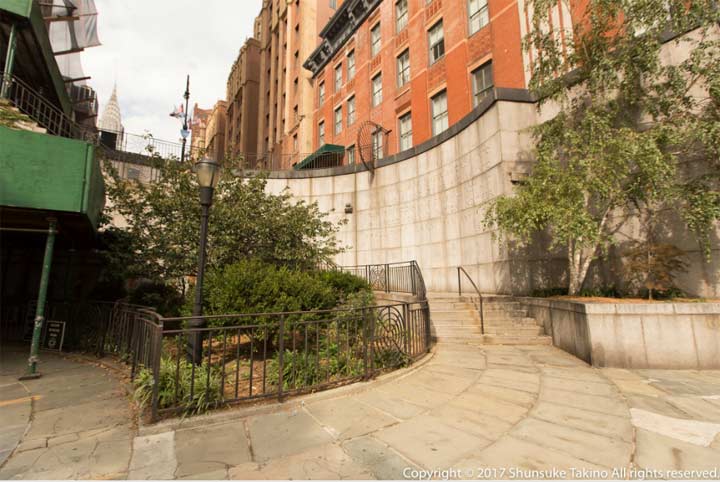 Mayor Ed Koch named these steps leading from 1st Avenue to Tudor City in 1981 for Nathan Shcharansky, a native Ukrainian who worked tirelessly to allow Jews living in the Soviet Union to emigrate elsewhere. 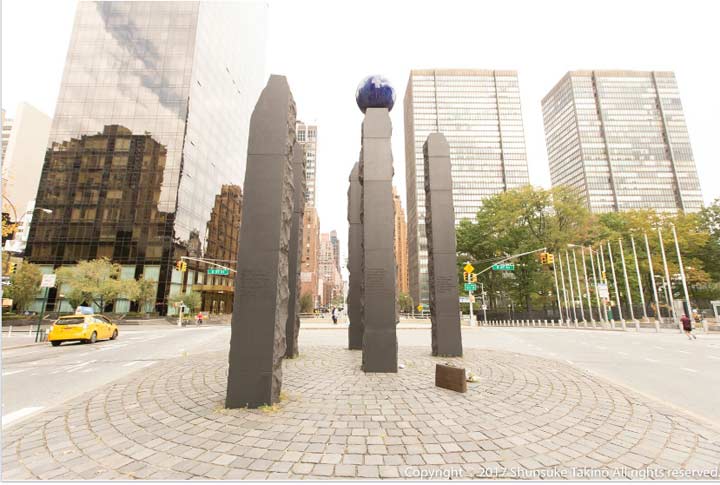 The Swedish diplomat Raoul Wallenberg (1912-1947) credited with saving tens of thousands of Hungarian Jews from extermination by the Nazis in the World War II years by designing counterfeit passports and distributing them to Jews bound for the concentration camps. He also purchased as many houses, villas, and buildings as possible and adorned them with the blue and yellow of Sweden’s flag, thereby making them neutral diplomatic property and a safe havens for Jews.

His whereabouts became unknown in 1945. In 1957, documents were released stating he had died of a heart attack in 1947 in a Russian prison. Suspicions remain that he was killed by the KGB.

This monument to his memory by Hungarian artists Gustav Kraitz and Ulla Kraitz and architects Abel, Bainson and Butz was dedicated on November 9, 1988 on a traffic island at 1st Avenue and East 47th Street along Raoul Wallenberg Walk. 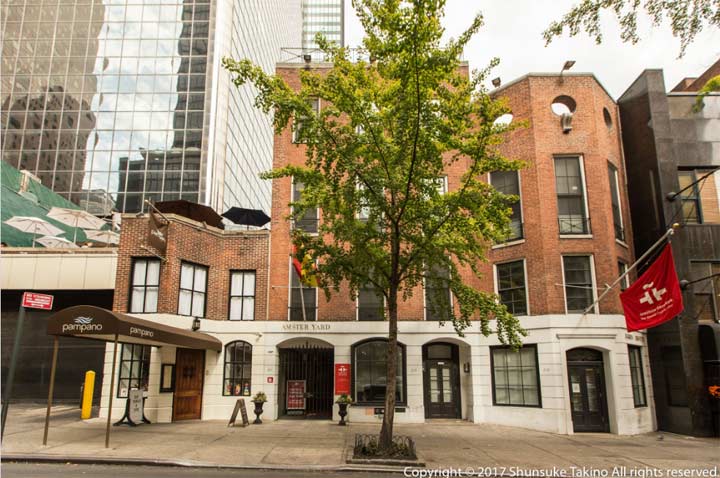 It might look like a gated building front on East 49th Street between 2nd and 3rd Avenues, but this between-buildings passageway, now known as Amster Yard, goes all the way back to 1830 or earlier. On this site, the stagecoach to Boston began its route on a now-vanished road called the Eastern Post Road. Later in the century, tenements were built, and an alley between them was gradually covered with refuse until James Amster Associates, a design firm, took it over and remodeled it in the mid 1940s. Amster himself lived on the property until his death in the 1980s.

In 2002, Spanish Cultural Center Instituto Cervantes acquired the property and immediately discovered that it had become unfit for habitation. They razed the building and rebuilt it from scratch, but also rebuilt Amster Yard along in its old spot and added an art gallery and a charming back garden. The complex remains open to the public on weekdays except when there is a private event. 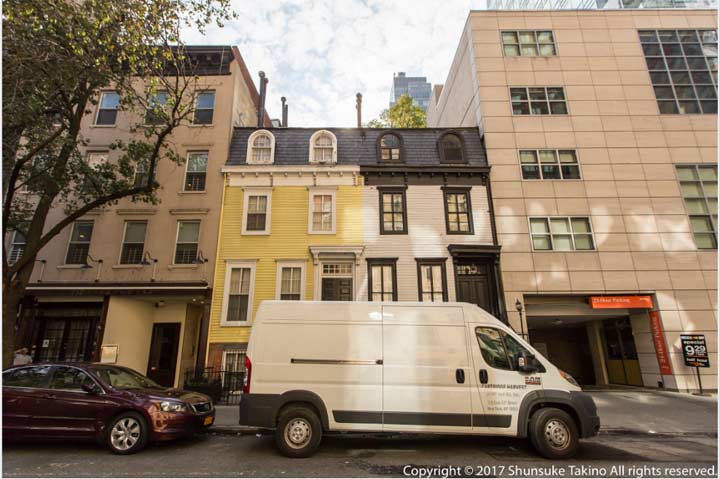 A pair of French Second Empire clapboard houses built by Robert and James Cunningham in 1866 have somehow survived at 312 and 314 East 53rd just east of Second Avenue on a block otherwise dominated by brownstone buildings, which came along about 20 years later. In 1866 they were nestled at the city’s northern extent and likely were surrounded by fields and forests. [Meyer Berger’s NY] 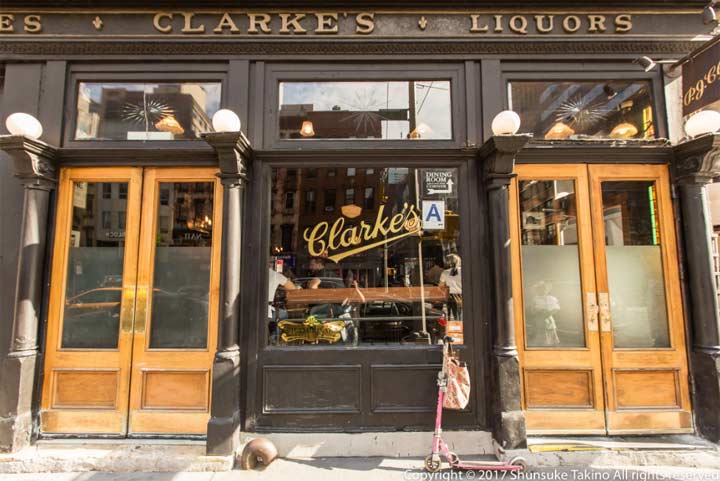 PJ Clarke’s, at 1st Avenue and 55th Street, was established by Ehret’s Brewery in 1890, with Patrick Joseph Clarke taking over in 1904, continuing until his death after World War II. The place still holds on to old-time trappings such as vintage porcelain urinals, mahogany woodwork, tin ceiling, and portraits of FDR, JFK and Abraham Lincoln. Customers jot down their orders on notepads provided by staff– a Clarke’s tradition. Frank Sinatra, Jackie Onassis, and Nat King Cole were all regular patrons, and Buddy Holly proposed to his wife, Maria Elena, at Clarke’s on their first date in 1958. Dick Clark always made his way here after finishing his New Year’s Rockin’ Eve ABC broadcasts. And, Ray Milland staggered up 3rd Avenue in an alcoholic daze after cadging a freebie at Clarke’s, which was called Nat’s Bar in The Lost Weekend.

There are 7 other branches of P.J. Clarke’s in Manhattan, Chicago, Washington, Las Vegas, and São Paulo, Brazil, but this is the original.