FNY hadn’t toured Roosevelt Island since way back in November 2005. That was a 5 hour extravaganza covering the entire island, and since your webmaster was 11 years older, decided to shorten things and concentrate on the island south of the Queensboro Bridge on a perfect weather day on September 24, 2016. 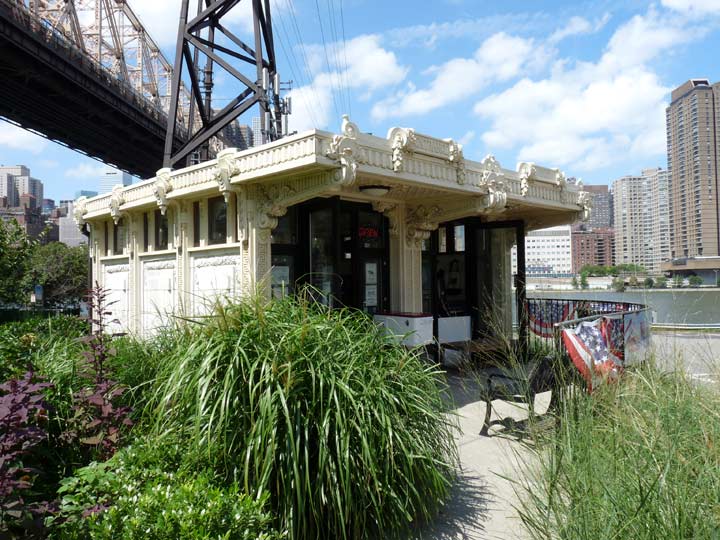 This was one of what was originally five exquisite entrance and exit kiosks, rendered in beautiful Beaux Arts terra cotta, that used to stand at 2nd Avenue and East 60th Street where trolleys from Queens let out, or accepted passengers from an underground station. It’s had two other homes since then.

One of the kiosks, now the Roosevelt Island Visitor Center, is dwarfed by the Queensboro/59th Street/Ed Koch Bridge, as well as one of the huge stanchions that carry the tramway wires.

At the intercession of the Roosevelt Island Historical Society’s Judy Berdy, who worked with the kiosk’s former location at the Brooklyn Children’s Museum in Bedford-Stuyvesant and several other agencies, in 2006 the kiosk was transported here to the very spot where the trolley elevator landing was once located, where it now serves as the Roosevelt Island Historical Society‘s visitor center. 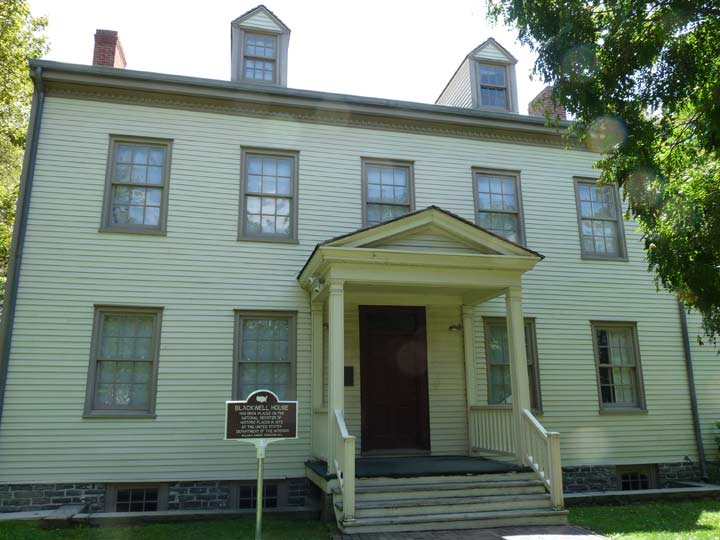 Roosevelt Island’s first permanent resident was Captain John Manning, a disgraced British naval officer who had allowed Fort Amsterdam (on Governor’s Island) to fall to the Dutch in 1673. Upon Manning’s death the island was passed on to his stepdaughter Mary and her husband, Robert Blackwell, and the island stayed in the Blackwell family till 1823, retaining the name “Blackwell’s Island” for decades after that.

The oldest building on Roosevelt Island is the Blackwell Farmhouse which dates to 1794. In 1828, the farmhouse was purchased by the city, and it later became the administrative center for the succession of institutions that sprung up on Blackwell’s Island beginning that year. The Blackwell family also maintained residences in Ravenswood, Queens. 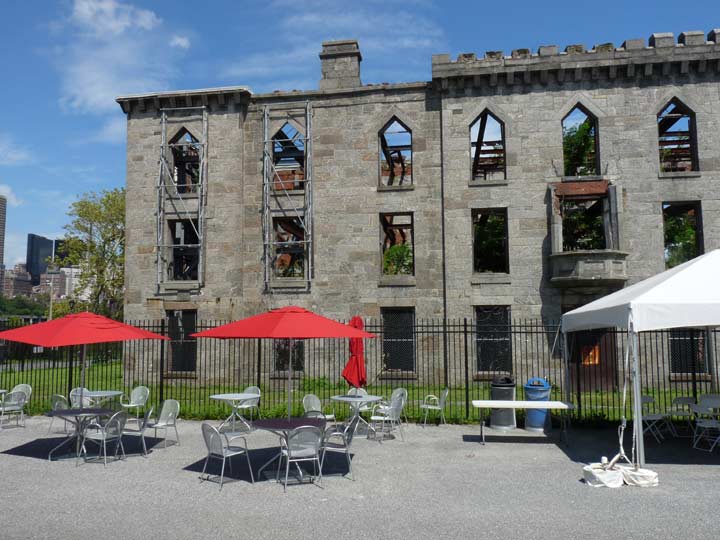 Ruins of the Smallpox Hospital, built in 1856 by James Renwick Jr., the architect of St. Patrick’s Cathedral, have recently been made more accessible to public view, though the ruin remains fenced off. Visitors can view it from the outside, but the interior has yet to be made safe for the public. Unusually, it is well-lit at night and its ghostly outline can be readily seen from Manhattan Island after dark. The picnic tables and food trucks tend to detract from the ambience.

In the 1850s smallpox was a dangerously transmittable illness and its sufferers were quarantined here. In the late 1800s North Brother Island became NYC’s quarantine center, and the hospital became a nurses’ residence. It has been gradually deteriorating here since the 1950s. 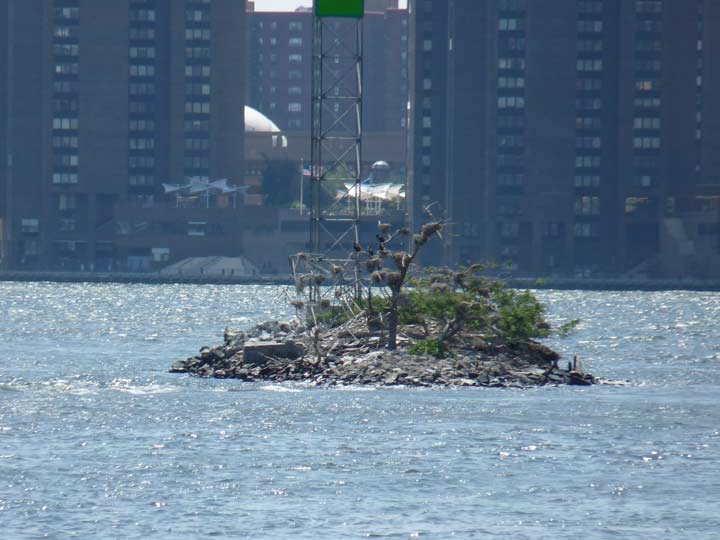 Viewable from the south end of the new Southpoint Park (open every day except Tuesday) is U Thant Island, named for the Burmese secretary-general of the United Nations between 1961 and 1971.

The island was built by subway pioneer August Belmont, who was completing the Steinway Tunnels under the East River. Piano manufacturer William Steinway had begun the tunnels in 1890, hoping to extend trolley service between Manhattan and Queens. Steinway died before the project could be finished, but Belmont stepped in. Belmont Island (as it was then called) was made up of landfill from the excavated tunnel.

For the next 70 years, Belmont Island was all but forgotten, but in 1976, United Nations employees who were followers of spiritual leader Sri Chinmoy rediscovered the forlorn island and redecorated it by planting trees and flowers. The island was renamed for U Thant, a good friend of Chinmoy. 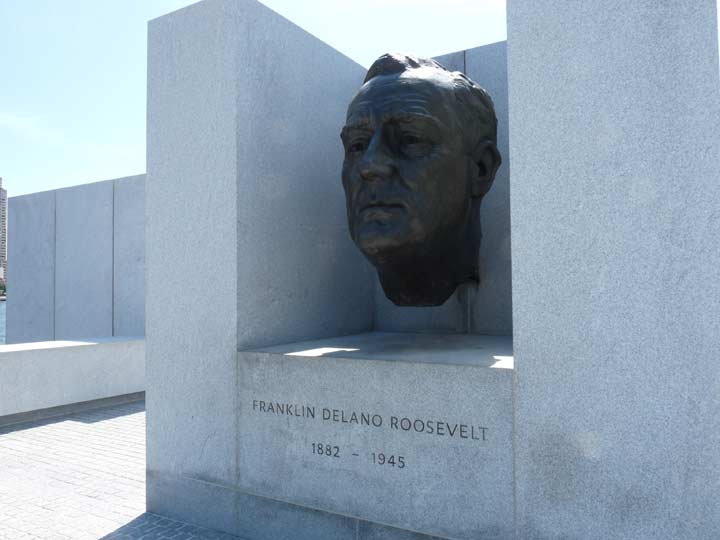 The Franklin D. Roosevelt Four Freedoms Park is a four-acre (1.6 ha) memorial to Franklin D. Roosevelt that celebrates the Four Freedoms he articulated in his 1941 State of the Union address. It is located adjacent to the historic Smallpox Hospital in New York Cityat the southernmost point of Roosevelt Island, in the East River between Manhattan Island and Queens. It was designed by the architect Louis Kahn, one of his final works.

The focal point of the Park is a 1,050-pound bronze bust of President Roosevelt, an enlargement of a sculpture originally created in 1933 by Jo Davidson, one of the most prominent American sculptors of the 20th century. Davidson sculpted a life-size clay, working with FDR in the Oval Office at the White House. [wikipedia]

Some enterprising person should photograph the bust when the sun shines on it. This would, of course, require observing the bust at various times and seasons. Unfortunate that Forgotten NY is not remembered a bit better.