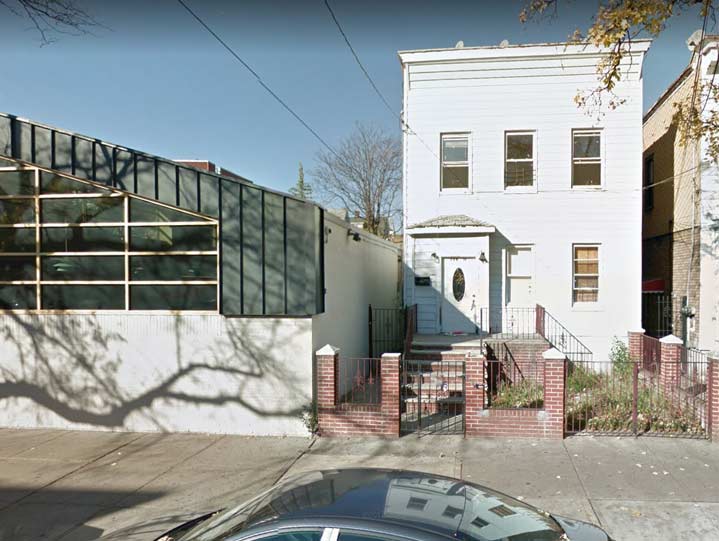 104-11 39th Avenue in Corona is one of a pair of Italianate-style houses just east of the Queens Library Corona branch building located on 39th Avenue a block north of the #7 train on Roosevelt Avenue. The house probably goes back over a century to when the Italianate style was popular, and its former details have long been stripped away in favor of aluminum siding.

One of its former residents quite likely has a few of the books he authored available in the library: children’s books author Crockett Johnson (1906-1975). He is best remembered for Harold and the Purple Crayon, in which a kid’s drawings become real. Born David Johnson Leisk, Johnson edited books at McGraw-Hill beginning in the 1930s and later joined the Communist Party, editing its journal New Masses. He later drew comic strips with a leftward editorial tilt in PM before turning to writing children’s books; Crayon kicked off a multi-book series in 1955. Johnson lived in this house as a teenager and young adult.

The Queens Library purchased the building in 2013 and rented apartments in the building since then, but now are moving to tear down the building to expand its relatively small footprint.

I guess that after the building is torn down, it will have to exist only in purple crayon.

From CPUSA member to magazine editor/editorial cartoonist to author of children’s books. This is how public education became public indoctrination. No wonder “snowflakes” require “trigger warnings”, & counseling at the slightest hint of deviation from political correctness.

Actually, your response to an interesting article about a historic house in Queens has a distinct snowflake quality. I don’t think anyone is in danger from the cartoons, the article or the house.

Don’t bother arguing. He’s a psycho who’s off his meds, and needs more protection than the “snowflakes” he’s always complaining about. Wonder if his fleeing to Arizona might have something to do with crimes he’s wanted for in NY.

Nice to see Johnson’s childhood home here. He lived in this house from around age 6 until early adulthood (circa 19-20 years old).

A brief correction, if I may? Barnaby (1942-1952), Johnson’s comic strip with “a leftward editorial tilt,” ran in the newspaper PM and in syndication. Collier’s ran his “The Little Man with the Eyes” (1940-1943), a mostly wordless and apolitical strip.