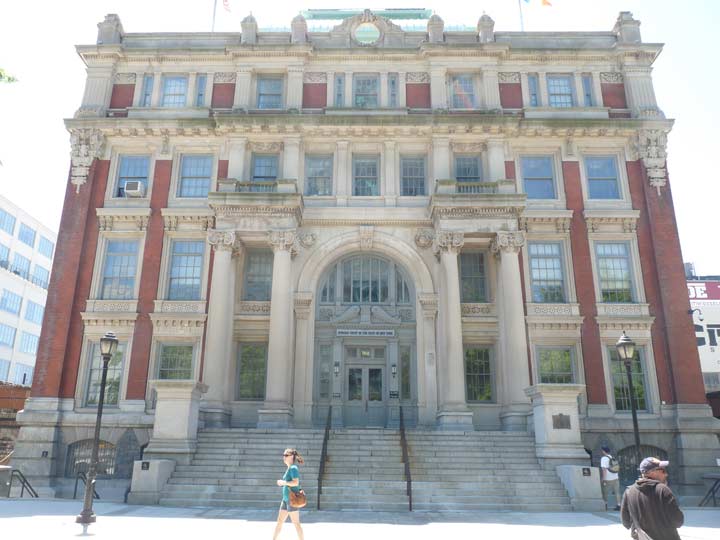 Though innumerable glass towers are now going up in Queens Plaza and Hunters Point, one of the most notable buildings in western Queens turns 110 years old this year.

The former Queens County Court House (now home to the Queens Supreme Court) has been in this location since 1870, and sparked a political dispute that led to the creation of Nassau County.

Long Island counties, beginning in the late 1600s, were Kings, Queens, and Suffolk. Six towns in Kings consolidated in the late 1800s to create the City of Brooklyn, which was annexed (residents voted to consolidate it) to Greater NYC in 1898. Queens’ history is a bit more complicated. Queens originally comprised western Queens (the towns of Newtown, Flushing, Jamaica and in 1870, Long Island City) and what is now Nassau (Hempstead and Oyster Bay; North Hempstead was created in 1784). The eastern towns began agitating for “independence” from Queens County beginning in the 1830s, when a dilapidated courthouse in the Mineola area was to be replaced. Factions from the western and eastern parts of Queens vied for the new courthouse, which was ultimately built in Long Island City at the present Court Square in 1870. Differences, political and cultural, between the east and west ends of the vast county were accentuated during the debate. In the 1890s, proposals for Greater New York did not include Queens’ eastern towns.

The first courthouse in this location burned down in 1904, and was replaced with the current Beaux Arts limestone structure in 1908 by architect Peter Coco. The famed 1925 murder trial of Ruth Synder (the smuggled photo of Snyder in the electric chair was a Daily News sensation in 1925) and the robbery trial of Willie Sutton, who robbed banks because ‘that’s where the money is’ were held here.

In 1910, Coco and 13 others were tried for corruption and grand larceny in the very building Coco had designed. He wound up going to prison for 2 years.

If you know who could provide information about why the Rockaway peninsula was severed from the Town of Hempstead and included in the Boro of Queens, please let me know. Did officials in Hempstead try to stop that from happening? In about 1917 a bill was defeated in Albany that would have made the Rockaway peninsula a separate city. It is clear the people in Rockaway were not pleased to have been included in New York City without even having an opportunity to vote on the matter like those in western Queens.

The Long Island City courthouse is actually quite beautiful inside. The courtroom on the top floor is amazing, with a stained glass skylight.

The dome ceiling in the center of the building was a stained glass dome until the Weather Underground blew it off the building.

Rockaway residents voted to split away from Hempstead be consolidated into NYC even before Flushing did.

One reason was that they were connected to the western Queens towns of Jamaica, Newtown and LIC and the Queens government by the LIRR so they did not experience the isolation that the two other eastern towns and the rest of Hempstead did.

Another interesting note is that Rockaway, with no farming income, ran up all kinds of debt for improvements and schools prior to consolidation knowing that the City of New York would absorb it.