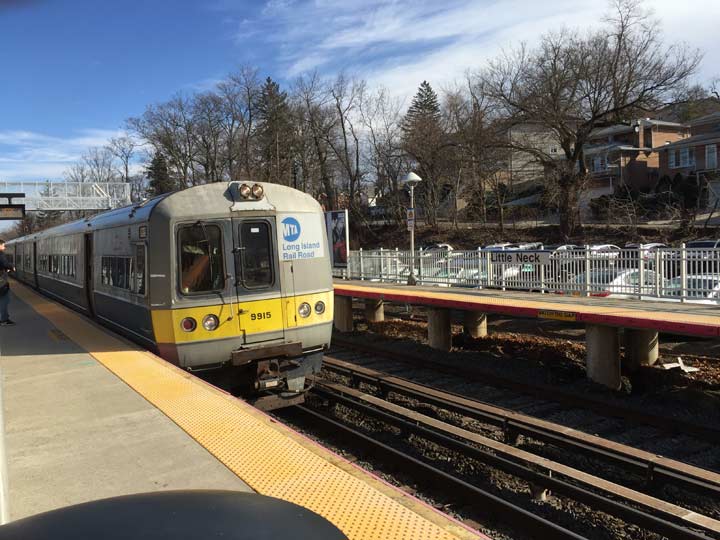 When I began riding the Long Island Rail Road on a daily basis in 1992 for a job in Port Washington, the M3 car you see here, first built in 1985, and its older counterpart, the M1 (which went “online” from 1968-1971, with the M standing for Metropolitan) were still the only cars used on the line. Beginning in 2002, newer M7 cars began to replace them on both the LIRR and the Metro-North, serving NYC’s northern suburbs. There are still a good number of M3 cars in service, even though the M1 was discontinued in 2007. The M1s and M3s where built by the Budd Company which has since gone out of business. 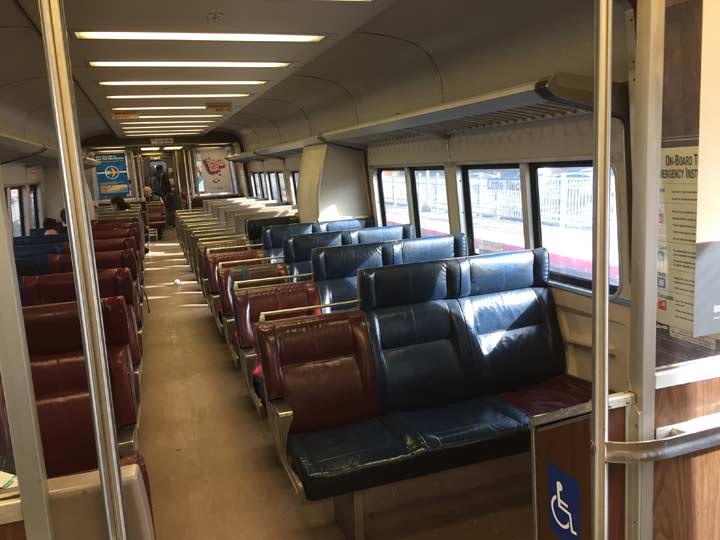 The M1 and M3 series looked virtually alike, and on the outside at least, remind me of the R-42, R-44, R-46 and R-68 subway cars. The interiors have wallpaper with the NYS insignia and faux wood paneling as does the R-46. The similarity mostly ends there, as commuter trains feature padded red and blue seating and window-facing seats (forward or backward) with a 3-2 seating scheme bisected by an aisle.

Every other car in an M3 trainset has a working restroom, but they are mostly a nasty business and many of my friends refuse to sit in a car with a restroom if they can help it because of the strong disinfectant the maintenance crew uses. Running water was discontinued years ago and the sinks removed.

Despite that, I still enjoy riding an M3 set when I happen upon one. The cars are somewhat roomier and there is more seating; room had to be made in M7 cars for handicapped riders and so M7 cars have fewer seats per car. I do not sit in the center seat of  3-seat unit, and if an 8-car trainset is used during rush hours, as is increasingly the case, I prefer to stand in the aisle instead of clustering in the doorwell. The M3s can still get up a good head of steam on straightaway sections of track between stations.

The M3’s days are numbered. The MTA as ordered hundreds of new M9 cars that will be phased in beginning in 2018. Not only is replacing the 30+ year old M3 a priority, but the MTA expects more capacity in the 2020s as the neverending East Side Access project, bringing the LIRR into Grand Central Terminal, becomes a reality. Metro-North trains can also be brought into Penn Station if capacity ever permits.

Budd existed until 2007 when Martinrea bought most of their assets and absorbed them into their own company. The Budd name may not be active but the stuff they produced lives on via Martinrea especially the stuff produced in the USA.

Drive a car? Odds are good you have parts in it that Budd made via itself or via Martinrea.

Does anyone know more about the construction of the seats in the M3? I am especially interested in how much the seated part weighs. Thank you

There was one obvious visual difference between the M1 and M3 – the air intakes that each occupied one seat space in the middle. The intakes are plainly visible in the photo. On the outside, a screen covered the area that would have been window glass. The reason for the air intake was to provide ventilation for the car’s electric motors without placing the intake at track level, as was the case on the M1 cars. The M1 intakes frequently got clogged with leaves, snow, and debris, which could cause motors to overheat, even in the winter.

Another obviously visual difference – the side engineer’s window on the M1 opens down into the cab where as on the M3, the window slides to the back along vertical channels on the outside.

Have find memories of walking over to MSG to catch the 7:15. Grab 2 beers from the vendor on the platform head to the smoking car (the bar car was always packed) and read the Post.
Great way to spend the 30 to 45 minutes to get to the Hollis Station from here I’d walk the mile to home. (Wouldn’t want to make that walk today).

Will miss the M3. If you sit at the ends of a M7, all you hear are bumping and grinding. Very annoying.

Ahh nothing like a smooth quiet ride on a m3….. the 7s have so many damn squeaks and clunks. Gunna miss these when they actually go.

Maybe it’s because I’m used to the M7, but I hate the M3’s nowadays. They’re always dusty and dirty, and the power tends to constantly stop every 10 minutes. Not to mention the constant rickety swaying you feel as it speeds up. I’m glad they’re scrapping them.

SHUT YOUR TRAP according to NationStates the C3s are more comfortable than the M3s and i don’t care thet youare glad that there SCRAPPING ” THATS RAILWAY HELL. ”
– Naton from NationStates. A game simulator to chat Nations.