I had to make two trips to the Apple Store on 9th and West 14th to get an IPhone 6 unlocked, and then I had a new battery installed, since Apple was running a sale on them. As stated on earlier items, I would normally have gotten this done on Tekserve on West 23rd near 6th, but that was rent-increased into oblivion. However, the 9th Avenue Apple store is not tremendously out of the way, only one block from the 23rd St station (C, E).

This is a part of town where street grids clash. The West Village street grid has its northern end at Gansevoort Street (named for brigadier general Peter Gansevoort, who had served in the revolutionary War). North of that, there’s Little West 12th (so named because West 12th turns to the southwest at Greenwich Avenue; Little West 12th takes its place here), West 13th, and so forth. As the grids clash, there are interesting triangle plots formed that provide interesting perspectives. We are also on the cusp of two Landmarked districts, Greenwich Village and Gansevoort Market (which is what the Landmarks Preservation Commission calls the Meatpacking District.

By now, you know the familiar story. For decades, meat wholesalers ruled the overnights — walking through you could find huge hunks of beef, veal, pork swinging on hooks under the rusting metal sidewalk eaves. Prostitutes (some of which serviced the meatpackers) and after hours clubs also dominated the nighttime scene. By day, it was dead as a doorknob; sometimes I would wander over there in the hours before starting my night job at Photo-Lettering. I was fascinated by the belgian-blocked streets, and the vast hulk of the West Side Freight Elevated, and the last thing on my mind was that someday it would become an elevated park surrounded by high-rise apartments and high-end fashion emporia, which it has now evolved into. The Apple store itself was once a huge Western Beef outlet. 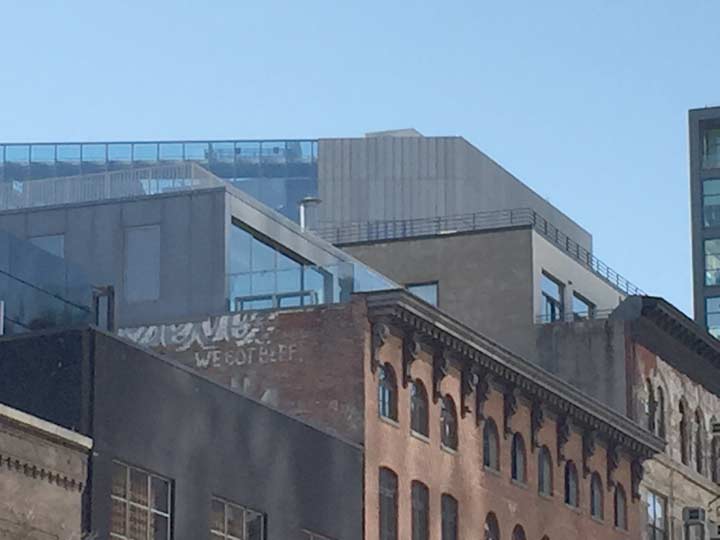 West 14th, west of 9th, was one lined on both sides by meat wholesalers. Most trace of them is now gone as the buildings have remained, but have gone residential, with boutiques on the ground floor. Some have kept their old metal awnings, or had new ones installed that resemble the old ones. I spotted this “We Got Beef” painted ad on one of the buildings from 9th and 14th. 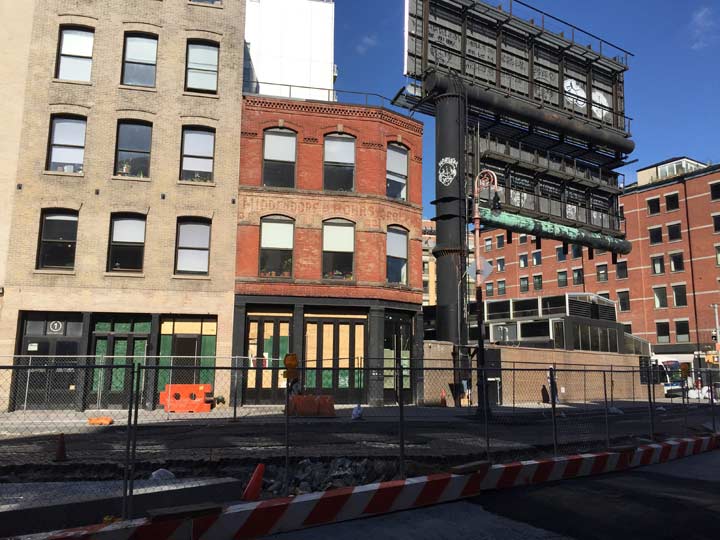 Despite the rigors of over a century’s worth of wind, rain and storms, the painted sign identifying Middendorf & Rohrs Grocers is still identifiable at #1 Little West 12th Street. The building has an oddly slanted shape as it fronts on both Gansevoort and Little West 12th, which intersect here. More on this FNY page from 2013.

The vast plaza formed by 9th Avenue, Greenwich Street, Little West 12th and Gansevoort is being worked on by the Department of Transportation which is doing some traffic-calming construction as the region gets ever busier. 9th Avenue has been torn up for years, with no end in sight. 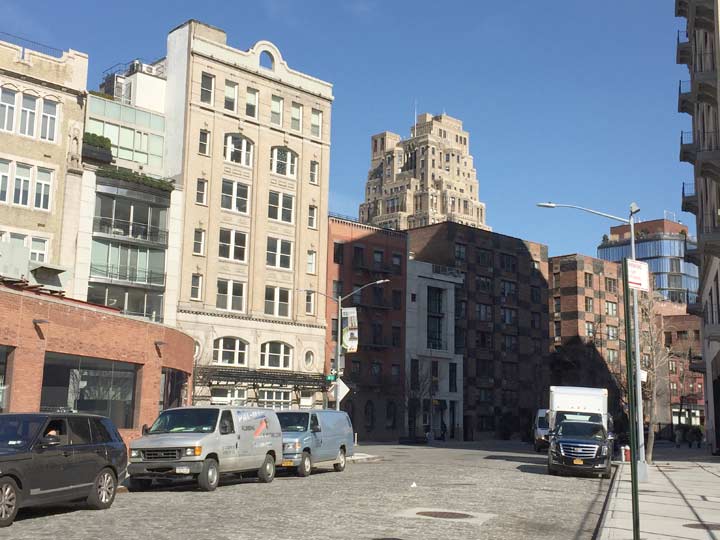 I had never before walked on Gansevoort all the way to its end at West 13th Street. The belgian-blocked paving has been retained. The beetling Art Deco hulk of 111 8th Avenue, originally the Union Inland Terminal Building, looms over the intersection. When built in 1932 it was the city’s largest office building with 2.9 million square feet of space. It was once integral in NYC’s shipping business, the nexus of the trucking and railroad lines that brought products to and from the Hudson river port terminals. In 1947, it became the Port of New York Authority building; that agency moved to the first World Trade Center in 1970. Since 2010, Google’s NYC operations have been centered here, and Google recently purchased the Chelsea Market shopping/restaurant center across 9th Avenue.

This building has its very own subway mosaic. 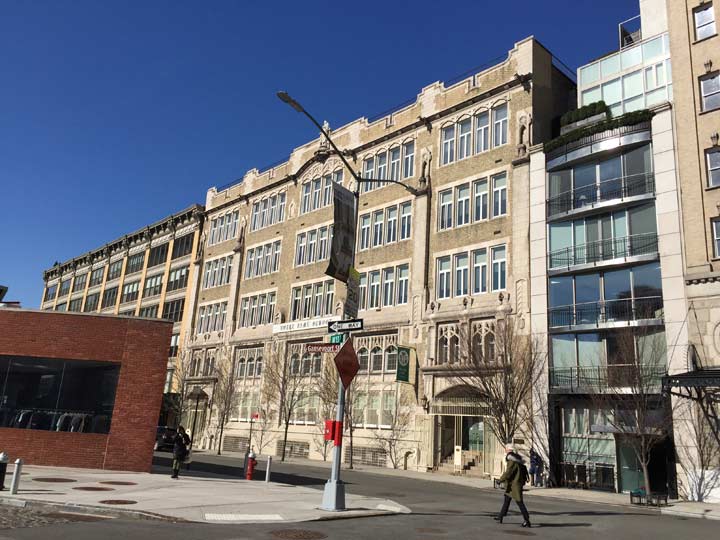 The Notre Dame Academy, a Catholic high school for girls, was founded by the Sisters of St. Ursula of France when the arrived in the USA in 1912; the original school was uptown on West 142nd street. The school, affectionately called “chez nous” or “our house” moved to this building at 327 West 13th Street in 2002 into what resembles a C.B.J. Snyder public school building (someone help me out with this in Comments). 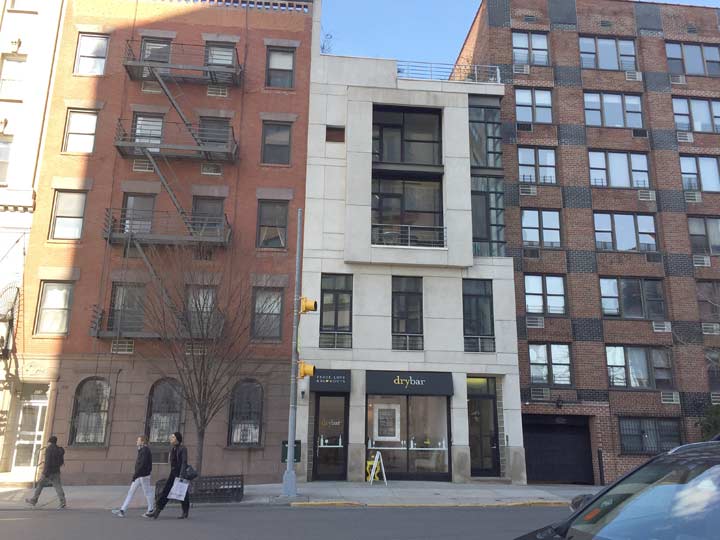 317 West 13th lies just north of the Greenwich Village landmarked district, and so, it was given this remake a few years ago. The ground floor is home to a hair salon called drybar. 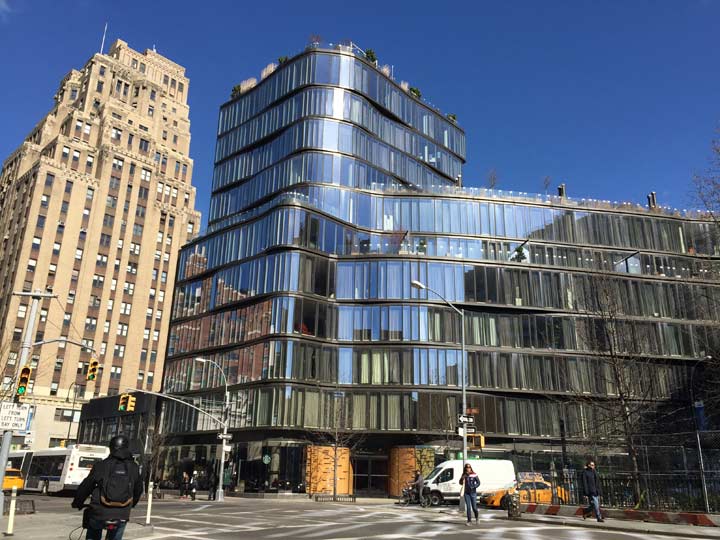 There was  a trend in the first decade of the 21st Century toward undulation, or wavy exteriors, on glassy buildings. One Jackson Square (122 Greenwich Avenue) was in the middle of the trend. I remember when I gave an FNY presentation at the Apple store on Greene Street a decade ago, I was challenged by an audience member who said “don’t you like anything new?” I responded. sure, as long as it’s good, and to be honest, I don’t mind this building all that much. The vertical banded windows and wavy exterior set it apart from the usual glass box fare. 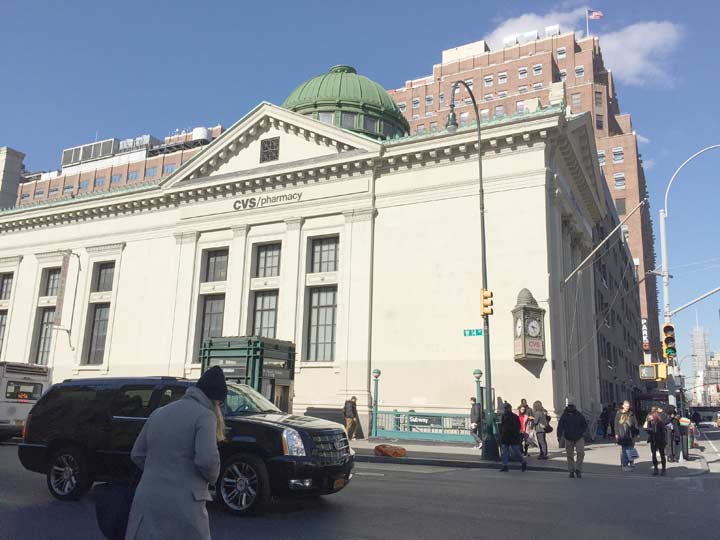 This beautiful copper domed, Corinthian-columned building on the NW corner of 8th Avenue and West 14th Street is the former New York Bank For Savings, constructed in 1897 by architect Robert Henderson Robertson. It passed through incarnations as Goldome Bank, Central Carpet, and most recently, Balducci’s, which closed its NYC locations in April 2009; a CVS Pharmacy occupies it these days. The Classic Revival bank resembles its contemporary, the Bowery Savings Bank in Chinatown.

Much more on 14th Street on this FNY page.

I graduated Notre Dame in 1974. We were located in double (side by side) brownstone buildings on W. 79th St. There was a bridge outside the auditorium door which connected the school to the convent on the next block behind the school. I believe the convent was also a double building. Each class, Freshman, Sophomore, Junior and Senior had @ 50 students each. It was a very small school. We were located near the Museum of Natural History up the block and across the park.
The left side brownstone’s staircase was called the “Senior Staircase.” There was an elevator for disabled students and older nuns.
Our yearbook was called “Chez Nous.”
It was an interesting experience and these days it could be considered “quaint.” I did receive an excellent education as it was a college preparatory school.
This is my first comment on FNY. I am a daily reader!

I believe the school on 13th St west of 8th Ave was the Food Trades High School.

Kevin, any comment on that lamppost next to the former New York Bank for Savings on the corner of 14th street and 8th ave? I don’t recall ever seeing one like it.

From 1966-67 I worked as a page at the library called Jackson Square. It was an old dutch styled row house
built as a NYC Public Library a long time ago. In 1968? the library branch moved to Jefferson Market Courthouse. I missed the quaint old row house.