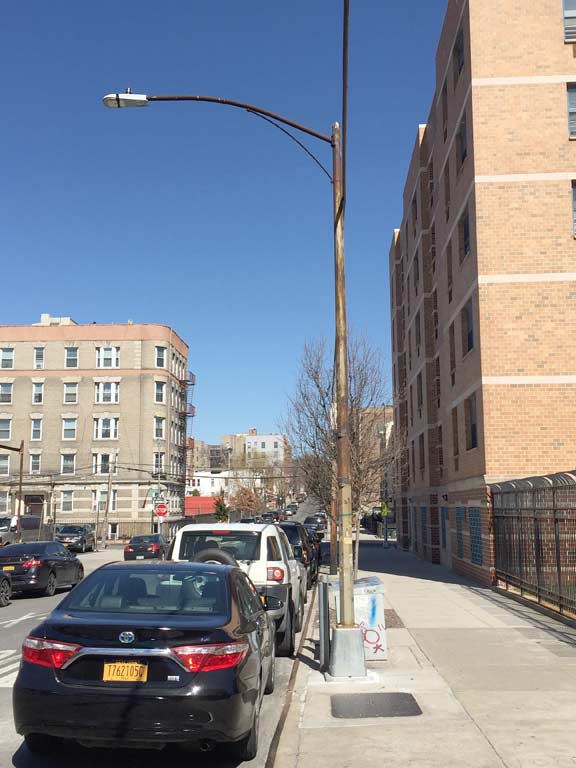 The other Sunday I walked a good 6 miles on East Tremont Avenue between the Grand Concourse and the Bruckner Expressway (where there is a bus back to Flushing) and I spotted this item on Honeywell Avenue just north of the avenue in the neighborhood named for it.

This is an example of a lamppost from the dawn of the modern NYC lamppost era, about 1950,  when aluminum, 8-sided poles began to appear on the streetscape. In the very early days, such posts had curved masts supported by a thin bracket. The then-Department of Traffic redesigned them in a few years with a heavier mast that didn’t need a bracket, and that model, along with the curved cobra neck, is most often seen in NYC streets these days.

However, a handful of “curved masts” as I call them, are or were still to be seen when I began to produce this website in 1999. There are fewer these days, but you can still see them around, as here, and sometimes under elevated trains, where all manner of anomalies are preserved.

This one is  a strange case, though. If you check the Google Street View shot from October 2017, this pole isn’t there; instead, it’s a recent regulation straight mast. I guessed what must have happened. A truck must have hit that pole and toppled it — or it was found somehow defective. The the DOT hastily replaced it with whatever was in the yard, and in this case, it was this rusty specimen from 1950, once again pressed into service.

Anyway, that’s my guess, but if you have a different idea, comment as you see fit.

The foundation or base looks new. The DOT should at least give it a paint job.

What makes this installation most unusual is that this pole has not been painted with insulating paint. After Jody Lane was electrocuted, the City had all existing metal poles painted with an insulating paint to a height of seven feet above the base. This was to minimise the chances of shock or electrocution should a defect in the power supply cause the pole to become energised. All new or replaced poles require this treatment.This is a breach of the contract by whichever company erected this pole.

The New York City poles are made by the steel and aluminum company called HAPCO. At least, the ones beginning in 1950. The Deskeys aren’t, but poles like what they use now and the cobra neck and davit styles and under braced curved upsweep (what this post is) and curved trusses are all made by HAPCO.

What I find interesting is that they replaced the base of the pole and reinstalled the 1950’s style pole. Too bad that piece of crap LED doesn’t work. That’s what the black electric tape wrapped around the cobra head means. SMH.