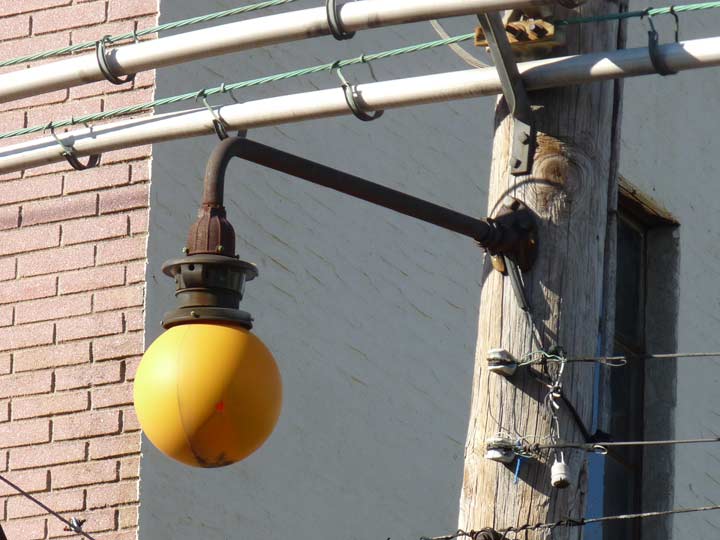 I have to admit, this one fooled me just a little. Several years ago I was wandering on Mundy Lane, the road separating the Bronx’s Eastchester neighborhood from Mount Vernon, the city just over the NYC line, and I thought I had discovered the last remaining globe-shaped fire alarm indicator light in the 5 boroughs. It turns out that I had probably discovered the last one in Mount Vernon, on Sandford Boulevard (which becomes Pitman Avenue once within New York City) and South 11th Avenue.

In the 1940s and 50s, most NYC fire alarms were marked lamps diffused by by globe-shaped, plastic covers like this. Gradually, cylindrical ones began to take over, till they became the dominant from from the 1960s through 2000s. After that, orange plastic covers were phased out nd small red fire alarm indicators were mounted on streetlamps.

When I moved to Flushing in 1993 I was amazed to see one final globe-shaped fire alarm indicator mounted on an octagonal post at 45th Avenue and 158th Street. Foolishly I never got a photo and it disappeared a couple of years later.

Maybe the nyc municipal archives photo gallery would have

Question #1 Does that light function ?

Question #2 In this day and age of cell phones, does Mt. Vernon still use fire alarm boxes ?

Maybe some people don’t have cell phones, like the elderly or very poor

I love this site. You make me want to learn more about my city. I love Mount Vernon!

Are you guys aware that the East Third Street Station of the New York, Westchester and Boston Railway was recently torn down? That is a Mount Vernon story!