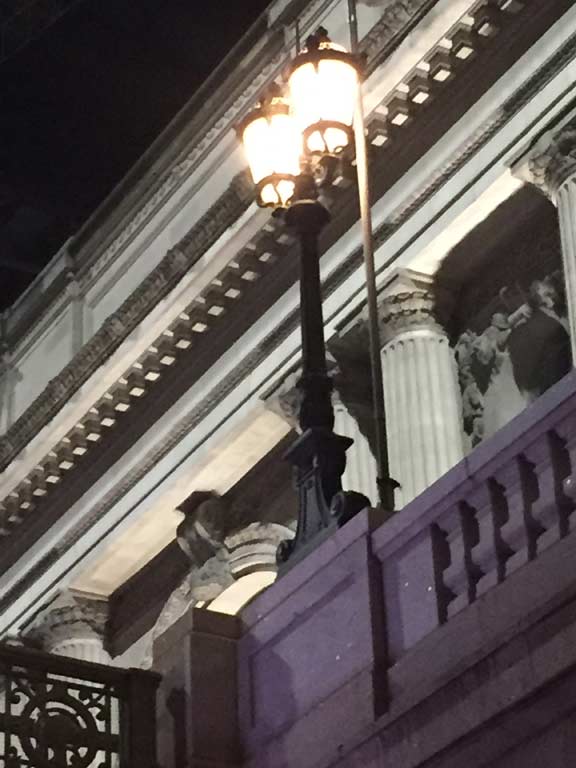 I’m a little unclear on whether the ramp that takes Park Avenue traffic up over East 42nd Street and around Grand Central Terminal was built. GCT itself goes back to 1913 and it was in fact the second such railroad terminal building on this site. It was faced with demolition like its sister, Penn Station was, but an intercession by preservationists which included the cachet of First Lady Jacqueline Kennedy Onassis helped save the old barn, which underwent a tip to toe renovation for several years in the 1990s. A plaque on the fence underneath the lamppost on the right dates the ramp to 1919.

The ramp’s original lamps, complete with incandescent bulbs, are still in place; they were renovated along with the rest of the terminal in the 1990s and repainted. Some, though, still have their reddish primary coats of paint.

There was another set of lamps that lit the ramps surrounding the terminal, in this case, sets of twins. About three decades ago they disappeared, only to be replaced with simple pipes with luminaires attached to them. Most of those replacements are still there. However, the city has restored two of the Twins and restored them to the top of the viaduct over 42nd Street where it splits into two roadways.

However, for the centennial celebration of Grand Central Terminal in 2013,  GCT turned to Historic Arts & Casting in West Jordan, Utah, which magnificently restored two of the bronze posts to a pristine appearance, and they were subsequently reinstalled. Will other reproductions appear?