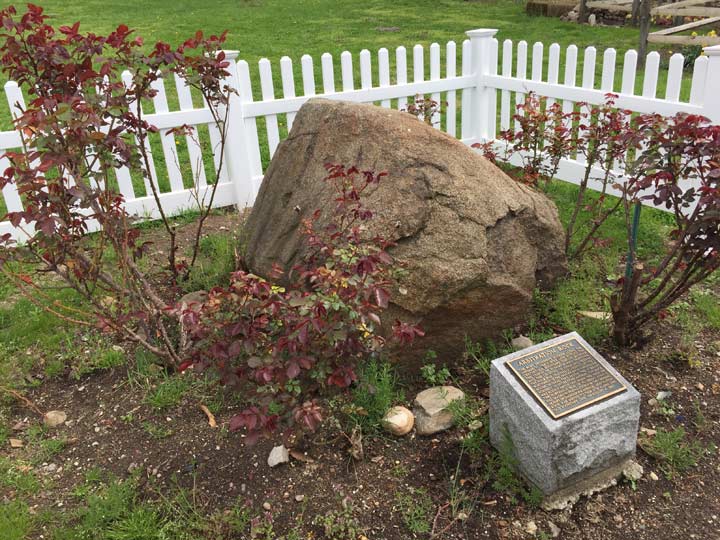 The Van der Ende-Onderdonk House. Flushing and Onderdonk Avenues just past the undefended Brooklyn-Queens border,  was once a working farm, and now has a big back yard. In the middle of the yard, you’ll find a big, unevenly shaped boulder, with a picket fence surrounding it.

Natural elements, like trees, rivers and mountains, were and are still used to delineate political boundaries. In the case of Kings and Queens Counties, rocks and boulders left by the passing of a glacier 100 centuries in the past were used–and astoundingly, three such boulders are still in existence. In the back yard of the Onderdonk House is a large rock surrounded by a picket fence. It is the official position of the Greater Ridgewood Historical Society that this is the historic “Arbitration Rock” used to delineate the border, along the Brooklyn-Newtown Turnpike, of the borders of the towns of Bushwick and Newtown, or today’s Brooklyn-Queens line. In 1769 a large stone was used by surveyor Peter Marschalk to designate the boundary, which had been in dispute. The story goes that the rock had been left underground when Onderdonk Avenue was extended in 1930, and when the avenue was re-graded in 2000 the rock was exposed. It was moved to the backyard of the Onderdonk House the following year. The GRHS has yet to provide documentation in proof.

For centuries the Brooklyn-Queens county border ran on a diagonal straight line cutting through Bushwick and Ridgewood. In 1925, after both neighborhoods were well built up and the line was cutting across properties, it was redrawn to zig and zag along a number of streets; the border today runs mainly along Cypress and Wyckoff Avenues.

There are two other rocks in the vicinity that may have figured in the Queens-Brooklyn borderline. One is at Varick Avenue and Randolph Street, and Bob Singleton, executive director of the Greater Astoria Historical Society, claims that that is the true Arbitration Rock. I proprose a duel to decide the question. Pistols at dawn, gentlemen!

A third could be seen a half mile southwest at Morgan Avenue and Rock Street (since removed). Rock Street may or may not have been named for this rock, or Arbitration Rock.

Hi. I would like to add a bit of history to Arbitration Rock. when i was Deputy Commissioner for DEP’s Bureau of Water and Sewer Operations, Mike Sinansky, then Claire Shulman’s Borough Engineer approached me about excavating Arbitration Rock. he had a photograph of the rock before it was buried during street regrading, as well as a rudimentary map showing its location. A BWSO crew excavated the rock and transported it to the Onderdonck House property.
The tip of the rock was exposed in th eexcavarion for a day or so and during that time, it split from the rest of the rock which was still covered with soil.
Readers interested in the Rock’s history may want to check out the infamous Lord Cornbury, who stated that if the two communities could not resolve their
boundary issue, he would assume ownership of both communities to settle the matter