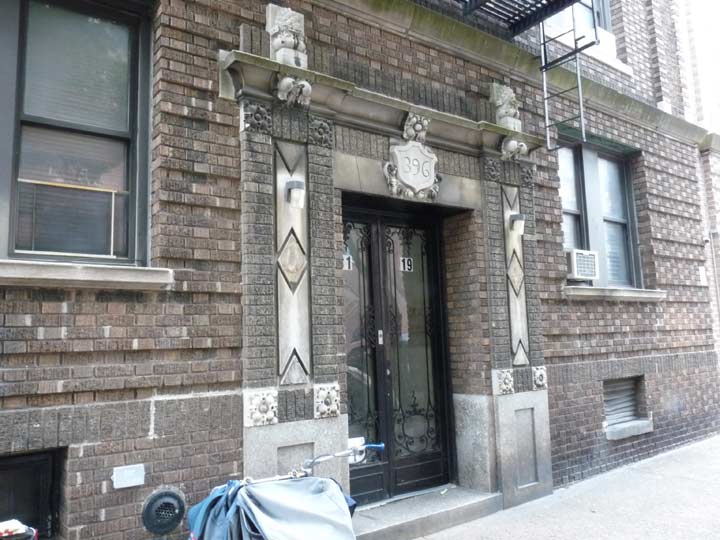 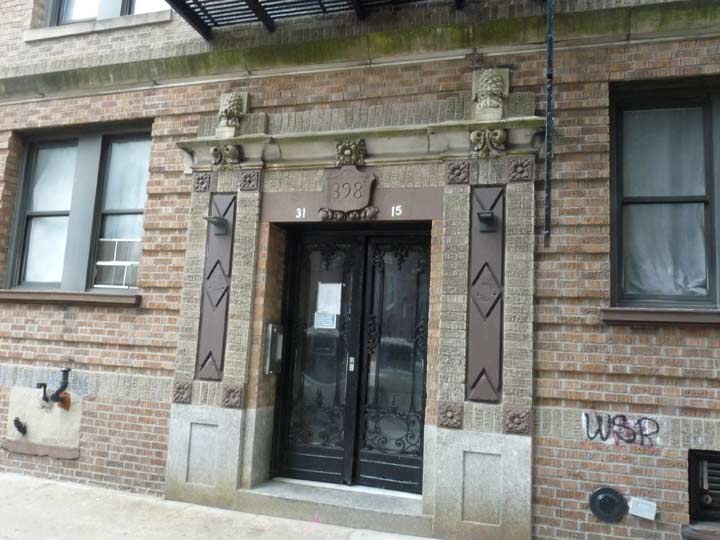 I was reminded of Astoria’s past when making my way up 32nd Street during the week. A pair of apartment buildings at 31-15 and 31-19, between 3rd Avenue and Broadway, bear different house numbers: #396 and 398. While a good number of apartment buildings and dwellings in Astoria and Long Island City were built before the mid 1920s, most have the Queens house numbering system originated by the borough Topographic Bureau in 1915 and gradually instituted over the next 15 years: hyphenated addresses that begin with the next closest avenue in front of the hyphen, and house numbers that go up until the next avenue is encountered (most Queens streets were given a new numbering system as part of the project).

Some, though, have kept the old numbering mainly because it would be a pain to remove the numbers, especially if they are carven or bas-reliefed, and the new numbering appears side by side the old, as in the pair seen above. 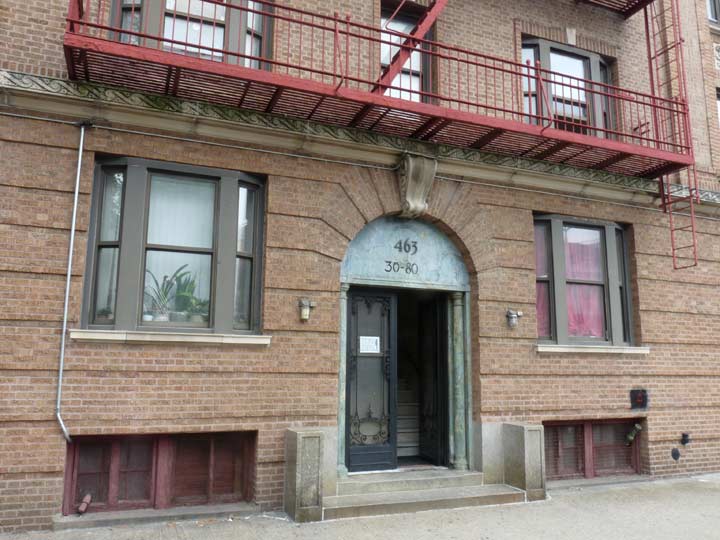 Moving north on 32nd Street past 31st Avenue, here’s another example at 30-80 32nd Street. Interestingly the old house numbering runs from south to north, while the “new” post-1915 numbering runs north to south. 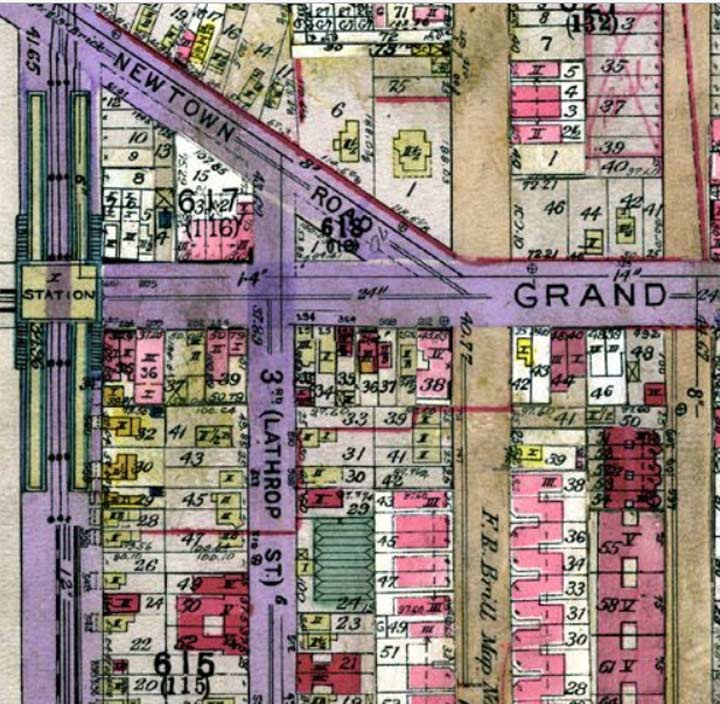 Old Long Island City street numbering is a little complicated. In the 1800s, before streets were laid out, they all bore names (as shown in FNY’s Astoria-LIC Street Necrology, which is by no means complete — I will have to add some more streets). Then, in the first decade of the 20th Century, streets beginning with today’s 30th Street where renamed 1st Avenue, 2nd Avenue, etc. east to Hazen Street. I have a 1922 Hagstrom Map in which the first, second, and present systems are all on the same map. The above map from 1919 gives 32nd Street’s first name, Lathrop Street, and its second, 3rd Avenue. 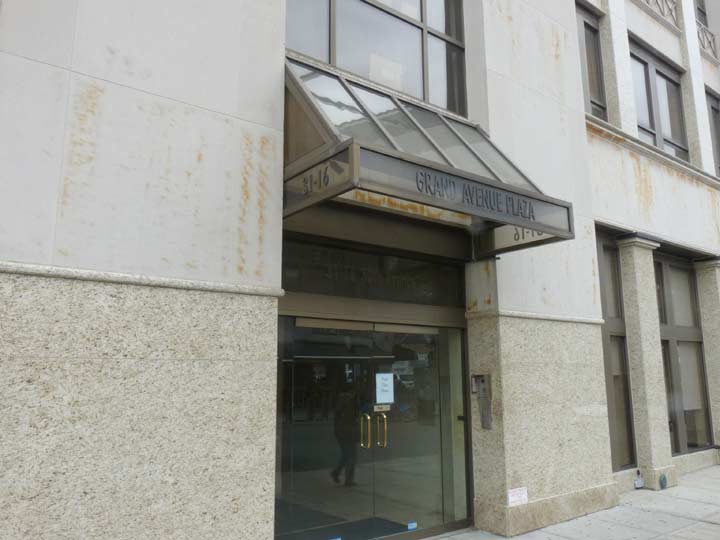 There are other examples showing 30th Avenue’s old name, Grand Avenue, but probably there aren’t any newer ones than on this building at 30th Avenue and 32nd Street, which looks like it was built in the 1970s or 1980s. 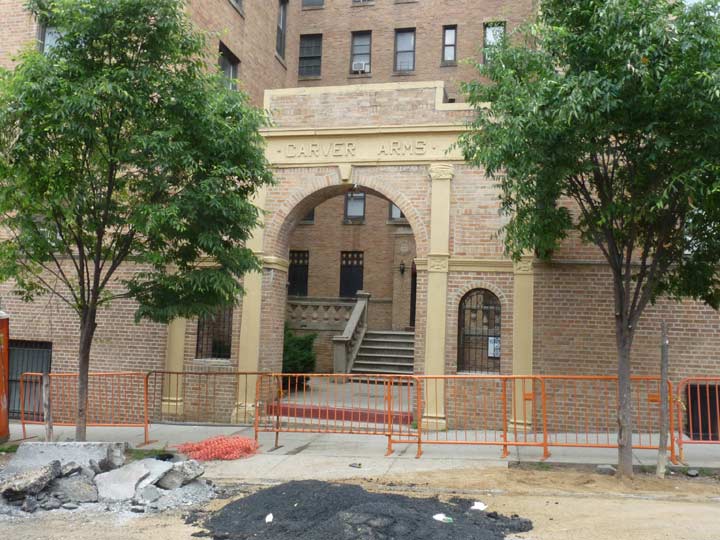 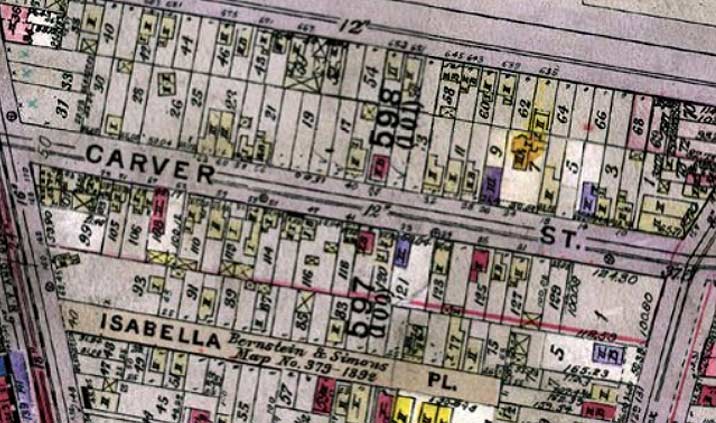 A short distance away is this apartment house on 30th Street between Newtown Avenue and Astoria Boulevard, Carver Arms. Clearly it was built when 30th Street was still known as Carver Street.

The 1922 Hagstrom Map may be correct for Astoria but it dos not show the old Street/Avenue names in Whitestone as I know that the house I own “used” to be on 8th Street and is “now” on 11the Ave. City DOB Records are also incorrect for date of build…City DOB shows 1910 but my deed and original plans show 1927.

A curious thing about Isabella Place(29th Street). I always wondered if this street was supposed to be cut through to Newtown Avenue. I could never understand why the street lights on Newtown Avenue are arranged as if there was an intersection with 29th Street. Up until recently, there were two ancient houses on the north side of the the Avenue, so there could never have been an intersection. The 1988 Hagstrom shows 29th street going through to Newtown Avenue, so the engineer who laid out the street light locations never actually checked the sites.

Archie Bunker’s address in Astoria was 704 Hauser Street, with a RAvenswood 8 number.

Could you help me determine where the old address 39 Hallett St (from the 1900 census) corresponds to on 23rd St in present-day Astoria? It was the home address of my Grandfather and great-grandfather.
All the best.