The Brooklyn neighborhood of Red Hook has been the subject of numerous Forgotten-NY photo essays over the years. On account of its geographic isolation, Red Hook has its cobblestone streets, active and abandoned industrial buildings, large and small waterfront parks, and the now-gone trolley museum operated by Bob Diamond. I’ve always been fascinated by the city’s points, where land sticks out into the water by a considerable distance. One such example is at Erie Basin, where Columbia Street runs for nearly a half mile atop a hook-shaped breakwater. 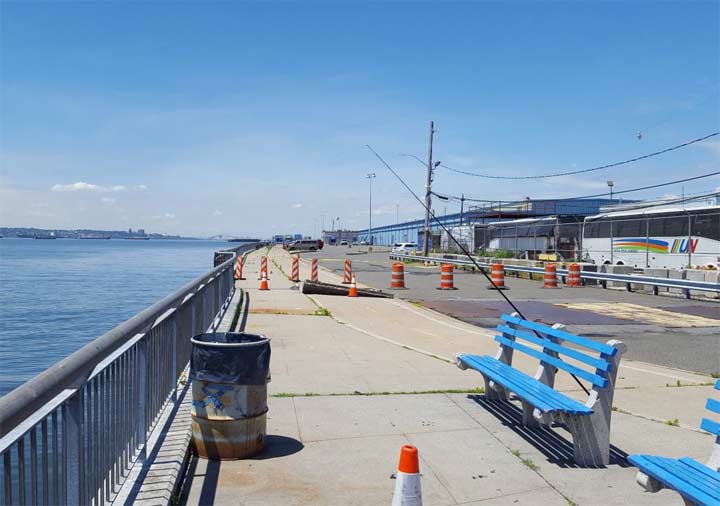 The actual tip that gave Red Hook its name is at Valentino Pier, where the patriots built Fort Defiance during the American Revolution. But as that section of the shoreline lost its hook shape over the past two centuries, another hook formed to its south. In the 1850s, Irish immigrant William Beard purchased land here and using land reclamation from the ballast of ships and building ruins, stretched a new hook into the harbor, forming Erie Basin. His name appears on nearby Beard Street. During the Civil War, the basin was the busiest ship repair facility on the East Coast, and remained that way into the early 20th century. 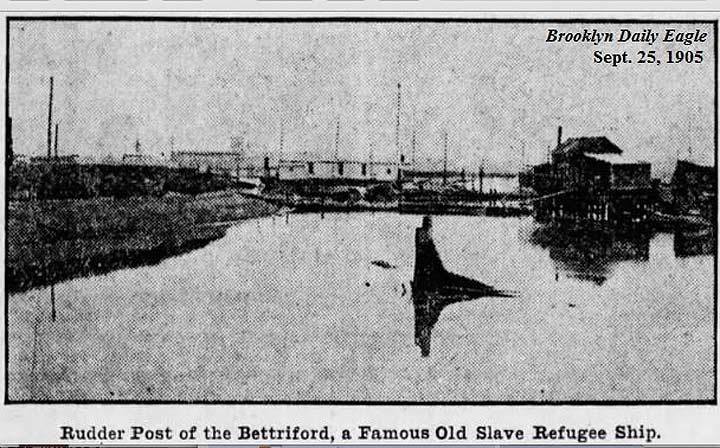 The bottom of the basin had a reputation as a ship graveyard. Among the interred was the Bettriford, a ship piloted by runaway slaves from South Carolina in early 1861. Such a ship would be an extremely valuable museum piece had it been salvaged. With the dredging and reconstruction that have taken place at Erie Basin since its rudder was documented in 1905, I doubt there’s anything remaining of the Bettriford. 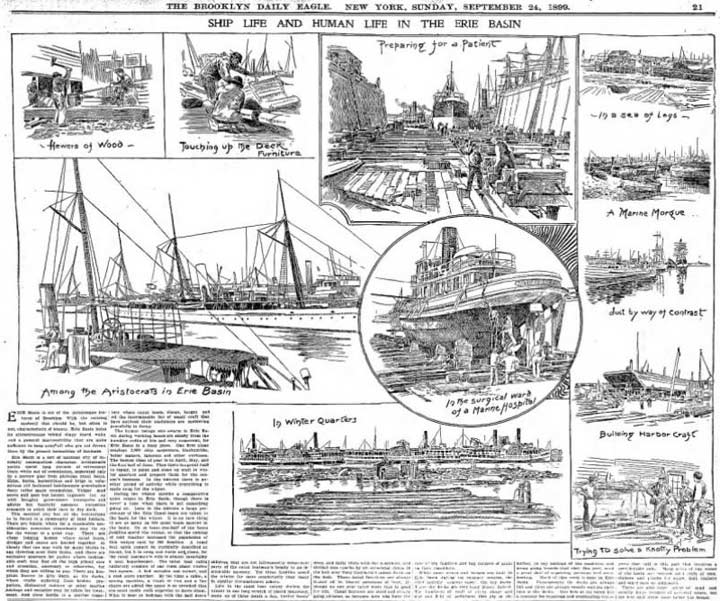 As a cargo port, two-thirds of the goods brought to New York at the time passed through Erie Basin. Following the Second World War, the port fell into decline as larger container ships sailed to the deeper and larger docks at Port Newark. These days, the Erie Basin Hook is occupied by warehouses, a bus depot, and an NYPD tow pound. 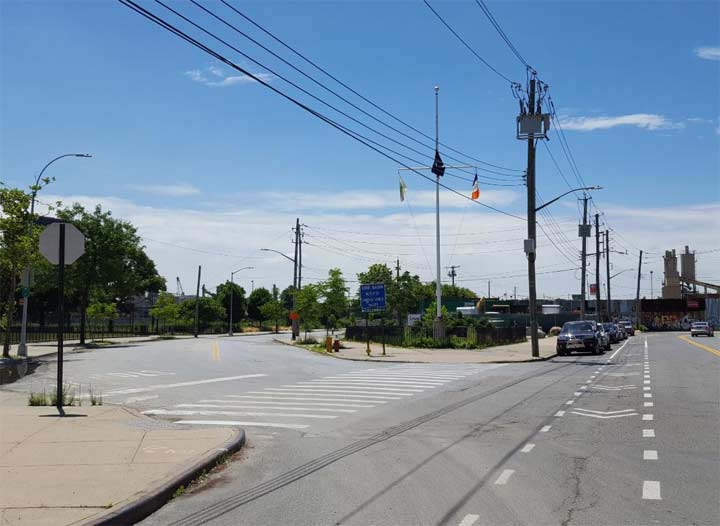 In 2008, Kevin Walsh walked the length of Columbia Street from its start at Atlantic Avenue and the BQE to the Red Hook Community Farm. But across the street from the urban farm, Columbia splits off and continues further. The split is defined by the .04-acre Todd Triangle, a tiny park named after shipbuilder William H. Todd. The nearby Brooklyn IKEA, located a block to the south, stands on the site of Todd’s shipyard. 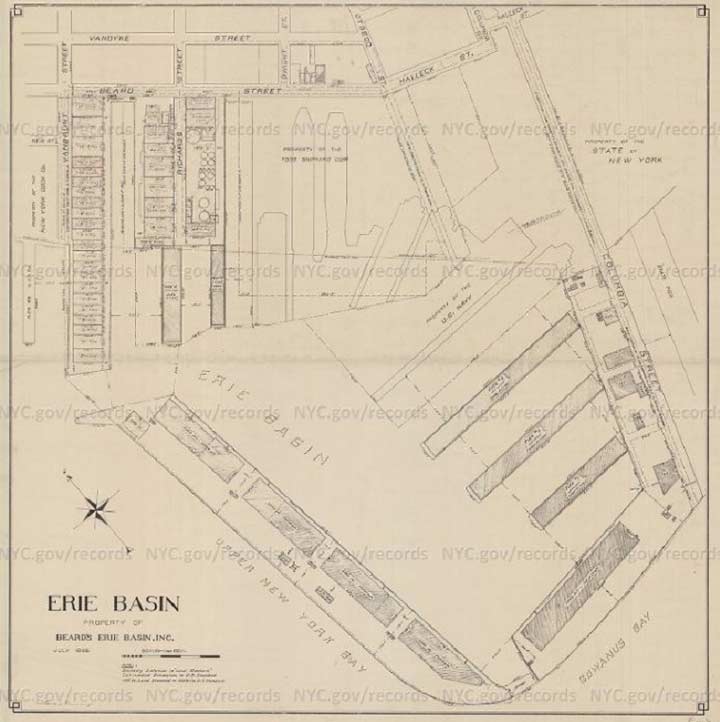 The 1955 map of Erie Basin from the Municipal Archives shows Todd Shipyard in operation, and rows of warehouses and piers on the city’s longest breakwater. 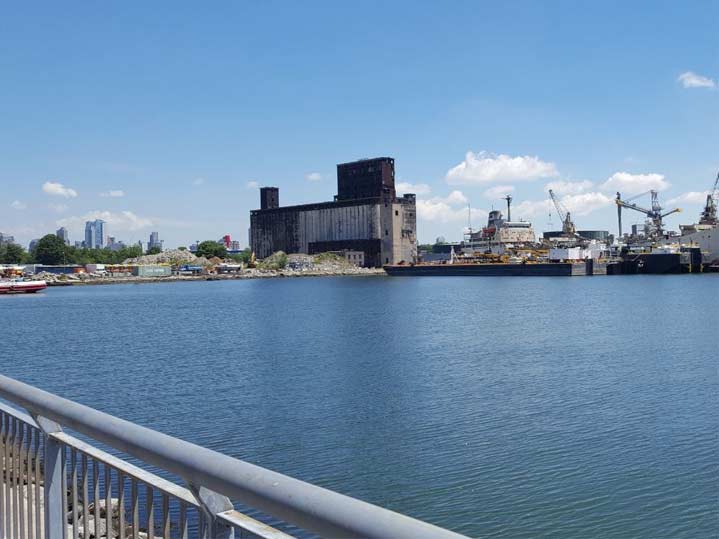 Looking east, the massive abandoned grain silo commands attention. Built in 1922, it became obsolete as soon as it opened. The structure was abandoned in 1965 and is a favorite haunt for urban explorers.The silos were purchased by concrete executive John Quadrozzi Jr. in 1997, and he had many ambitious plans for their reuse. Don’t expect luxury condos here. Like Bob Diamond’s trolley museum and the tunnel he discovered, the grain silos hold plenty of promise, but no results. The old cargo ship Loujaine also stands idle, gathering rust next to the silos. 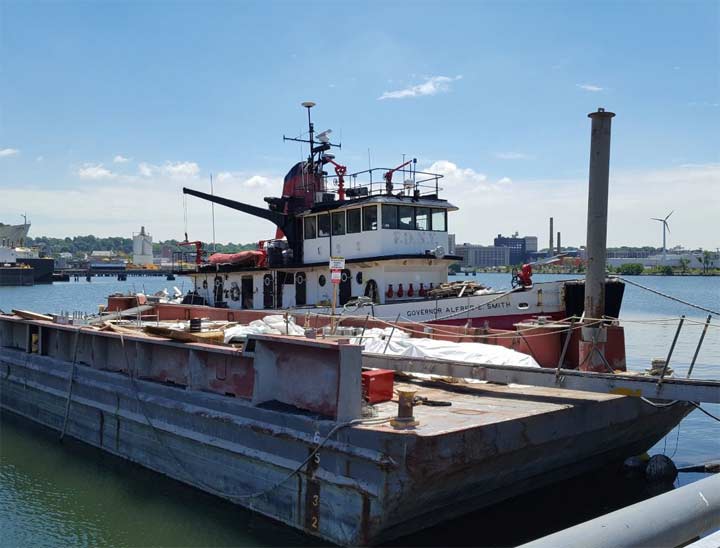 Closer to Columbia Street, the decommissioned fireboat Al Smith floats without purpose. Before you feel sorry for its namesake, keep in mind that this former New York Governor and 1928 presidential candidate has a fancy charitable dinner, Lower East Side playground and NYCHA campus carrying his name. In 2016, there were plans to repurpose it into a floating restaurant. 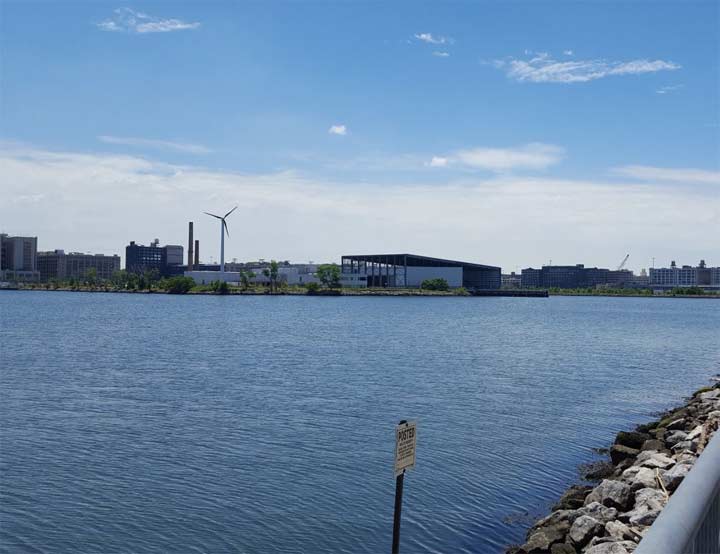 The lone Gowanus windmill dates to 2015, producing 100 kilowatts of electricity for Sims Municipal Recycling. I’m surprised there aren’t more windmills around the harbor. The mouth of Gowanus Canal in this section of the breakwater is privately owned and signs here dictate not to trespass. This includes fishing. 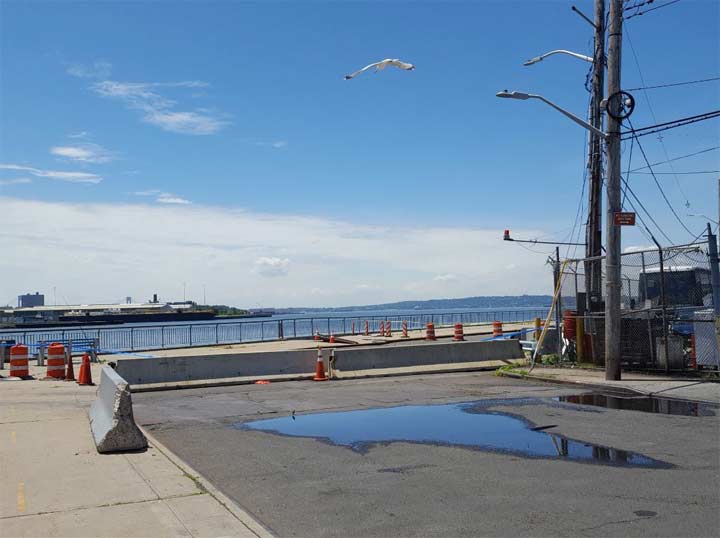 At the point where the breakwater turns, Columbia Street is interrupted by concrete roadblocks and blue police tape. Beyond this point is the NYPD Erie Basin Auto Pound, a scenic but quite expensive spot to recover a seized vehicle. It’s an ideal place for a crime show. With a police car nearby and dozens of officers walking around, I did not continue further on the hook. 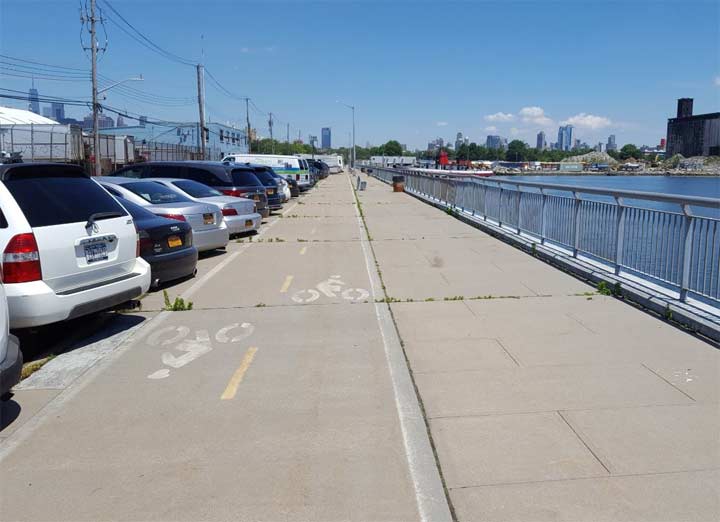 This city has more bike lanes than any other in the Americas. Even on this tip of land there are faint outlines of a bike lane that dead-ends at the auto pound. On my hour of walking back and forth, I did not spot a single biker here. 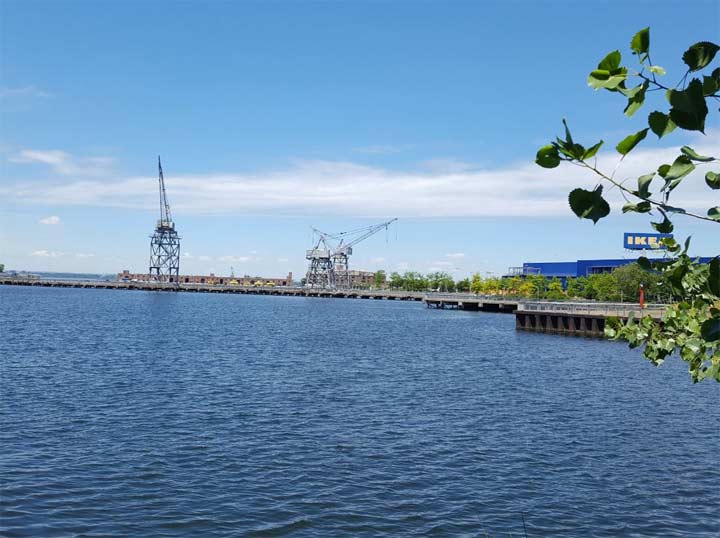 Returning to the mainland of Brooklyn, I rested at IKEA Park, the former Todd Shipyard transformed into the massive retailer. Looking at this scene, I may as well be in Sweden.

The Alfred E. Smith isn’t abandoned or without purpose. It has served for 57 years, the past 26 in reserve. It’s still got a purpose for the FDNY, even if rarely used it has a purpose.

It was sold at auction in September 2016 but as you can see if you look closely the tarp hides the tools and materials being used to renovate it into its new role: that of a floating restaurant!

Work takes time, especially given that they have to add and remove a lot of things to make it over into its new job…

Neither company exists today. These sites were created by a small group of us as a tribute to our parents. Additional images of Erie Basin can be found in the pages.

A Victory ship I was on was in the Todd Yards for 2 wks.Walked over to Sunny’s restaurant had a beer, there was a bored bartender reading The News,then I left.Interesting décor,though.Got the ships bicycle and went bar hopping in the Heights,my old ‘hood.The rest of the crew thought I was suicidal going thru that hood at night, and they were mostly from NY!Yer ass I said,I regularly played in that area as a kid.Damned if I’m scared now.That was about 1980.
And yes there were still some WW2 era ships in the merchant marine back then,as people like to call people liars

I remember Eire Basin very fondly. In 1966 and 1967 I sailed into and out of Eire Basin as an able bodied seamen on the Keystone State and Empire State. The Captain’s name was Irving Jensen. We would arrive back from Europe and do the sign-off/sign-on and some off-load in Eire Basin, then run the coast to off-load/on-load cargo at various ports before returning to Eire Basin, where we topped-off the cargo. From Eire Basin we would depart for Europe and the ports of Bremerhaven, Germany, Rotterdam, the Netherlands, Antwerp, Belgium, Le Havre, France and Southhampton, England in that order where we also did off-load/on-load of cargo in each port. Then back to Eire Basin where we began the process again. Good crews, good ships and good ports; a very enjoyable and rewarding experience.