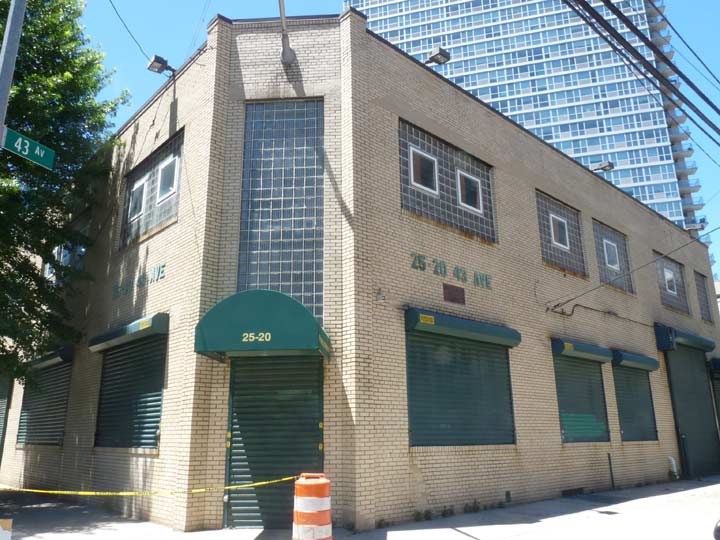 Few neighborhoods in NYC have been changing as quickly as the Hunters Point and Dutch Kills neighborhoods near Queensboro Plaza in LIC, where a Glass House Gang of supertall residential and office buildings have been sprouting like weeds after a rainy spring. I recently wandered around, gawking at the new and making notes of the old. One of the survivors is Roman Bronze Works at 25-20 43rd Avenue at Hunter Street.

The company has a lengthy pedigree: it was established in 1897 by Riccardo Bertelli, and was a subcontractor to Louis Comfort Tiffany’s glassworks studios, which operated from a brick building on 43rd Avenue in Corona for much of the 20th Century.

The foundry’s mold makers, casters, chasers and finishers, and patinaters cast sculptures from plaster and terra cotta models provided by sculptors. They also scaled down monumental and other finished works for editions of collectors’ bronzes, allowing works by Daniel Chester French, Henry Augustus Lukeman  and Augustus Saint-Gaudens to ornament a private library or drawing room.

Bronze is a metal alloy consisting of copper and another metal, usually tin. It has been produced for thousands of years.

STREETS OF THE LOWER EAST SIDE, PART 2

By 1999, due to bad business management, by the nephew of the Riccardo Bertelli, Phil, the foundry was in bad “condition.” Things spiraled out of control to the point where they “lost” the building. A chance meeting with Gene, a Long Island business man (a friend of mine) resulted is myself, Phil, Gene and the foundry’s
last remaining employee, moving the foundry to Copiague-LI.
Despite Phil’s brilliance with the foundry and Art history in general, he was a bad businessman, with a bad
drug addiction.

Those of us around him tried our best (me learning “lost wax” process) to save the sinking ship but his control over the molds/business and his slowly detierating mind overwhelmed everything until it was too late.

By the end of 2001 it was over. Phil and the business both died.
Myself and Gene have a few molds, etc. Gene has a few bronze Remingtons but the once mighty Roman Bronze -known by many Masters, is a thing of the past.

Good afternoon
In 1919 (probably in June) in this foundry was cast in bronze utilizing the traditional lost-wax technique, the statue (3,5 m, 137 inches tall) of Cecco d’Ascoli, an heretic burned alive in Florence (1327). The sculptor was Edoardo (Edward) Cammilli and the statue is currently in the city of Ascoli Piceno (Italy). I’m writing a book about the history of the sculpture but the American side is very difficult to investigate: no picture, no documents (the Roman Bronze Works experienced a fire so the records, now in the Amon Carter museum, from 1919 to 1927 were destroyed), no molds (?)…Do you have any suggestions to help me?