In August 2017 I evaded the dead horse heat of the dog days for a half hour in Berg’n, a food mall converted from a manufacturing warehouse on Bergen Street between Classon and Franklin Avenues. My experience was enjoyable. Full disclosure: I worked for the joint’s co-owner Jonathan Butler (best known for Brooklyn Flea, but before that the webmaster behind Brownstoner.com; I blogged for an offfshoot, Brownstoner Queens). He and partner Eric Demby branched off into food service with Smorgasburg, which pops up in various locations around town in the warm months. 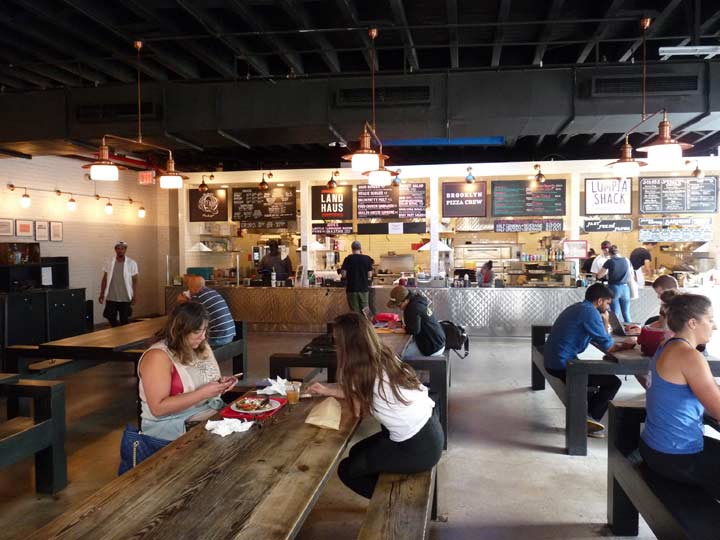 I was the youngest here, but that’s becoming the norm anywhere I go these days except Citifield. The seating is first come first served communal, with handcrafted tables and benches. The selections are comfort food vendors (my favorite kind) such as Landhaus (burgers etc), Brooklyn Pizza Crew, Lumpia Shack (Filipino eats, since closed) and Mighty Quinn barbecue. There is a full service bar on the left, out of the photo. There are events such as trivia Tuesdays, comedy and game nights. I’ll return next time I’m in Prospect Heights. 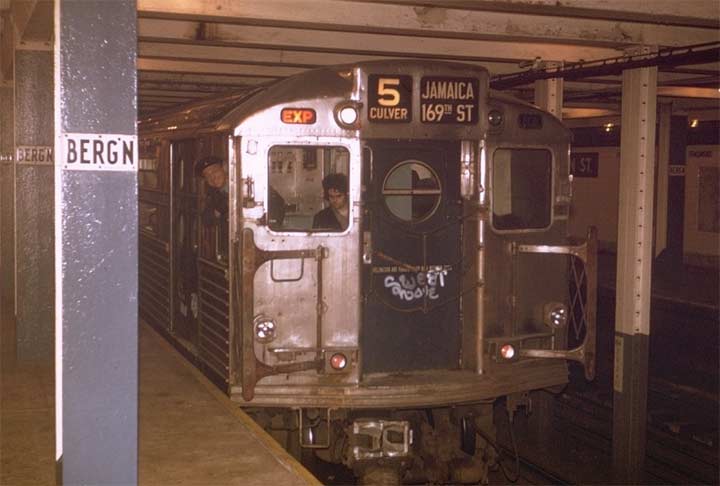 I recognized the Berg’n business’s logotype immediately; it comes from the enamel signs that were formerly found in the Bergen Street F/G train station on Smith Street, a couple of miles to the west. Unfortunately these signs, and their apostrophes, were replaced in the 1980s.

Why does this train, a 1972 photo, bear a number? It’s not an IRT train. Few remember, though, that all BMT division trains also once bore numbers. I am unsure of the overall practice but apparently here, what is now the F train all the way to Coney Island from 169th Street in Jamaica was using the #5 designation for the Culver Elevated, which once ran from Sands Street in downtown Brooklyn to Coney, employing the vanished 5th Avenue El, what became the Culver Shuttle, and then today’s Culver El from Ditmas Avenue south. I’m hazy on when the line finally became the F — I know it was the D for a time. In any case I thought the designation had changed from 5 to F long before this. Andy Sparberg, help me out here!

The JoeKorner is the place to go for subway arcana. 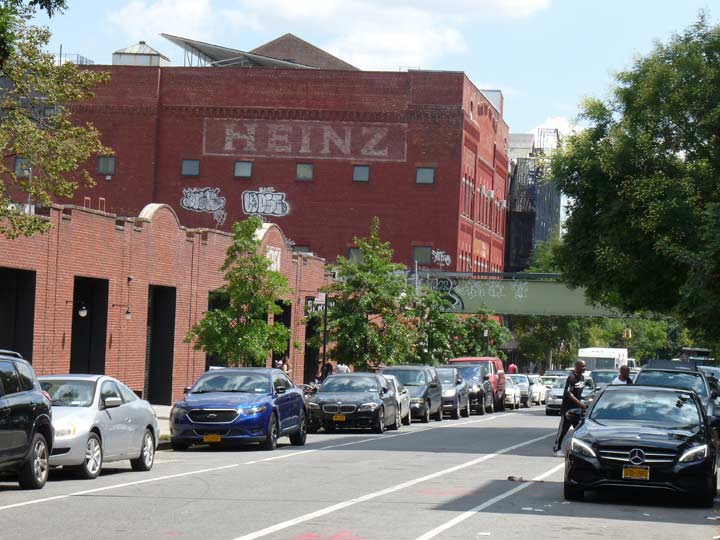 In this shot Berg’n is on the left, with the Franklin Shuttle tracks spanning the street. In the background, a former Heinz factory looms.

The subway car is an R11/34, which ran on the Franklin Shuttle for many years, there were only 10 of them. Possibly the cars didn’t have their roll signs changed after the conversion to letters, and maybe this is a fantrip??

It was a fan trip

I remember the D riding on the Culver line because I recall riding to Coney Island from the 155th Street-8th Ave station in Manhattan.. The F began running in the Culver line when the Christie Street connection began operation in Nov/Dec, 1967.

You must have meant the oldest there at Berg’n. I know the feeling!

The “Heinz” factory in the background is the former Brooklyn Budweiser Brewery. After the St.Louis Budweiser sued them, this became the Franklin Brewery.

I’d say the R-11 at Bergen St is definitely a fan trip. Just look at the two guys in the motorman’s cab. Aside from the rarity of an R-11 on the IND Crosstown line, the only section of the Culver line then extant was the Ditmas Ave shuttle, not here, and the 169th St Jamaica terminus was superceded decades earlier by 179th St.

The original Culver line was connected to the 5th Av (Brooklyn) El via the route that used to be the Culver shuttle. From the junction at the 36th St/5 Av, after travelling thru the BMT 39th St Yard and via the jumble of tracks there, thru the lower level of the 9th Av station, over what was later called the Culver Shuttle until McDonald Av, where it headed to Coney Island. When the 5th Av El closed in 1940, I believe the Culver line was routed via Nassau Loop rush hours and at other times ended at 9 Av? These all BMT lines were numbered. In 1954, the ramp from the IND Church Av station to the Culver line opened. This is when IND D trains used the line. This was when the Culver Shuttle was created. In 1967, with the opening of the Chrystie St Connection, Division B F trains began running on the Culver line where they are to this day.

Smorgasburg ran their overpriced flea-market in upstate Kingston for a few years. Then the Brooklyn hipsters discovered that Kingstonians had better uses for their money than $15 sandwiches and craft beer!

The old BMT Triplex cars had a number designation from the very begining….Brighton Line expresses were number 1 and the Sea Beach was number 4….BMT Standards had no number designator up front….

Yes, the BMT Standard cars ran the old Nassau Street loop in the rush hours and at other times, in the very early 50’s, the BMT used old Brooklyn Union Gate cars from Coney Island to 9th Ave for transfer to West End cars….Gate cars being wooden, were not permitted to enter tunnels to Manhattan….every since the Malbone Street accident in 1918.