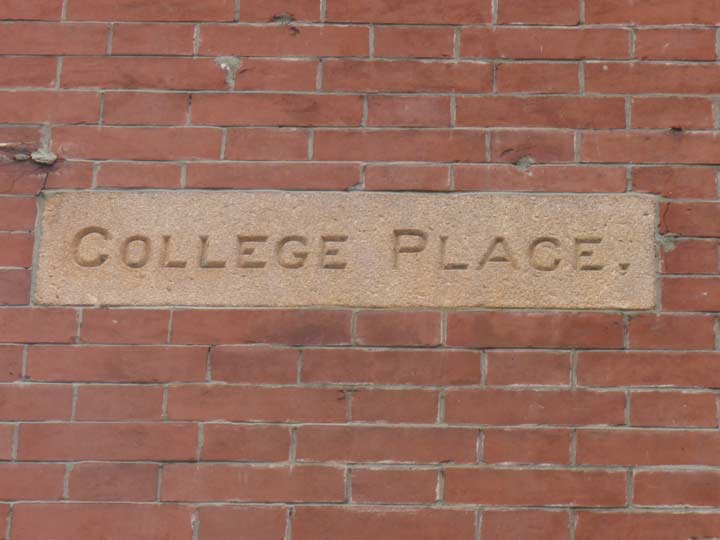 On the West Broadway side of the handsome brick building at the NW corner of West Broadway and Warren Street (specifically, 82 West Broadway) is a reminder of one of West Broadway’s old street names, and also a recollection of the downtown presence of the school that would one day become Columbia University.

In 1754, King’s College was founded by royal charter of King George II, and classes were held on Trinity Church grounds. In 1760, the school moved into its own building on land donated by Trinity Church at present day Park Pl.

Classes were suspended during the Revolution, when British troops occupied the building. In 1784 when classes resumed with a new charter, it was thought that the name “King’s College” was inappropriate, and it was changed to Columbia College.

In 1830, the stretch of West Broadway between Warren and Barclay St was renamed College Place;  in 1857, Columbia sold the campus and moved to Madison and East 49th St. The main hall of the Park Place campus was demolished in 1860.

Until about 1850 West Broadway between Warren and Canal Streets was known as Chapel Street. Many streets’ names in the area were influenced by Trinity Church: streets were named for sextons, ministers, and churchmen, as was Church Street a block away.

Ultimately the entire stretch between Vesey and West Houston was called West Broadway, though the northern section from Houston north to Washington Square was first renamed South 5th Avenue and later, LaGuardia Place. NYC has always had a penchant for naming numerous roads “Broadway” in honor of the street most associated with the island, and the trend also carried over to 5th Avenue for a time.

I once did an entire 3-part post on West Broadway in 2008 — things have changed somewhat since then.

On the Warren Street side of that building is a rarity in Manhattan – an actual alleyway.