There are only three subway stations located on 5th Avenue in Manhattan, and none at all in Brooklyn, which also has a lengthy 5th Avenue. In Manhattan, the Queen of Avenues has always been remarkably free of steam railroads, trolley lines, elevated trains above or subways beneath it, as it has always been a road for promenading and parading, especially each Easter Sunday, when chepaeaued throngs emanate from St. Patrick’s Cathedral.

Three crosstown lines do have stations on 5th Avenue: The Broadway BMT on its way to Queens, as N, R and W trains stop at the 5th avenue station serving Grand Army Plaza and the Plaza Hotel; the E/M trains on 53rd Street; and the Flushing IRT trains stop at the 5th avenue station at 42nd Street serving the New York Public Library and Bryant Park (actually the station was renamed 5th avenue/Bryant Park in recent years, even though the park fronts on 6th Avenue).

The IRT station opened in 1926, making it among the newer stations on the line. The original Flushing line traveled between Grand Central Terminal and Vernon-Jackson Avenues in 1915, and was greatly expanded both east and west, with extensions in 1917, 1925, 1926, 1927, 1928 and the latest, to Hudson Yards in 2015. The bulk of the line celebrated its centennial in April 2017. 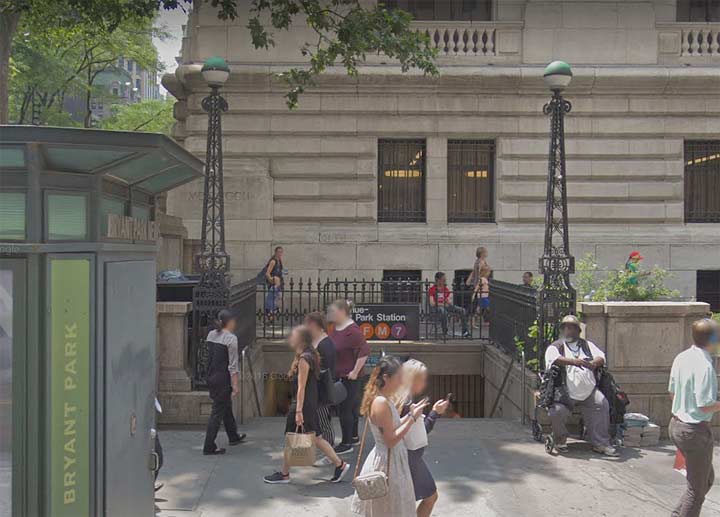 I’ve always liked the IRT 5th Avenue station. It’s accessed through a pedestrian tunnel from the 6th Avenue IND concourse, decorated with Samm Kunce’s “Under Bryant Park” which replaced photos of the Receiving Reservoir, which occupied the Library’s space on the corner of 5th and 42nd from the 1840s through 1912. It’s also entered via this point on the corner. I like the two monumental lamp stanchions; I’ve only seen them at one other stop, the City Hall BMT on Broadway and Murray Street.

Once within, you go down a fairly steep incline (it’s easier to enter the station that exit it because of that) and you’re on a mezzanine. You can choose to descend to the #7 train platform, or continue to the end to the tunnel to the IND lines under 6th Avenue. On the mezzanine are the only tiled signs in the station that completely spell out the stop. 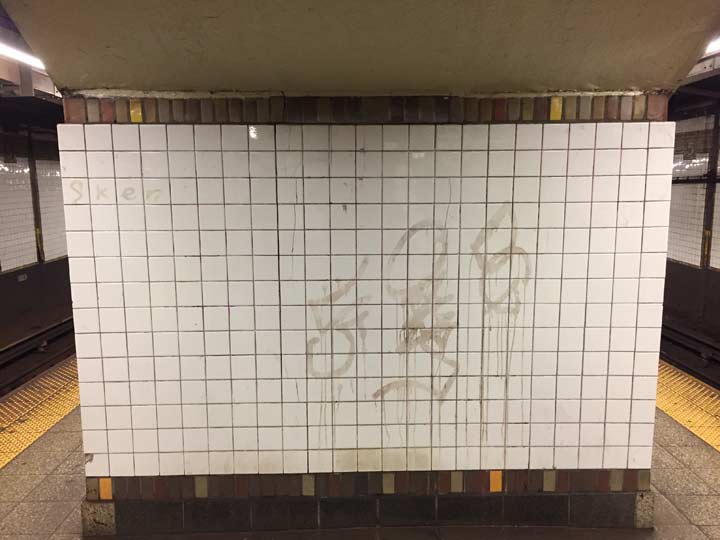 What impresses me about the #7 5th Avenue platform is the restraint taken with the mosaic tilework. Toward the end of the time that tile mosaics were used in stations, from about 1925 to 1928, subway architect/art director Squire Vickers decorated them with near riots of color, such as in the stations found along the L Canarsie Line or at Main Street on the #7.

Vickers did it a little differently here, sticking to the earth tones of previous BMT/IRT tiled stations, but limiting himself to browns, with brick red thrown in, and very occasionally, a bright gold tile, shown here on the mosaic bands behind a staircase. 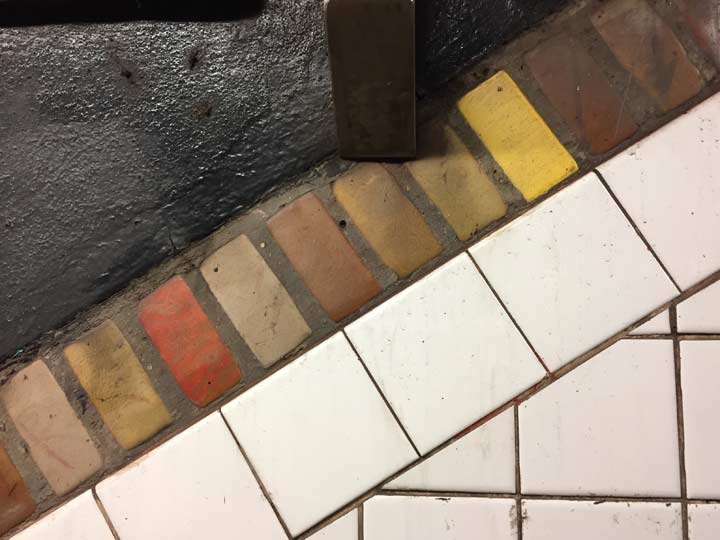 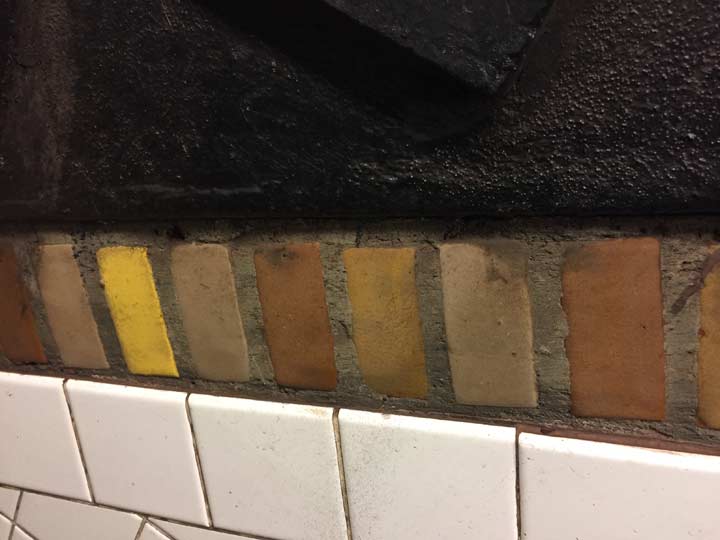 The colored tiles are deployed quite sparingly, on the borders of the white tiles on staircases… 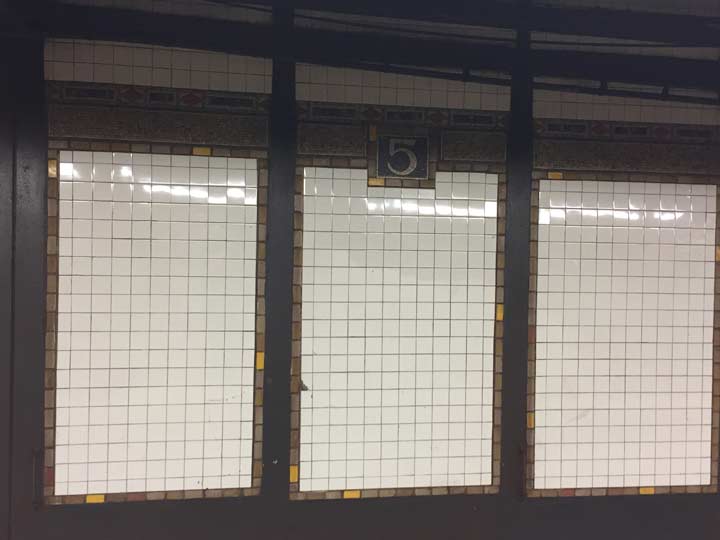 …and in a subtle tapestry effect, on the white tiles of the station walls. 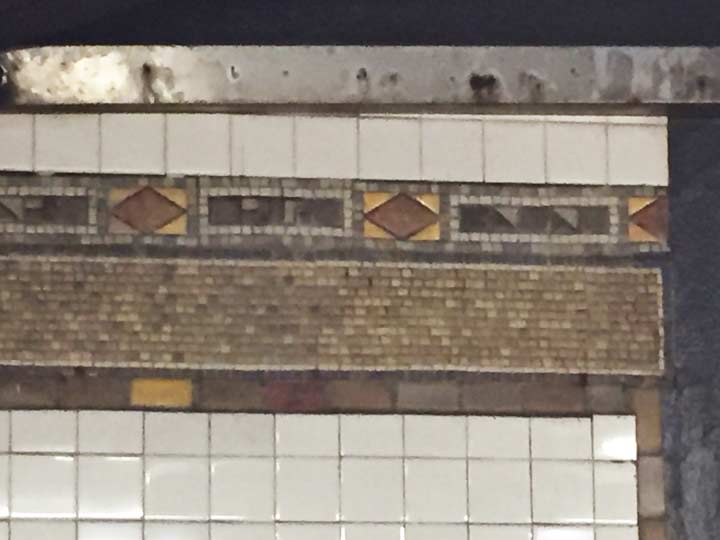 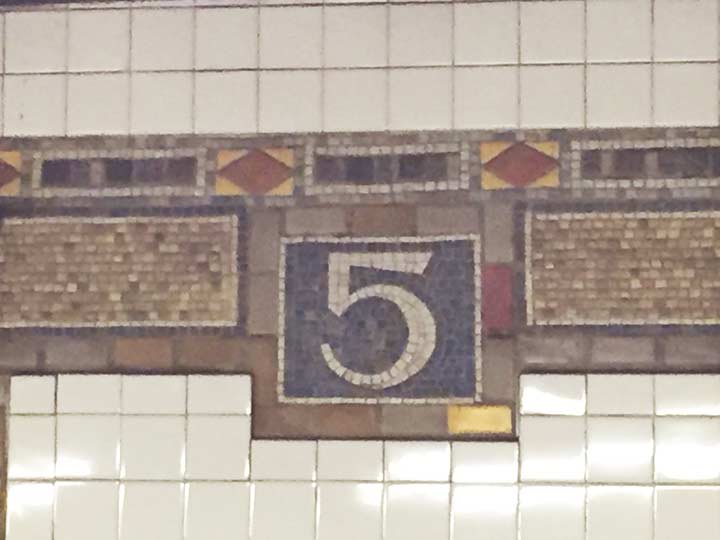 Absent any mosaic station identifier nameplates, the simple numeral 5 serves to identify the station. The 5 appears in a dark blue field with a border conforming to the overall color scheme of the station–browns, brick red, and a single gold tile.

There is a third 5th Avenue station on IND E and M lines at 53rd and 5th. Two single track stations, one above the other.

What about the station for the IND on 53rd Street?

What about the 5th Avenue IND station on 53rd Street? That makes three. Also, the BMT Broadway station at 23rd Street has an entrance on 5th Avenue right next to the Flatiron Building.

There is also a subway station located at 5th Ave and 53 St underneath 666 5thAve. The station is presently served by the E and M trains. This station is the second stop in Manhattan for the 6th and 8th Ave lines leaving Queens, and the dividing point for these lines. Upon exiting the station the 6th Ave train (once the F, now the M) would switch and head south to continue under 6th Ave, while the 8th Ave line (the E) would continue west to 7th Ave and then head south to continue under 8th Ave.

I think you omitted the IND station at 53rd Street, which the E and M trains now serve. It’s much deeper than its two brethren north and south because it has to go under the IRT Lexington Line and the Park Avenue Metro North (former NY Central RR) tunnels. Both are themselves two levels, so the IND had to go about 75 feet down to clear those tunnels.

I knew I forgot one…

There’s a third 5th Ave station in Manhattan: on the IND Queens line, currently served by E and M trains. Also the tunnel between the Flushing line station & the 6th Ave IND concourse wasn’t constructed until the mid 1960s, which gave a greater reason to use a previously sleepy IRT station without any transfer connection.

I knew I forgot one.

Could never quite figure why the Fifth Ave stop on the Flushing Line has such a steep pitch heading toward the turnstiles. If the walkway to/from the 42nd St stop on the Sixth Ave IND was built after the IRT station, why not gradually increase the pitch to the point where it meets the Fifth Ave station? The walkway is very open and flat, then as soon as you go through the turnstiles at Fifth Ave, you get that really steep walk to the stairs leading up to street level. Was the IRT station built like that, or were the turnstiles lowered to meet the IND walkway 20 years later?

The steep pitch at the 5th Ave. end has always been there. The tunnel is actually below the south sidewalk of 42nd Street alongside the north side of Bryant Park. The Flushing Line was built 22 years after the original 42nd Street Tunnel (today’s Shuttle) opened, so it has to avoid the original tunnel. West of the 5th Ave. station, the alignment swings under 41st Street where the Times Square platform is located. When the Sixth Ave. IND was built 1936-40, it had to go under the 42nd St. Shuttle and over the #7 Line.

The 450-foot passageway between the Sixth Ave. IND and IRT #7 opened in 1971, and is at the opposite end of the #7 5th Ave. Station. There were always stairways to/from the street (next to Bryant Park close to 6th Ave.), and were identified by a “6th Ave.” exist sign on the #7 platform.

I remember running into (and out of) the station adjacent to the library in order to recharge a Metrocard for use on a 5th avenue bus. Glad it was there.

Question: What makes you use the confusing combination of outdated Subway monikers (IRT, BMT, IND) along with the modern ones (the simple number & letter lines that have been in use for 52 years)? For example, these excerpts: “…the Broadway BMT on its way to Queens, as N, R and W trains stop at the 5th avenue station”; “…the IRT 5th Avenue station…accessed through a pedestrian tunnel from the 6th Avenue IND concourse…”; “… the #7 train platform…to the end to the tunnel to the IND lines under 6th Avenue”
Huh??
Although I almost know your answer I bet you lose a lot of your under 50 audience to your otherwise great sleuthing & writing because of that. Just sayin…

I don’t think he has to worry about that. I’m 42 years old, and have been following the site since 2001. I remember as a kid back in the 80’s and early 90’s train conductors making IRT/IND/BMT references, wondering what the heck it meant.