Kings Highway in Bensonhurst? For over a century, Kings Highway has run through a lot of different neighborhoods, but Bensonhurst isn’t one of them. Well, it isn’t anymore.

Today, Kings Highway runs from Bay Parkway and 78th Street, just barely inside Bensonhurst, generally east and northeast to East 98th Street in Brownsville. But it’s one of the oldest extant roads in Brooklyn, and probably the United States. I’ve called it Brooklyn’s Mother Road. Records have the road debuting in the early 1700s, early in the colonial period. The original route ran from what for a long time was the Fulton Ferry landing, at the East River end of Old Fulton Street, and it ran in a general southeasterly course to about what is today’s Avenue M. Then it turned west and southwest, heading for the waterfront again at the Narrows at the ferry then run by Denyse Denyse. It was his ferry landing where the British arrived in 1776 to challenge the newly-declared independent American patriots at the Battle of Long Island, in which the British mostly routed the Americans, who were able to retreat with the aid of Lord Sterling and a contingent from Maryland. That’s a story for the history books, though. Kings Highway never lost its old name, even after American independence was finally secured in 1783.

The section of Kings Highway between Bensonhurst and Bay Ridge was lost over a century ago, and few traces remain, though there are just a couple, if you take a close look in certain sections. 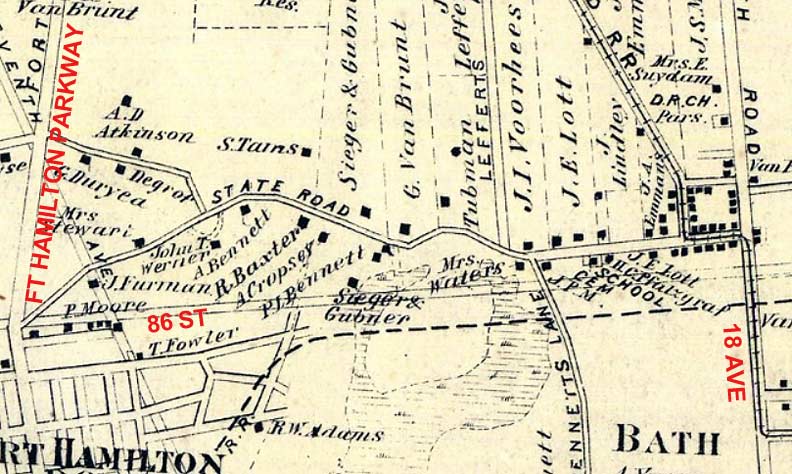 This is a section of the Town of New Utrecht map published in 1873 by Beers. At the right side of the map are railroad tracks representing a steam railroad that was electrified and finally placed on an elevated structure in 1917–it’s today’s D train. At this early date, two sets of lines on the map represent major routes today–86th Street and Fort Hamilton Parkway. Meanwhile, there’s State Road, which sort of undulates this way and that. This is the western end of Kings Highway, which probably overlaid a Native American trail that curved to avoid topography such as hills and swamps.

By this time, State Road extended from what was the corner of Fort Hamilton Parkway and 86th Street to 18th Avenue, and continued east about a block north along 18th.

Already, the village of Fort Hamilton, today the southern end of Bay Ridge, had a grid plan of streets. The dotted lines represent property borders; owners’ names are inscribed within. The cemetery plot on the right side is still there, part of the Dutch Reformed Church established in 1826. The name Bath Beach was already in use, taking its name from a British spa town. Horizontal dotted lines represent swampy ground. Names like Cropsey–still on Brooklyn street maps — and Gubner, formerly — can be found on the map. 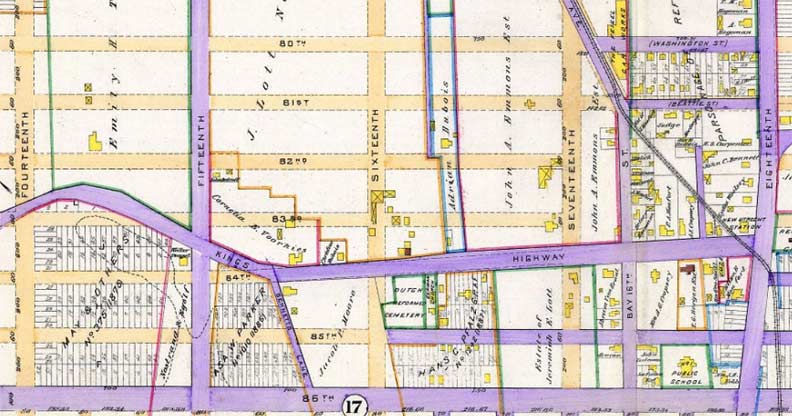 Moving ahead just 17 years to 1890 when this map by E. Robinson of New Utrecht was published. The roads in purple were already paved, while the ones in buff had yet to be opened. We see that Kings Highway was still a major east-west route. As we’ll see the straight section between 16th and 18th Avenues is still there. 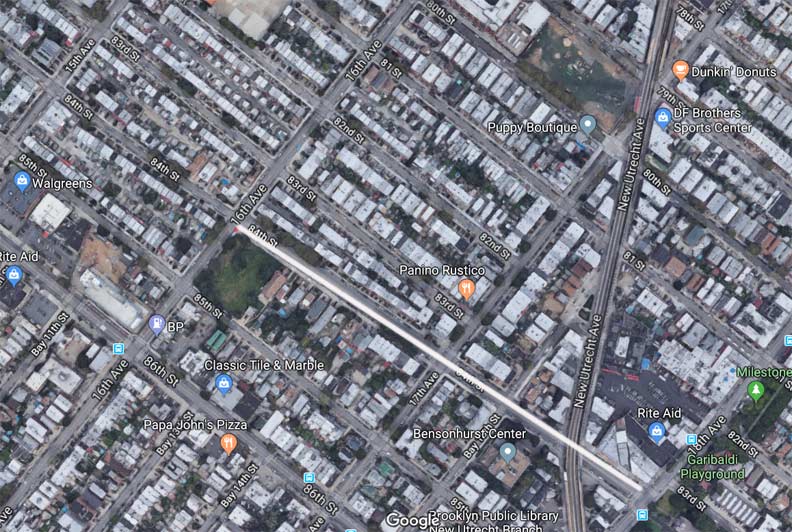 Here’s a modern-day aerial shot of eastern Bensonhurst, which the town of New Utrecht became when it became part of the city of Brooklyn and by 1898, part of Greater New York. I have highlighted in white the section of 84th Street that’s wider and escapes from the grid just a bit. This was originally part of Kings Highway. 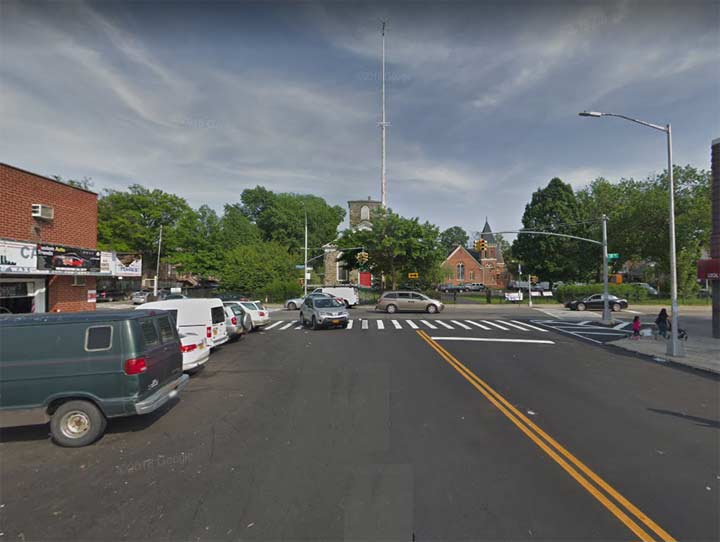 This is that wider section of 84th Street looking toward 18th Avenue. The 1826 Dutch Reformed Church and the last of several Liberty Poles that mark an original pole built by American patriots to mark the departure of the British are seen at the east end of the road. 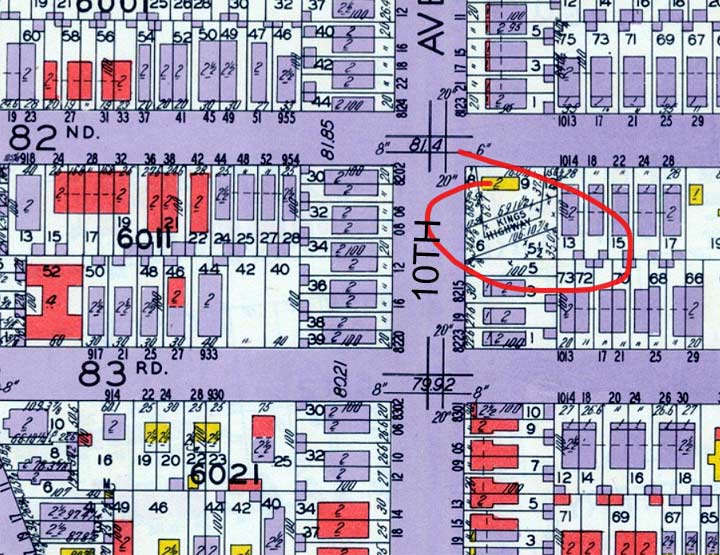 In the first two decades f the 20th century, the street grid of Bensonhurst and Dyker Heights was rapidly built out, with private residences quickly following. But as this 1929 Belcher Hyde atlas indicates, there were still some bare spots–and within those, echoes of Kings Highway. A short dead-end section is marked on the east side of 10th Avenue between 82nd and 83rd Streets. 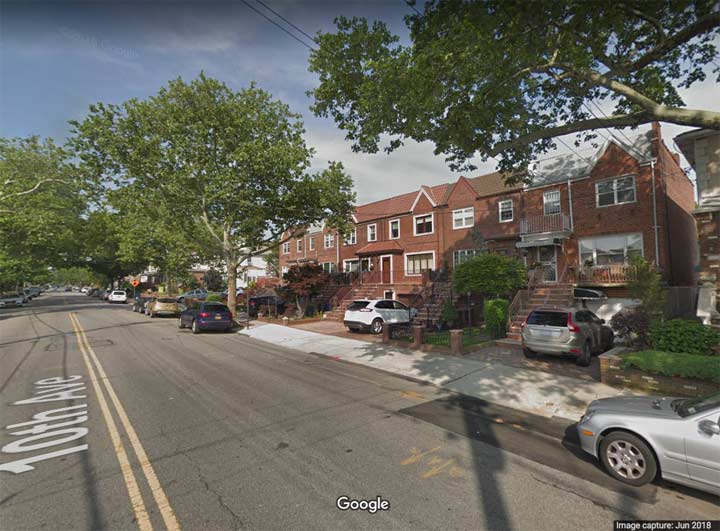 This is that stretch today, without a trace of Kings Highway. 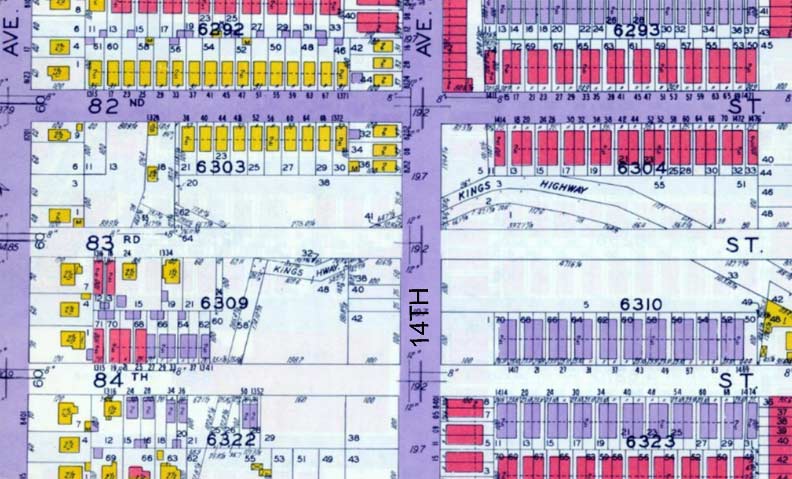 A longer stretch of the old Kings Highway manifested itself along 83rd Street between 13th and 15th Avenues. You can match up this twisting section with the maps from 1873 and 1890 above. This stretch of Dyker Heights remained unbuilt-on until the city could officially close this short stretch of Kings Highway. 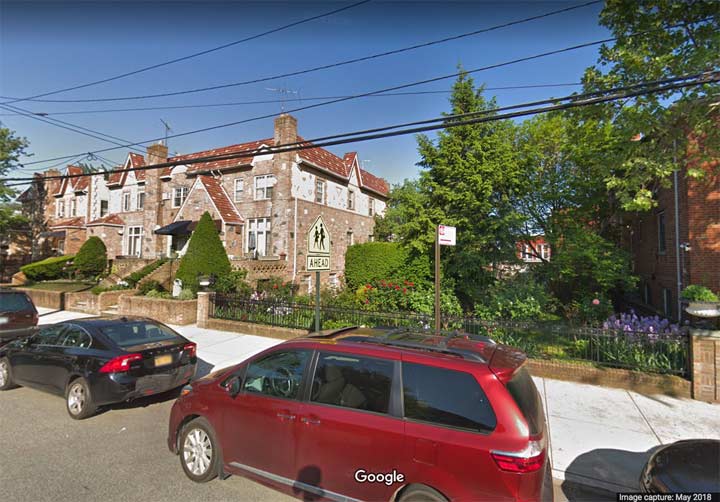 Notice that Kings Highway crossed 14th Avenue just north of 83rd Street. To this day, there is an open section there, part of a garden belonging to either household on either side of it! 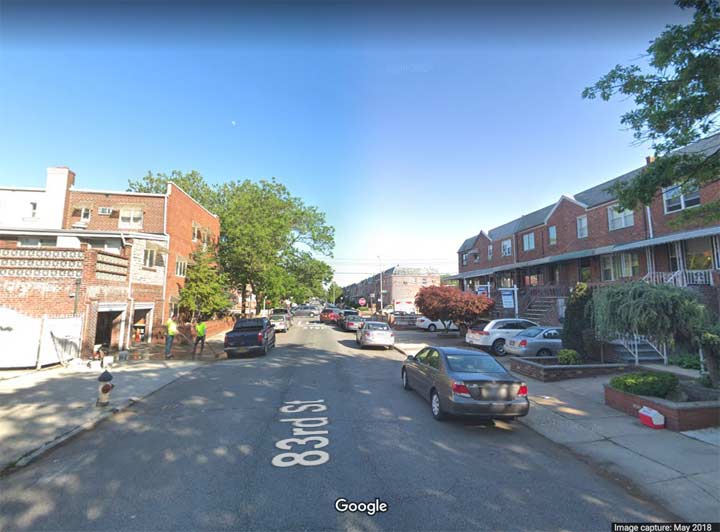 83rd Street, looking toward 15th Avenue. In the colonial period, before there was a 15th Avenue or 83rd Street, Kings Highway passed through here. Today, not even an echo of the hoofbeats or the creaking of the wagons that used it remain.

Inspiration for the Randy & the Rainbows song? 😉

Anyone remember the Hi-Bar (Chinning Bar) on 24th Ave. Behind the Stillwell Theatre