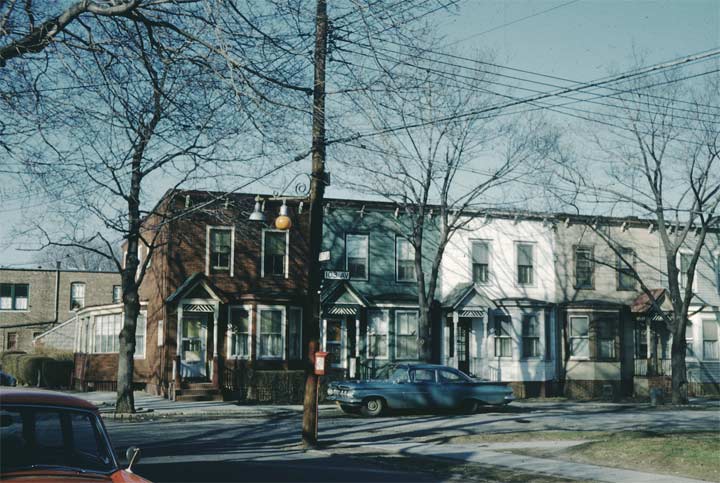 I have found some slides of eastern Queens scenes circa 1960 or so, the dawn of the modern age in Queens. This is a cluster of attached houses on 103rd Avenue at 217th Lane in Queens Village. In Queens street and house numbering nomenclature, north south streets having the same number are arranged in a hierarchy, with Streets coming first, then Places, and then Lanes; for east-west streets, Avenues are first, followed by Roads, then Drives, then Terraces. (there is a Court or two but I’m not sure where to place it.)

This shot gives an infrastructure fan like me some stuff to chew on. The street signs are simple white with black lettering, standard issue in Queens in mid-century; between 1964 and 1985 or so they would be replaced by vinyl signs that were off-white with blie lettering. Of the older variety, there were a couple of them still extant when I moved to Queens, but the last one I was aware of, on 54th Avenue in Little Neck, succumbed soon after I posted its picture in Forgotten NY– not a coincidence, I’m sure.

Illuminating the street is an incandescent light bulb shielded by a reflector cone attached to a scrolled mast. This variety replaced radial-wave lamps, with flat, fluted edges; look in any batch of pictures of Queens and you’ll see them by the thousands. Within  a couple of years, the mast and its incandescent bulb would be replaced by a mercury-vapor lamp shining a greenish-white, in turn replaced by yellow sodium vapor in the 1970s, and finally by bright white LED lamps in the 2010s. Also, notice the fat globe of a fire alarm indicator bulb suspended from the mast. These would shrink in size in subsequent iterations. 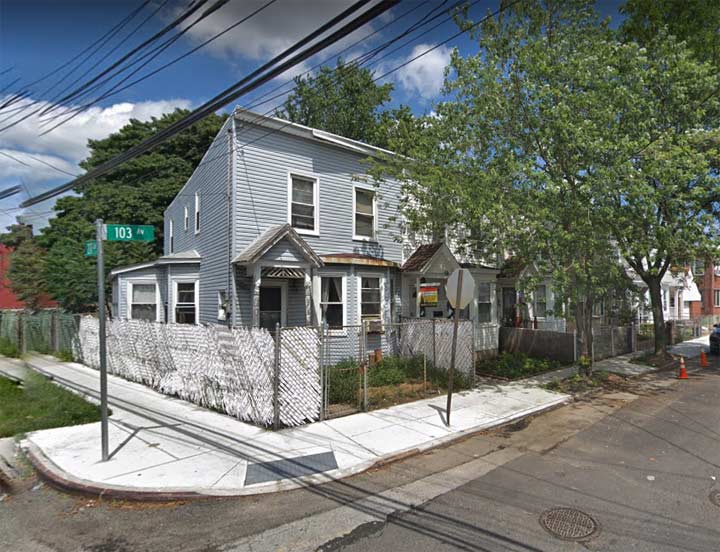 2018 finds the attached homes still intact, but now sheathed by aluminum siding. A new sidewalk has just been installed. Change comes slowly to Queens Village, but across the street, the fire alarm is still there, but the streetlamp is LED and the street signs are green.

Queens Village changed very rapidly around 1980. Block busting.
My old home has some very interesting external electrical circuits, suggesting to this EE apartments.
My next door neighbors old home has an air conditioner in the “furnace room”. Why?
But then again back when I lived in QV we had little crime. Now they have murders and rapes etc….
But back then QV was filled with WWII vets. They protected the neighborhood.
Also back then city employees has to live in the city. Think a local cop who knew the neighborhood.