“What hath God wrought?” With those words, the Information Age began.

You know Samuel Finley Breese Morse (1791-1872) invented the telegraph and sent that first famous message in 1844 … but did you also know that prior to that, Morse was an accomplished painter? His portrait of the Marquis de Lafayette hangs in City Hall. Byron Picket’s 1880 bronze of Morse can be found just inside Central Park at 5th Avenue and East 72nd Street.

The invention of the telegraph allowed the West to open to American colonization; the swift exchange of messages that formerly took weeks to deliver. 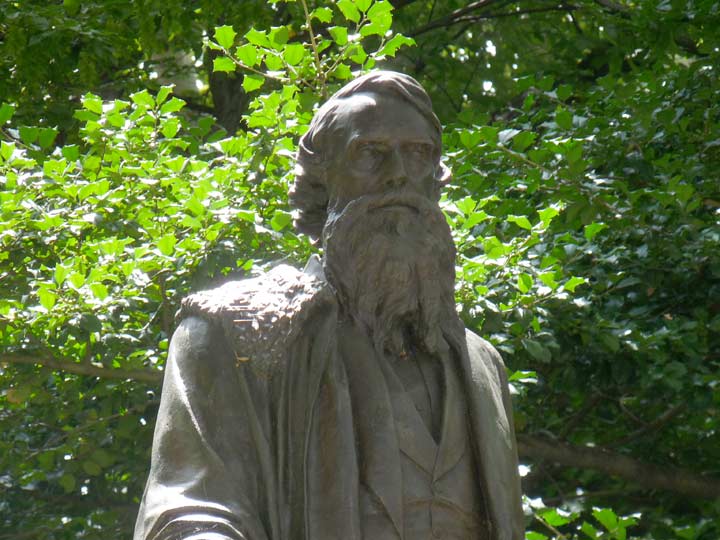 The inventor of the telegraph began his career as a prominent portrait painter (including John Adams and James Monroe) and was elected first president of the National Academy of Design in 1826. But he became more and more interested in science and its practical uses. In 1839 he learned photography from its own inventor, France’s Louis Daguerre, and introduced the process in the United States.

In 1825 Morse was commissioned to paint the portrait of the Marquis de Lafayette in Washington. A messenger delivered a note from his father, notifying him that his wife was quite ill. He immediately left for his home in New Haven but by the time he reached home, his wife had passed away and was already buried. He was inspired to think of methods of immediate long-distance communication.

Consulting with scientists he knew that worked with electromagnetism, including Charles Jackson of Boston, Morse developed an experimental single-wire telegraph by 1835, with the first practical telegraphy system launched in 1844 between Washington and Baltimore along a series of telegraph poles (underground construction was impractical at the time). The first message, sent in the Morse code that he also devised in “dots and dashes,” read: “What hath God wrought!”

In 1845, Morse hired Andrew Jackson’s former postmaster general, Amos Kendall, as his agent in locating potential buyers of the telegraph. Kendall realized the value of the device, and had little trouble convincing others of its potential for profit. By the spring he had attracted a small group of investors. They subscribed $15,000 and formed the Magnetic Telegraph Company. Many new telegraph companies were formed as Morse sold licenses wherever he could. The first commercial telegraph line was completed between Washington, DC, and New York City in the spring of 1846 by the Magnetic Telegraph Company.

Morse, in his time, was known for his anti-Catholic and Nativist sentiments and his support of slavery. However his accomplishments in the arts and in communication can’t be dimmed.

Morse hand wrote, in pencil, on the original “ticker tape” — “What hath God wrought upon Mankind”— and it is housed in the US Library of Congress in D.C. it’s about 30 inches long.