A week or so ago, FNY posted a survey of a number of Flushing cemeteries that are relatively close together: Mount St. Mary’s, Flushing Cemetery, and what is known as The Old Flushing Burial Ground. I realized a short time later that I can do the same thing in Jamaica, where there are a number of cemeteries — some very old — that are walkable from one to the other. One may be quite familiar to FNY readers, but I’ll provide a short synopsis for each. 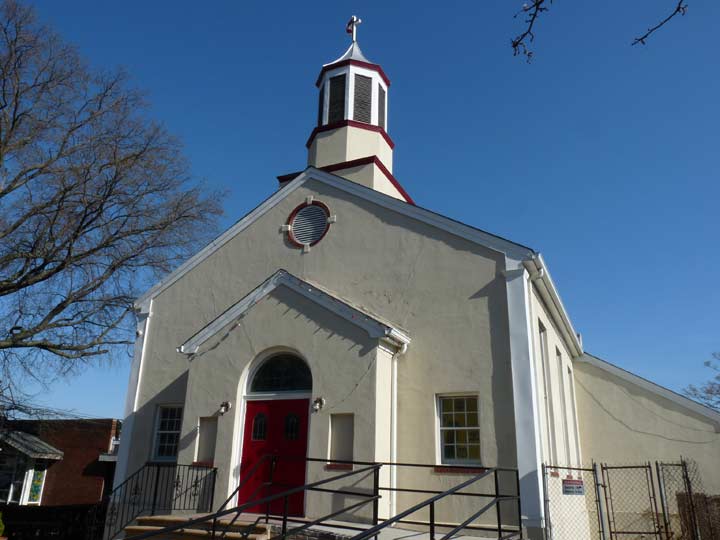 This is likely the least-known of Jamaica’s older cemeteries. Although it’s located at Liberty Avenue and Guy R. Brewer Boulevard, it’s officially the churchyard of Jamaica’s First United Methodist Church, which is located some distance away at 162-10 Highland Avenue in Hillcrest; the church continues to protect and maintain the cemetery, which dates to the early 1800s and hasn’t had an interment for several decades. The space is well-protected, with two separate chain linked fences, but the grounds are overgrown with vegetation and are hard to photograph in the warm months. 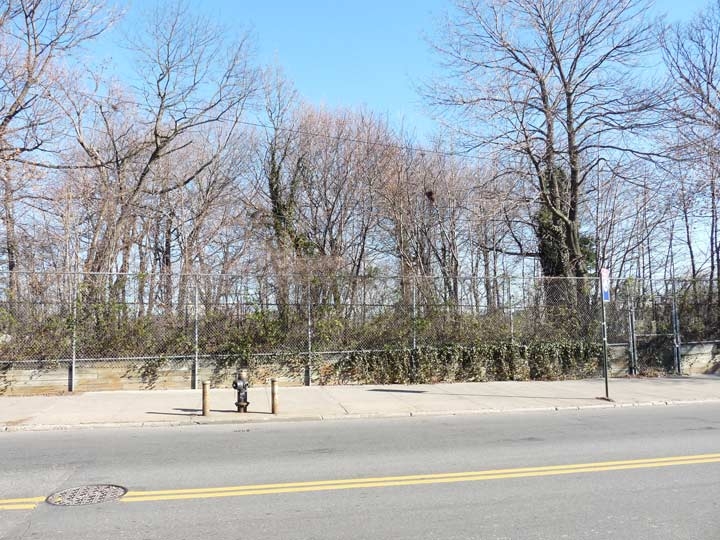 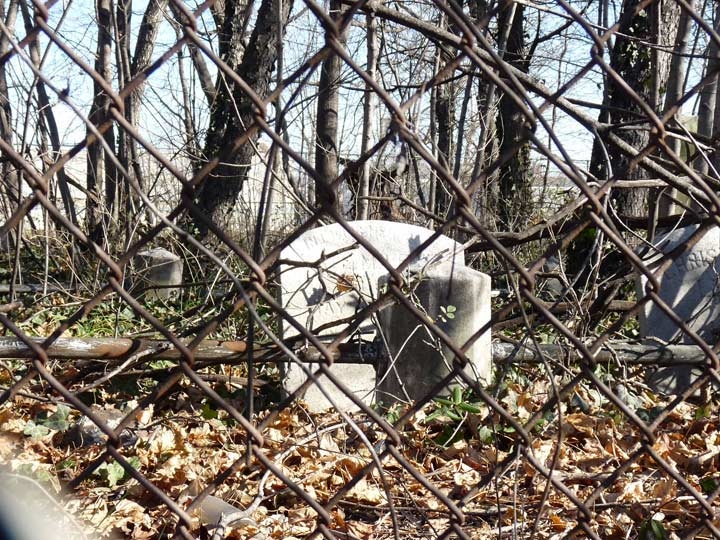 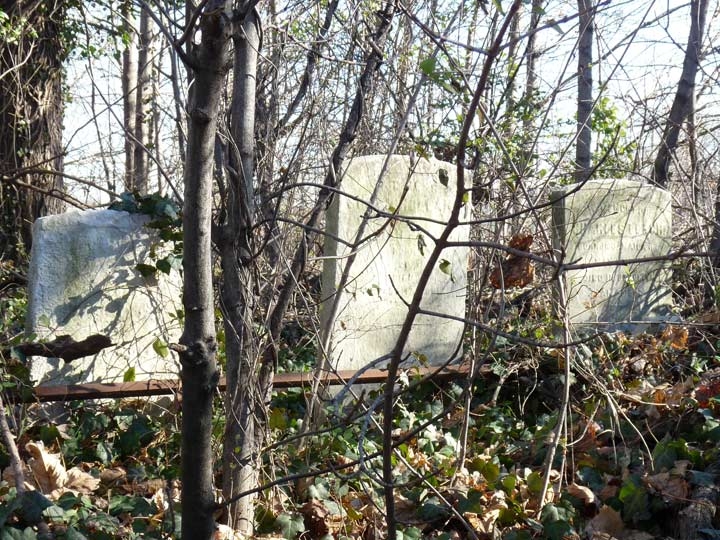 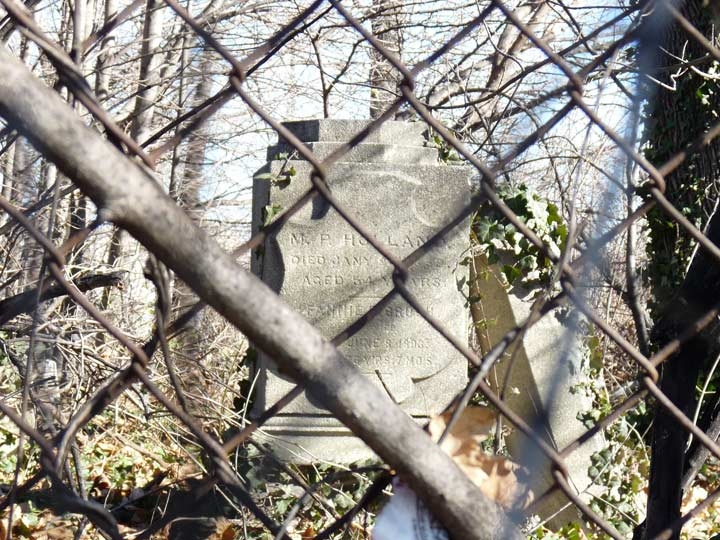 The cemetery has been relatively vandal-free and the monuments are more or less intact. The original Methodist Church was likely initially located near its churchyard. The cemetery was initially owned by the Leech and Snedeker families, who donated it to the church after most family members had moved away. There are between 100 and 110 burials, the earliest in 1816, the last in 1920. 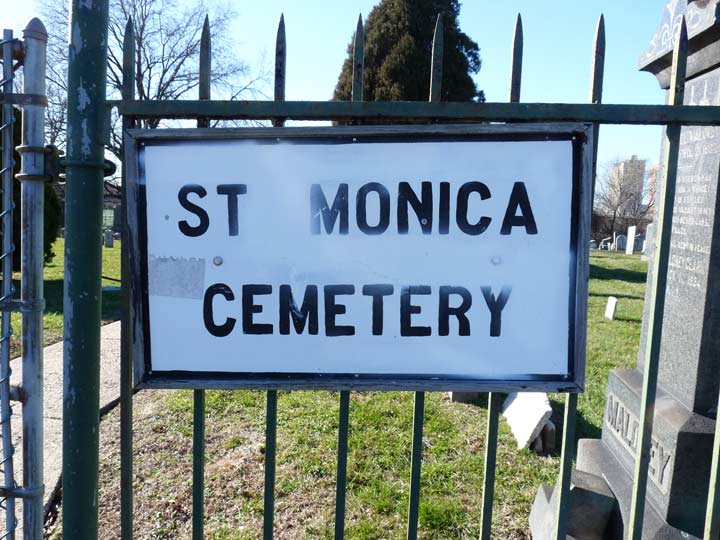 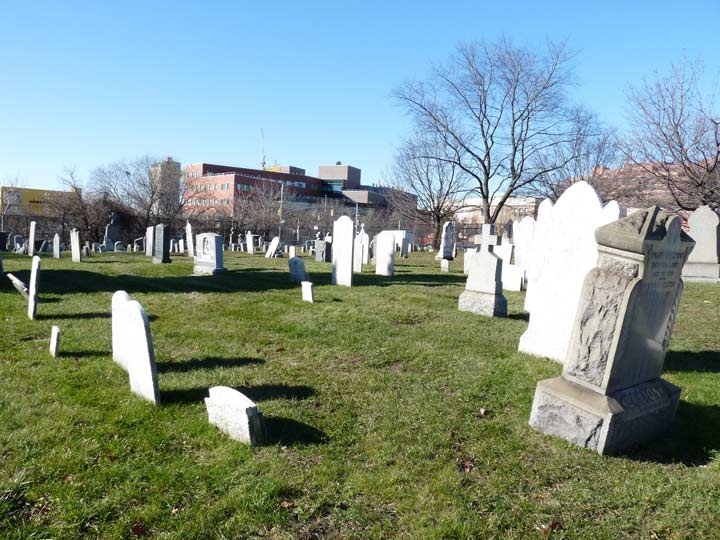 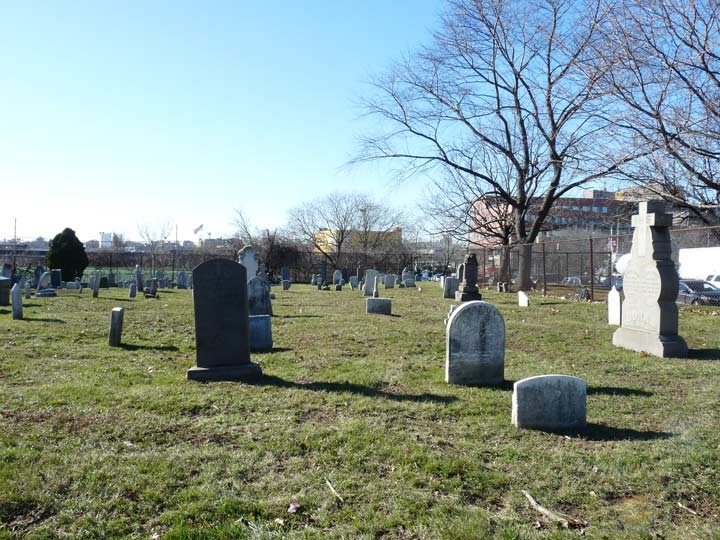 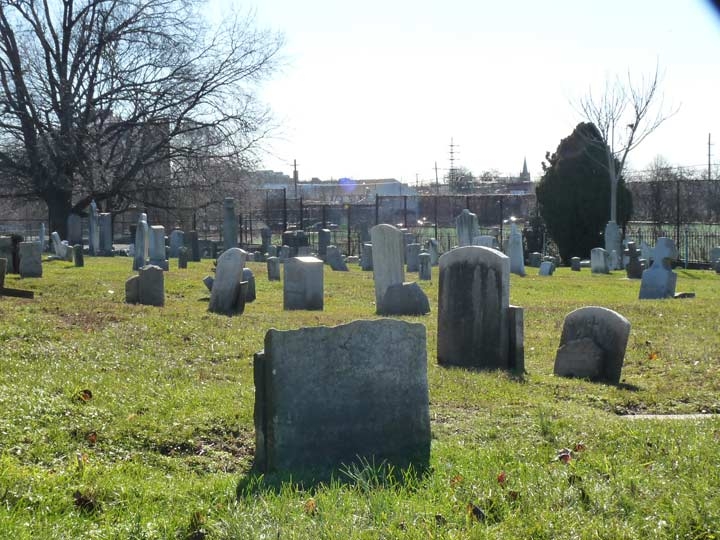 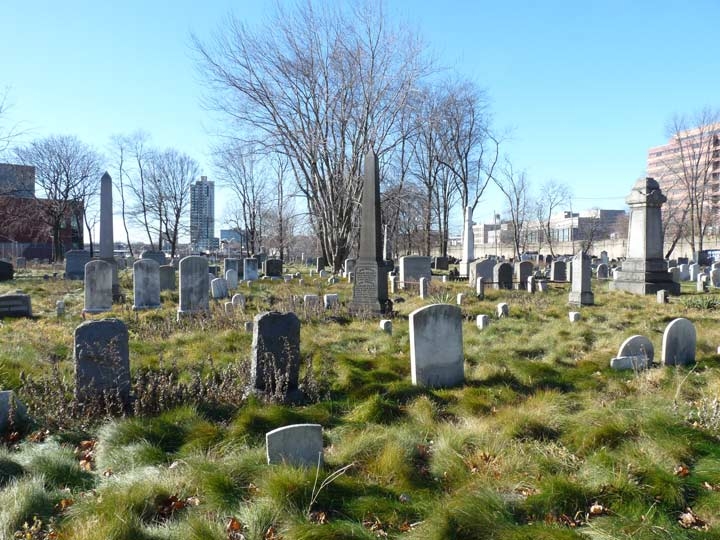 The cemetery associated with St. Monica’s Jamaica parish is still intact at Liberty Avenue and 160th Street, opposite the York College campus. When the late NYS Governor Mario Cuomo resided in nearby Jamaica Estates, St. Monica’s was his parish church. 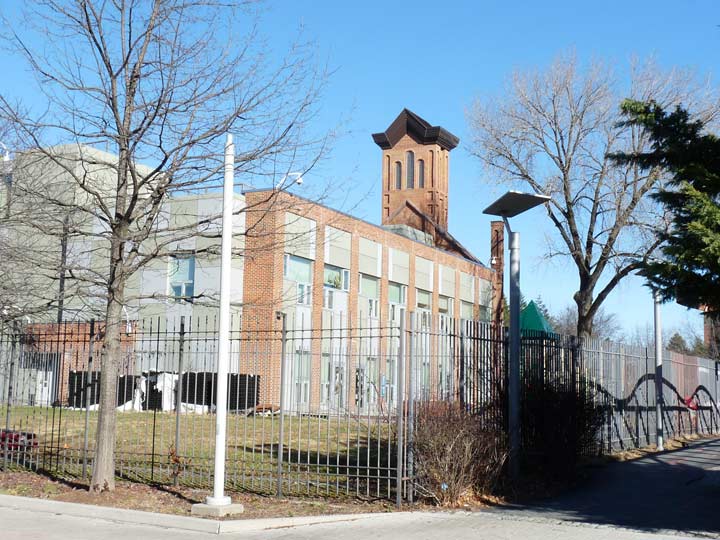 Only the steeple remains of St. Monica’s Roman Catholic Church, on 160th Street south of the LIRR overpass and visible from Prospect Cemetery. It was built by Danish mason Anders Peterson in a Romanesque style between 1854 and 1857; a succession of fires have left part of a wall and the steeple. St. Monica’s parish was deconsecrated in 1973, and the building’s  final collapse came in May 1998, leaving just the steeple. In 2005-2006 York College constructed a child care center here, using the steeple as a façade on the 160th Street side. 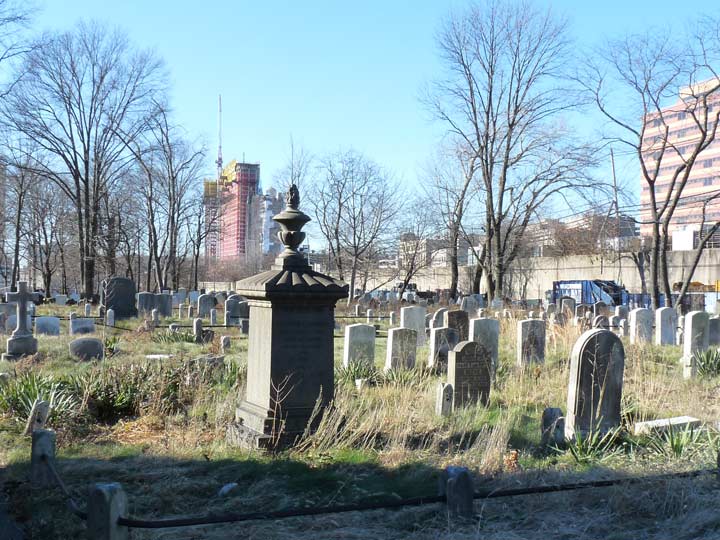 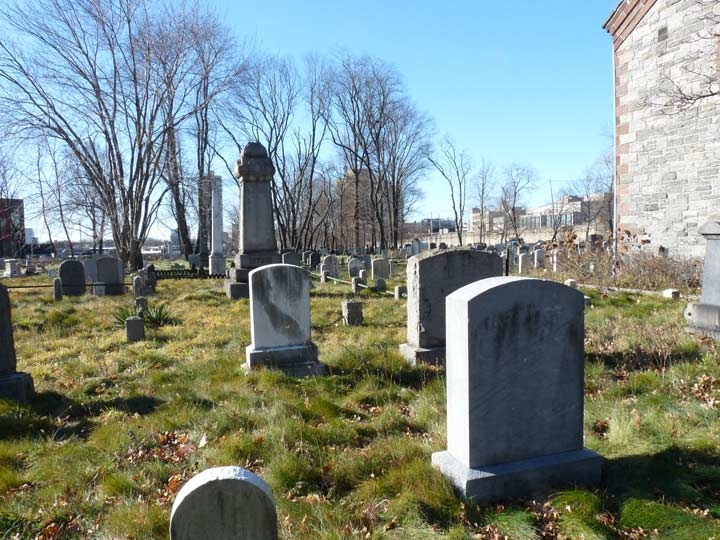 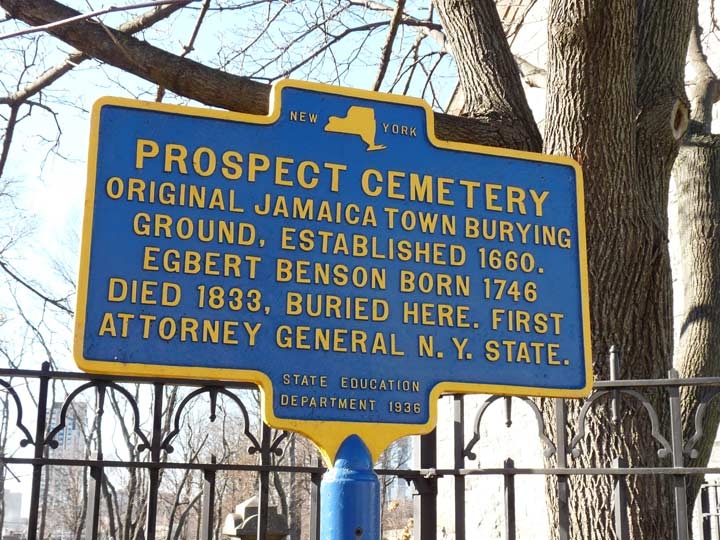 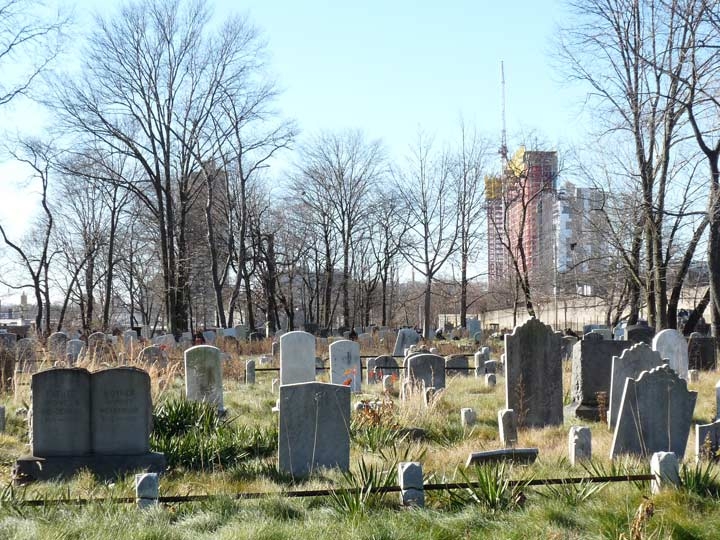 Prospect Cemetery, entered on 159th Street on the York College campus, is no stranger to Forgotten NY fans. I have featured it on a number of tours, and its curator, Cate Ludlam, who has worked tirelessly to rescue the cemetery from weeds, vandalism and ruin for the past 25 years, gives FNY some credit for raising consciousness about it.

This is probably the oldest cemetery in Queens, and perhaps the entire city. Old records show that it dates to the 1660s. The cemetery can boast 53 Revolutionary War veterans, 43 Civil War veterans, three Spanish-American War veterans, and many interments from prominent Long Island families such as the Lefferts. Prospect was designated as a city landmark in 1977. The last interment was in 1988; the oldest graves are in the rear of the cemetery, at the treeline in these photos.

The cemetery’s chapel, known as The Chapel of the Sisters, was built in 1856 and commemorates builder Nicholas Ludlam’s three daughters, who passed away at a young age. The chapel’s interior is dotted with epigrams such as “I will ransom them from the power of the grave” and “Weeping may endure for a night, but joy comes in the morning.” In the 17th and 18th Centuries, prominent citizens were often interred in the very church in which they worshipped. In that era, pews were often sold or rented. Less prominent or poorer people were buried in the churchyard in the 1600s and early 1700s. 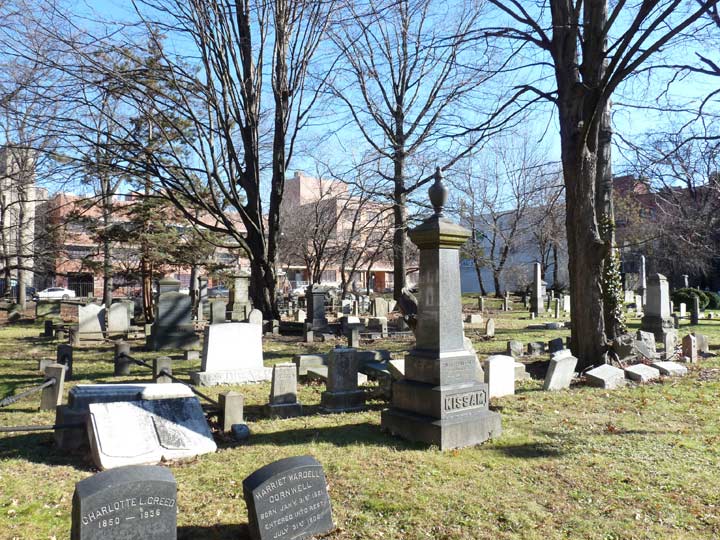 This high-steepled church on Jamaica Avenue off Parsons Boulevard dates to 1862, replacing an earlier edifice dating to 1822 that burned the year before. The parish itself goes back to 1702 and the surrounding churchyard to 1734. Rufus King and his descendants were enthusiastic parishioners. His son, NY State Governor John King, contributed a marble baptismal font to the old church in 1847 and an organ to the new in 1862; later, the family provided an Oxford Bible, 4 prayer books and a bishop’s chair. 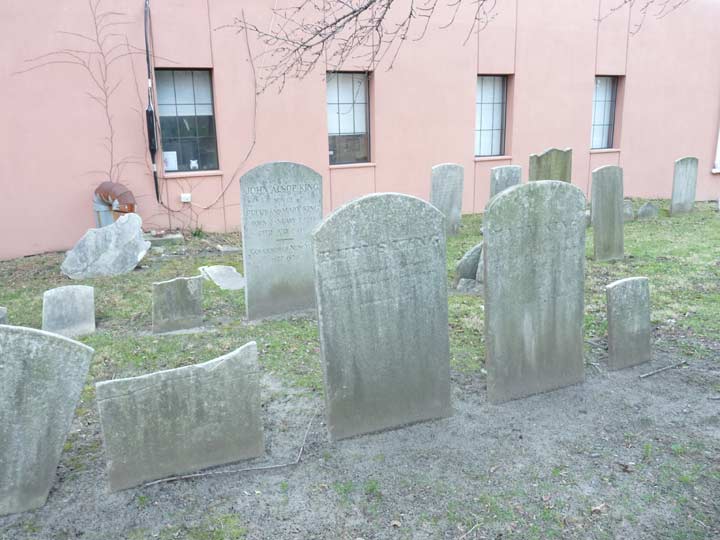 Rufus King, his wife Mary and John Alsop King are buried in the Grace churchyard.

Oddly, an old painted ad for Castro Convertibles faces the churchyard and is invisible from anywhere else. The “first to conquer living space” seems to want to conquer space in the other world, as well. 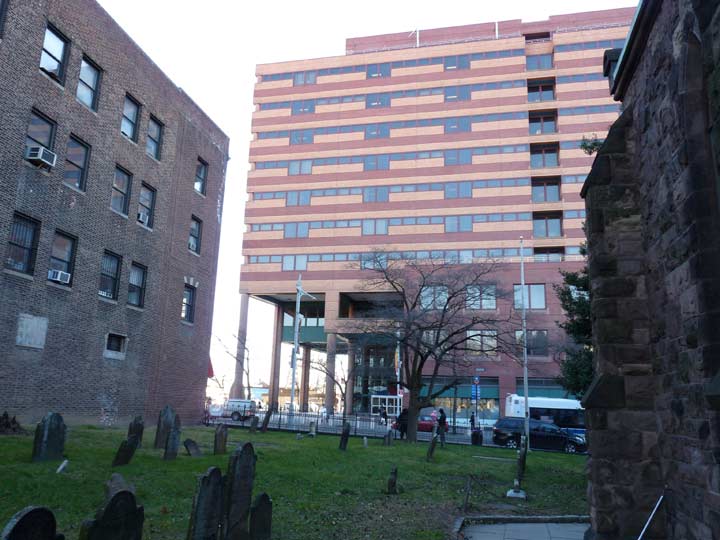 The most interesting section of the cemetery is near the front gate, where there’s a surfeit of 18th-Century burials. 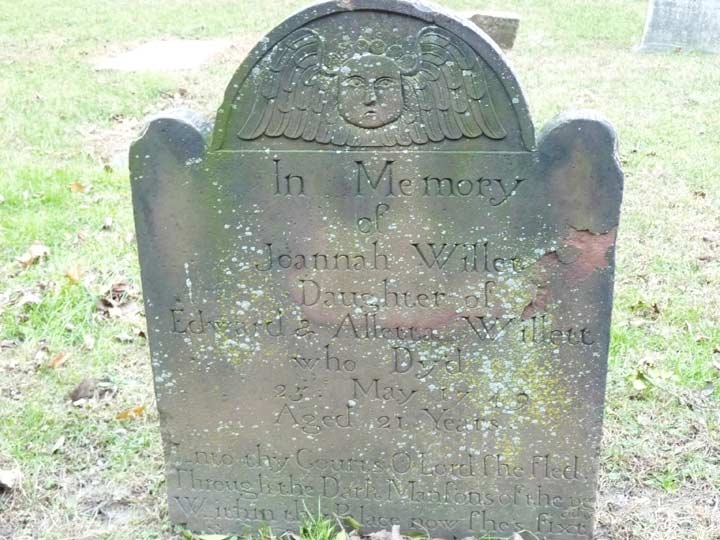 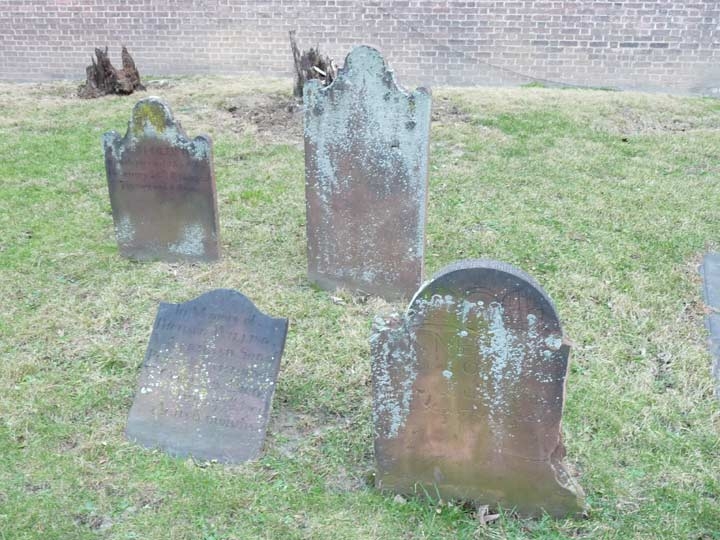 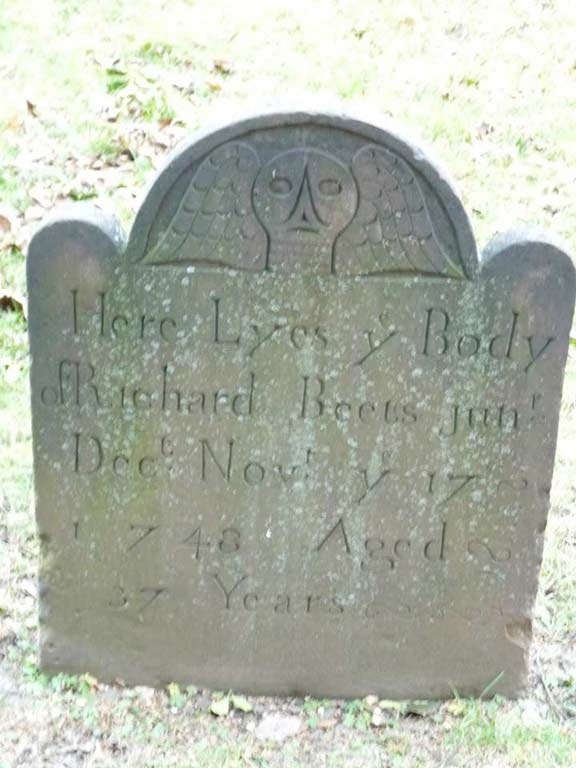 The inscriptions on these brownstone markers, often with intricately carved tops and winged angels, has held up remarkably well — much better than the limestone and marble markers that came into vogue in the 1800s, which have suffered from deterioration. Members of the Betts family are buried here. The family also has its own burial ground further west in Maspeth, which is maintained as part of Mount Zion Cemetery. Interestingly, Newark stonecutter Uzal Ward included his name on the Mary Betts marker. Ward was based in Newark and traveled around the region as he was hired to create tombstones. Though he created hundreds of local markers, he signed only a handful; findagrave lists them here.  There are two of them in the Grace Episcopal churchyard.

Ward was an early brander:

I believe he went to St. Monica’s in his early days, prior to marriage, when his family lived in the South Road area.

Cuomo lived in Holliswood and his parish would have been Immaculate Conception. As a youngster, living with his parents in South Jamaica, it could have been St. Monica’s.

If you take a walk through the burial ground of Grace Episcopal, the name ‘NAPIER’ is represented many times with very large, expensive markers – one particularly ostentatious one just outside the front door of the church.
An online check has records of Napiers as members of Grace as far back as the 1700’s.
The family owned a large tract of land that eventually became part of adjacent Richmond Hill – some utility work uncovered human bones not long ago there (NY Daily News).
Would be interesting to know more about the history of this family.