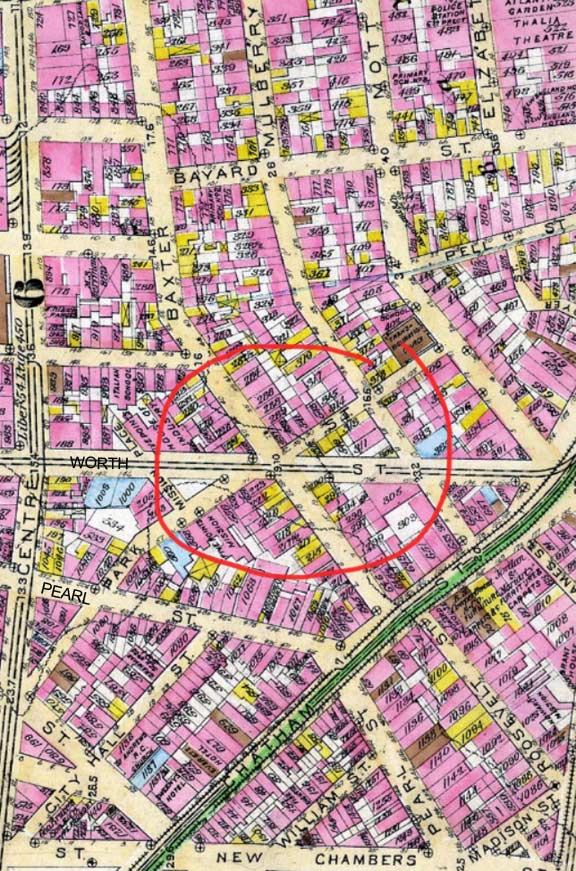 The other day when I posted my Mulberry Street page I touched on Mosco Street, which runs for a block between Mulberry and Mott, a block north of Worth. I have long been fascinated with it as I am with all of Manhattan’s short streets, which are often remnants of something much bigger; for example, in Manhattanville, the two remnants ascribed the title “Old Broadway” are remnants of the old, unstraightened Bloomingdale Road.

Mosco was once Park Street and before that, in the mid-1800s, it was Cross Street; it cleaved through the heart of Five Points, once one of Manhattan’s worst corners; old Hell’s Kitchen or the Bowery has nothing on its street gangs, cold-water tenements, thieves’ dens. See the link, or read Luc Sante’s Low-Life or Tyler Anbinder’s Five Points to get the flavor of it. Much of its was razed to build courthouses and the new NYPD headquarters as well as Columbus Park, and most of it was eradicated by the mid-20th Century. But little Mosco Street is still there as a reminder.

Consulting the 1885 map shown here, Park Street once ran a full 5 blocks, from Centre and Duane northeast to Mott Street, with only the easternmost block still there. A couple of streets are still there, though renamed; Chatham is East Broadway, while City Hall Street exists in a shortened form as Cardinal Hayes Place. New Chambers, the north end of William, and Roosevelt have been replaced by housing projects. NYC is a rapidly evolving entity, and the 2018 map will be unrecognizable by say, 2200, if Manhattan isn’t under water by then. 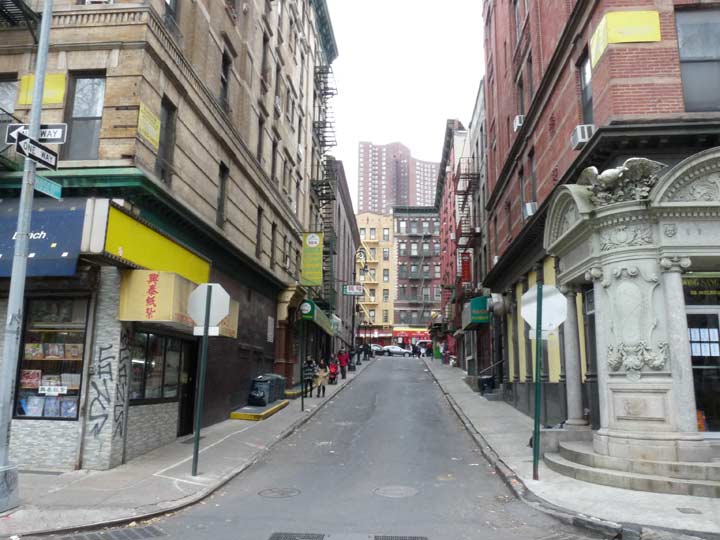 In 1982, the remaining stretch was named for community activist Frank Mosco, who was associated with the Church of the Transfiguration on Mott Street and involved himself with youth outreach, lower-income housing and the elderly, and organized the Two Bridges Little League. 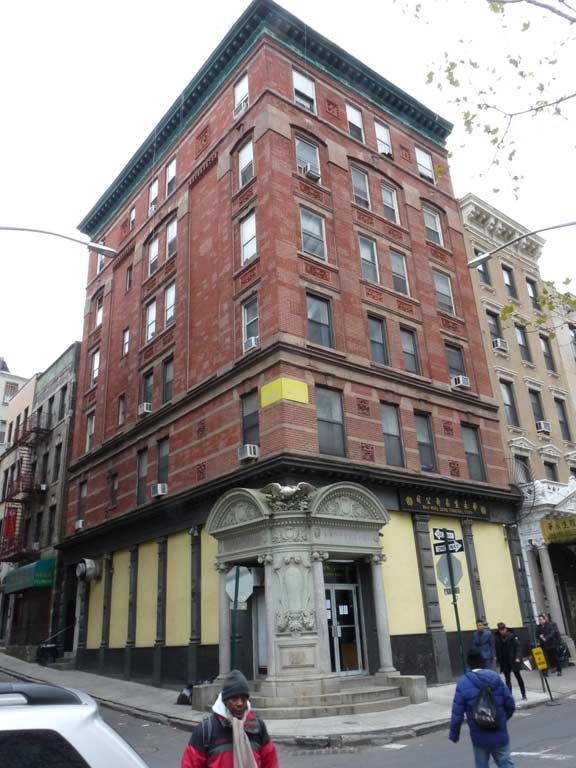 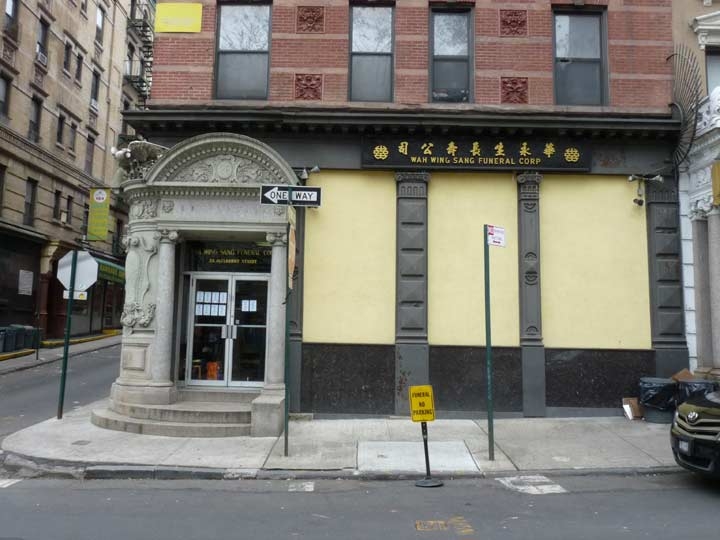 #28 Mulberry, on the southeast corner, is currently the Wah Wing Sang Funeral Home, but the intricately carved eagle on the corner gives it away has having been something grander at one time. It is the former Banca Italiana, which opened in 1888; it gained the eagle in 1911, when Columbus Park opened across the street, as owner Antonio Cuneo considered it an important occasion deserving of the addition. 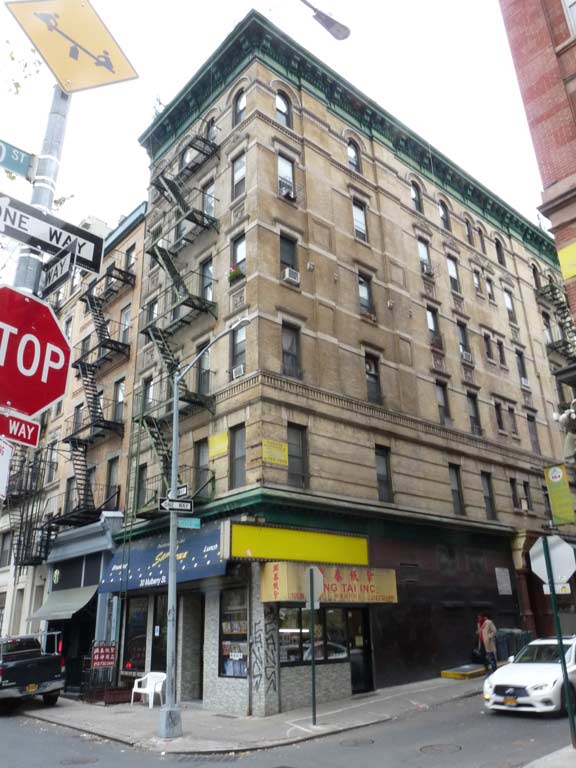 The northeast corner building is #30 Mulberry, where Frank Mosco lived. Mosco was aware that the city was going to name either the street or Columbus Park for him, and chose the street, considering it the humbler choice.

The Department of Transportation has always been inconsistent about street names and subnames. Were Park Street honoring Mosco in 2018, in all likelihood the street would have kept its Park Street signs and a Frank Mosco Street sign would have been added beneath it. Gil Tauber’s Old Streets site has a list of Honorary Streets where the DOT has done it like this.

I just took a walk in Harlem. While 7th and 8th Avenues have been completely renamed for Adam Clayton Powell, Jr. and Frederick Douglass, respectively, the DOT slaps subname signs on 125th Street and Lenox Avenue, where Dr. Martin Luther King, Jr. and Malcolm X have to settle for separate signs under the main signs.

However, a couple of years ago, in south Jamaica, the entire length of South Road was renamed Tuskegee Airmen Way, a group of African-American military pilots who fought in World War II, forming the 332nd Fighter Group and 477th Bombardment Group in the US Army Air Force (the Air Force was a division of the US Army during WWII). In 1981, Stone Avenue in East New York was completely renamed for a prominent neighborhood figure, (Rosetta) Mother Gaston, though the DOT initially missed a couple of signs. 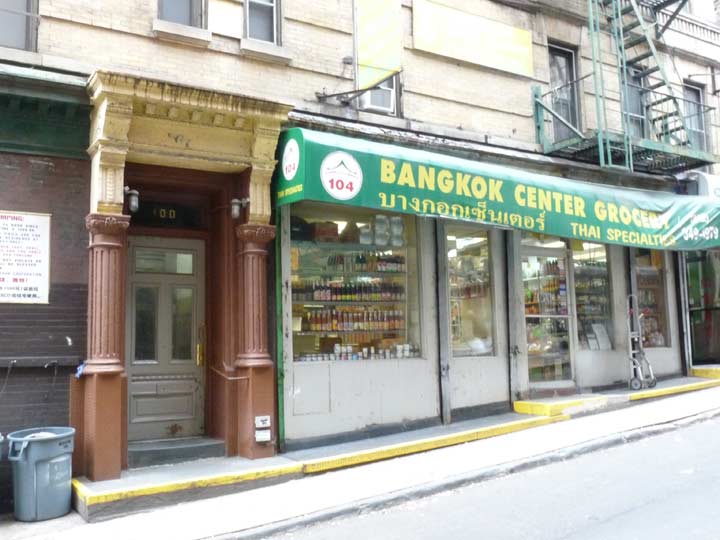 104 Mosco Street is the longtime home of the Bangkok Center Grocery, with an awning sign in the Thai language. 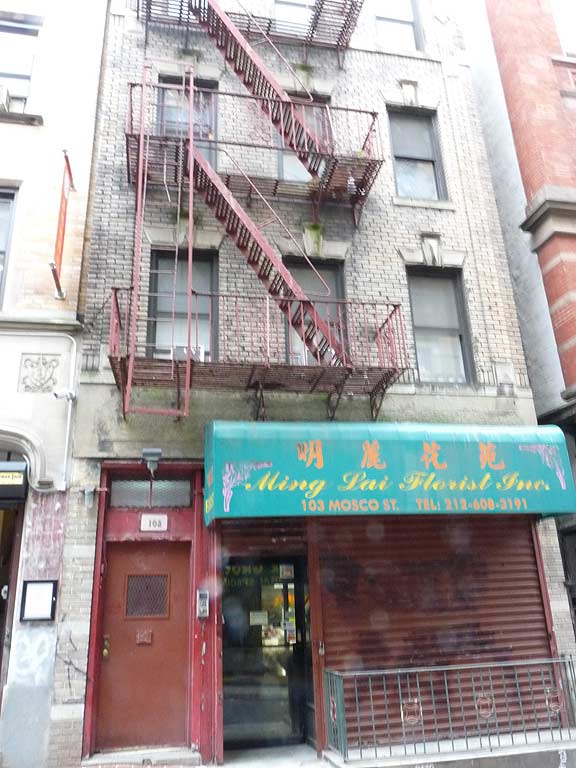 103 Mosco, apartment building with a florist on the ground floor. 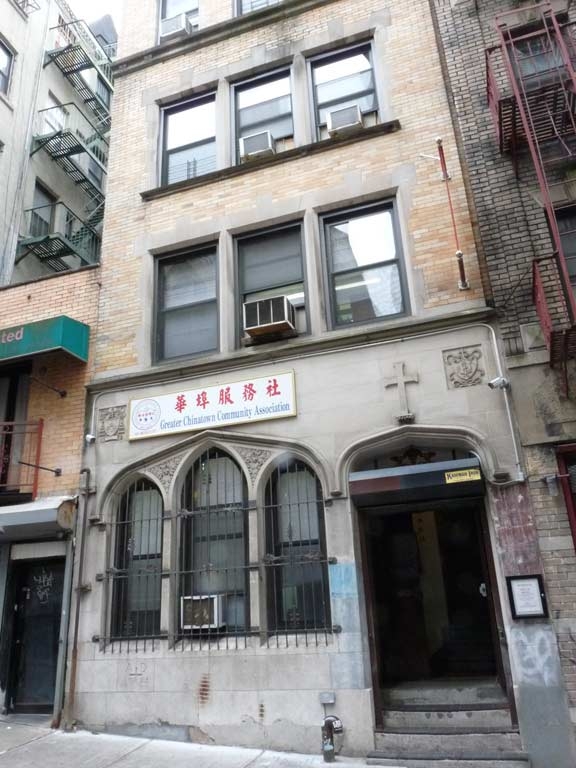 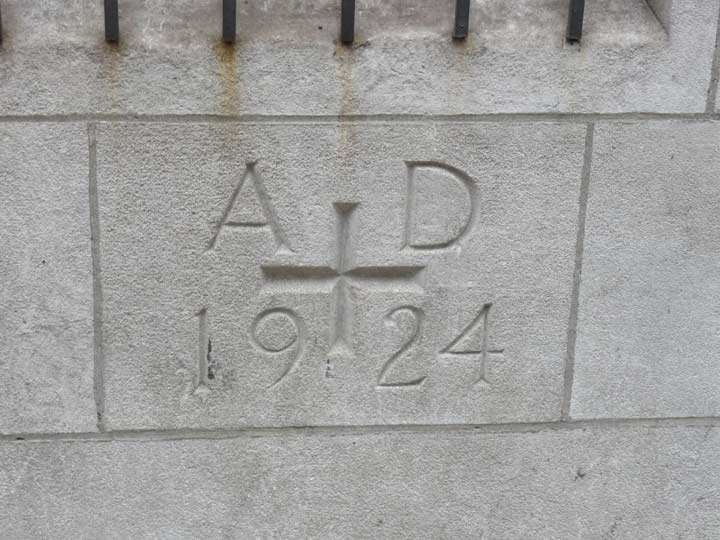 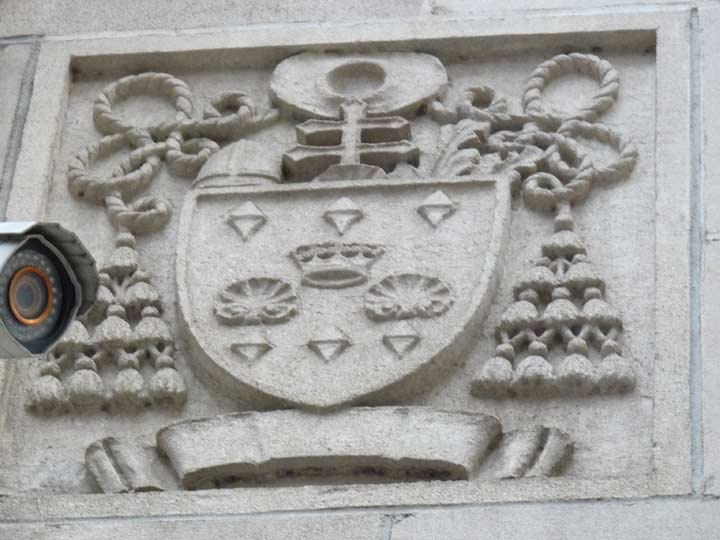 Now the Greater Chinatown Community Association, 105 Mosco is bedecked with Catholic Church iconography. When built in 1924, it must have been an adjunct of the nearby Church of the Transfiguration. 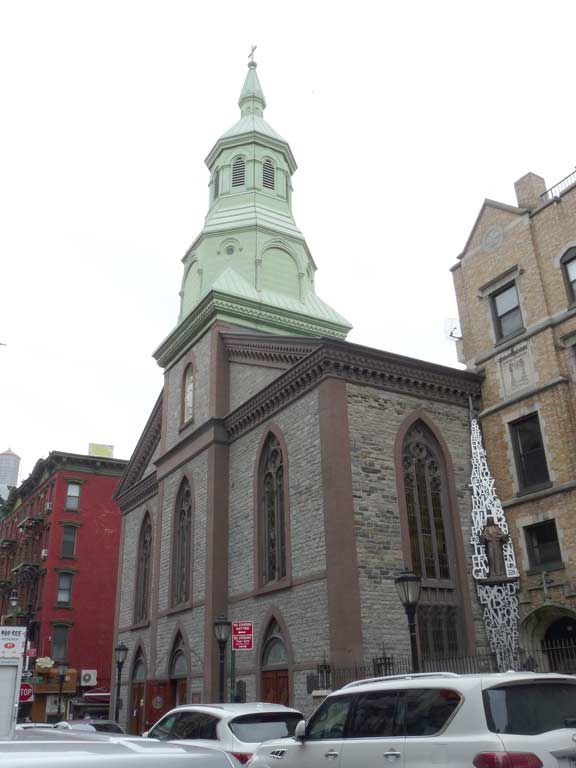 The Church of the Transfiguration, Mott Street at Mosco, is the heart of Catholic Chinatown.

ForgottenFan Dominick Fallucci: From my childhood (early 1960’s) until about the late 1980’s, Park Street ran from Mott Street to the intersection of Baxter and Worth Streets. My mother grew up at 95 Park Street, which was torn down along with the other tenaments on that block about 1961. I believe they were going to build another “urban renewal” project which didn’t pan out. For years until Columbus Park was extended to demap Park Street, that side of the street was a parking lot. 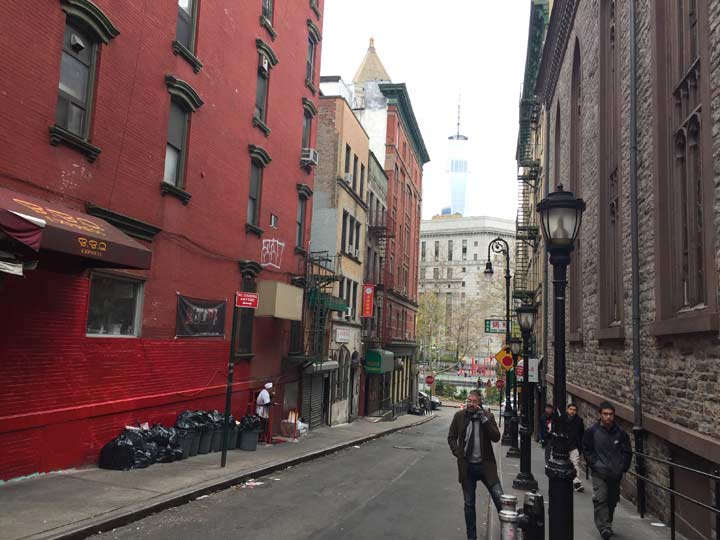 Mosco Street from Mott, looking west toward 60 Centre Street and beyond it, One World Trade Center. This is enough of a downhill to attract sledders in the winter, and the local kids called it Suicide Hill.

Mosco is illuminated by just one Bishop Crook but some NYC Parks-style type B’s surround the church.

Did you go to Wo-Hops when you took these pics?

Just to note on the last picture, only the very top of the Thurgood Marshall U.S. Courthouse is visible, peeking above the cornice of #28 Mulberry. The building directly ahead of the end of Mosco Street is 60 Centre Street, the New York State Supreme Courthouse. Having traversed that stretch countless times in the 1970s (I considered this the “backdoor” entrance to Chinatown), I’d recognize that anywhere.

I was born in 1930 on 37 Mott St., next to Transfiguration Church. I grew up, knowing Park Street. I think in the picture of the church S side, there are still the railing on Park Street, headed down towards Mulberry St. There were some rails missing at the top,and the challenge to us children (ages 7-9?)was to skootch in, and descend the length down (10′-20′?) holding on to the rails, and back up again. It was invigorating! *Thank you for the history of the funeral parlor, on the SE corner. *I remember the florist in the center of the block. My sister-in-law got beautiful flowers for her wedding there. * Past Mulberry and the then S side of Columbus Park, was a tiny shoe repair shop. We would get new heels,maybe a tapdance rarity customer, and if major repair, replace the sole. We would sit by the window, looking out to the park, while shoes worked on. I was so confused, knowing I was there, and today, it is gone. *On a family trip back to Chinatown, I was struck, ‘Where is Park St.?? Memories,memories……

I never knew if this street pronounced the same way you were saying the capital city of Russia, which is Moscow, or is pronounced differently?

Take a closer look at the “Eagle” on Wah WIng Sang funeral home. It looks more like a Flying Rat than an Eagle!

My Grandfather owned the flower shop ” New Chinatown Florists and Gifts” at 102-104 Park Street in the 1960s before it became the Bangkok Grocery. I think that the floral arrangements they made for the funeral parlors around the corner were the bulk of their business. My mother’s cousins currently own the flower shop around the corner on Mulberry.

My mom lives nearby on Madison, I cut through Mott almost every day, on my way to Canal. I love this little street and tell everyone ( tourist mostly) about it. It amazes people, I also tell them of your website, forgotten ny. They are happy to know about both. Thank you for a great site.

I lived at 103 Mosco for 5 years (2008-2013) on the third floor. Interesting history. City records say the building was built in 1899(?) which means the 19th century, unknown date. Before I moved in I was told by the 2nd floor tenant there was 10-12 sweatshop workers living there and before she moved into her apartment, there was a double homicide. I loved the apartment. Great location, but noisy 24/7.

I WAS CONFIRMED AND GOT FIRST CATHOLIC COMMUNION ON 1941 AT TRANSFIGURATION CHURCH.I LIVE AF 172 WORTH STREET AND GREW UP IN COLUMBUS PARK AND PS 23 TILL 1951

I always wondered what happened to the egg cake lady…