Central Park’s Pilgrim Hill can be found just inside the park entrance at 5th Avenue and 72nd Street and takes its name from the stylized representation of one of the Pilgrims, British immigrants to the New World led by William Bradford who set out from Plymouth, England in the cargo ship Mayflower in September 1620. The Pilgrims were Separatists, or worshippers who had chosen to break with the Church of England which itself had broken from the Roman Catholic Church about a century before. Their interaction with Native Americans has been mythologized and embellished, but there’s no denying that they were lucky to encounter Squanto, who knew English because he himself had already been to England and back.

The Pilgrim was sculpted by prolific bronze artist John Quincy Adams Ward and dedicated in 1884 as a gift to New York City by the New England Society. The pedestal was designed by Richard Morris Hunt, who has a plaza dedicated to him on 5th Avenue and 71st Street a short distance away. 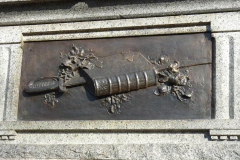 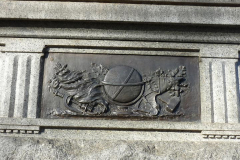 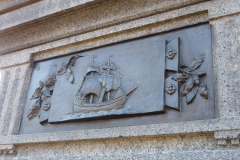 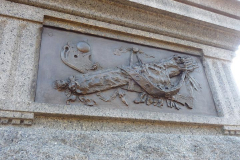 The pedestal has four curious bas reliefs. I recognized the Mayflower but the other three are somewhat cryptic. The Barnes & Noble guide to Central Park (my Bible in Central Park matters) says they depict “Bible and sword,” “Crossbow and arrows” and “commerce.”

The forge is identified on the bottom of the bronze.

Henry-Bonnard specialized in sand cast bronzes and was selected by Remington to make his all his first bronzes produced from 1895-1900. The original Henry-Bonnard foundry name is one of the clues used to help authenticate an original sand cast Remington bronze. [Real or Repro]

Pilgrim Hill overlooks Central Park’s Conservatory Water, famed for its model boat enthusiasts. The name comes from a conservatory, or greenhouse, that was supposed to be built next to it, but plans for it fell through.