Across the city there are neighborhoods that are “parks” in name only, with only a handful of playgrounds providing much-needed public open space. Rego Park, Borough Park, and Morris Park come to mind. Their names were bestowed by developers without consulting the city’s Parks Department. The neighborhood of Jackson Heights also seems like a misnomer. Unlike Washington Heights, Morningside Heights, University Heights, or Morris Heights, this Queens neighborhood does not have steep topography or dramatic overlooks. Although it is filled with multi-family apartments, Jackson Heights does not have any sizable parks for its residents.

The largest public green parcel in this neighborhood is Travers Park, a playground on 34th Avenue between 77th and 78th Streets. In 2013, this park was expanded by closing a block of 78th Street to traffic and transferring ownership of the private schoolyard across this street to the park.

The pedestrianized street was given a wave-like line for park goers to follow and a circular plaza that could be used for public gatherings. On the site of the paved field the expansion/makeover provided a grassy mound runged by benches and trees. The former schoolyard carries the name Rory Staunton Field, in memory of a beloved student at the Garden School.

This transformation of Travers reminds this historian of a much larger green space that the neighborhood lost. Across the street from Travers Park used to be the 12-hole Jackson Heights Golf Course, built by the Queensboro Corporation in the 1910s to attract an affluent clientele to its newly-built neighborhood.

The golf course was developed in the 1930s, but there’s one hint of its phantom presence. The Fairway Apartments on 34th Avenue, named for the golf course that it once faced. The building features turret towers and an arched brick doorway that give the building a centuries-old appearance.

There was also another private green space a block to the east of Travers Park. The Jackson Heights Tennis Club featured clay courts that hosted tournaments. The club closed in 1951, and the block was subsequently developed for I.S. 145. The image of the tennis club is from the collection of the Queens Historical Society.

Although a map of Jackson Heights shows only small playgrounds, there is another park here that stretches for 2.2 miles with 45 traffic medians under the care of NYC Parks. In its plan for 34th Avenue, the Queensboro Corporation envisioned it as the borough’s version of Manhattan’s Park Avenue. As was the case with Park Avenue, increased usage of automobiles resulted in the narrowing of the medians on 34th Avenue, making it perhaps the narrowest linear park in Queens. 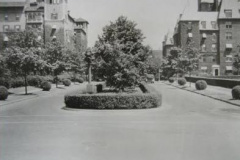 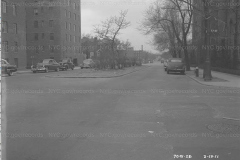 Historical images from 1928 and 1951 show the generously wide median on 34th Avenue. I am not sure when it was narrowed. Most of the medians appears the same, but the one between 87th and 88th Streets carries the name Patrick C. Deignan Mall, a beloved civic and political figure in Jackson Heights. Politicians love to rename things on the map, and I shouldn’t be giving theme ideas, but there are 44 more malls on this avenue that could be renamed for civic leaders and neighborhood celebrities, making it a veritable Jackson Heights Hall of Fame.

The class divide on this road is evident as medians in Jackson Heights have more shrubs and trees than those in Corona which are simply concrete punctured by trees. At 100-05 34th Avenue is the Shaw AME Zion Church, an African-American congregation.

But prayers referring to Zion here predate the church as this facility initially hosted the Northside Hebrew Congregation, which operated here through 1957. Its architectural style has been described as reminiscent of the Lower East Side, the first point of arrival in New York for Jewish immigrants in the early 20th century.

At the corner of 104th Street and 34th Avenue is an apartment building whose back wall skews to the grid. Its property line predates the subdivision of this neighborhood.

Returning to Jackson Heights, there is another historical curiosity a block to the south of 34th Avenue. The nondescript four-storey residence at 34-20 75th Street stands askew to the grid-imposed property lines of its neighbors. Prior to the 1920s this block was open farmland and the pre-grid property lines ran along the ancient Trains Meadow Road. With the development of Jackson Heights, this old road was consumed by the grid, but a couple of holdout properties maintained the frontage of Trains Meadow Road. The only other property that gives away this phantom street is the grid-defying house on the corner of 81st Street and 30th Avenue, which Kevin documented on his 2006 walk through Jackson Heights.

Travers Park offers today’s residents of Jackson Heights much-needed green space, but if one knows where to look, there are hints of a much greener past around here, given away in the names of apartment buildings, and unusual property lines.

Travers Park is located between 77th St and through 78th St and the new Rory Staunton Field which runs through to 79th St.

The street that is closed to traffic is 78th St, not 79th St. Rory Staunton Field is the land purchased from the Garden school which runs from 78 to 79 St.

When Calvin Coolidge was president in 1924 his teenaged son Calvin Jr. developed a blister on his toe while playing tennis. Within a few days it became infected and Calvin Jr. died. It’s easy to dismiss that as a relic of the days before modern medicine, but apparently not.

Go to the Hillcrest Apartment house it stands at the crest of the hill that gave JHTS its Name. Author is wrong! It is a tremendous view west with spectacular sun sets!!!

The “grid-defying house” that used to front Trains Meadows Road is actually on 31st Ave, is yellow and (some would say) technically in East Elmhurst.