Reading various online accounts, I’m aware that a lot of people have had a particularly bad year in 2020, from Covid and its consequences that I don’t have to enumerate here. For me, fortunately or unfortunately (as you would care to interpret it) it’s been mostly business as usual with dozens of resumes sent out fruitlessly, which has been mostly the case since 2011. I have gotten most of my work assignments from agencies with 2013, 2016 and 2019 providing lengthy assignments. I have kept things together with scotch tape and bubble gum for the last decade, with website advertising, freelance and tour earnings.

I tend to take pleasure from mundanities. I like where I live. For the first time out of anywhere I have lived, I can walk down to a body of water, at Virginia Point at the north end of Little Neck Parkway, though I have to brush away lots of weeds and branches to get there. Though the Scobee Diner, which served as Forgotten New York’s home away from home, closed in 2010, there is no shortage of nearby diners arrayed on Northern Boulevard like the North Shore, Bayside and Seven Seas, as well as the Parkway, on Douglaston Parkway. And, I can walk to a genuinely historic site. 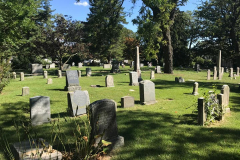 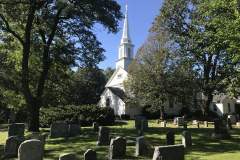 On April 15, 1829, the leading men of the community drew up a document that announced their intention to build a church and later a school for the farming community.

Land was donated by Wynant Van Zandt, for this purpose, and the church began construction in 1830 on what was the highest land on the Van Zandt farm. Pastor Henry Beare arrived at Zion in 1842 and served the church for fifty years. It was his idea to name the area Douglaston for George Douglas, a regular in the Zion pews who purchased the property from Van Zandt. The original church burned down but the present church, built in the 1920s, is a near exact copy, at Northern Boulevard just east of Douglaston Parkway, and its churchyard contains gravesites going back to the origin of the church. It’s quite a coup for me to have a quiet country churchyard to visit whether it be on gray, snow-coated winter days or sunny days in September, like this one.

Facing the cemetery at 244th and Church Streets is Engine 313/Hook & Ladder 164, which answers to fire and rescue necessities in Douglaston, Bayside and Little Neck. It was constructed in 1929, and most firehouses built from 1925-1935 look like this as a design template was used. The plaque has Mayor Jimmy Walker’s name. 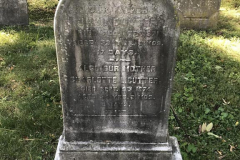 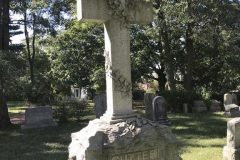 Little Neck’s early days featured a colorful character, the “Bard of Little Neck,” or “The Long Island Farmer Poet” Bloodgood Haviland Cutter (1817-1906), potato farmer, poet and acquaintance of Mark Twain, who immortalized him as the “Poet Lariat” in Innocents Abroad, a travelogue concerning his trip to the Holy Lands in the Middle East. Twain poked fun at Cutter as a master of doggerel who annoyed fellow passengers in the book. Cutter self-printed many editions of his verse, which are little-read today. He owned numerous parcels of land in Little Neck, Great Neck, Manhasset and Plandome that he purchased or inherited. Cutter Mill Road in Great Neck, on the site of a mill he purchased from the Allen family (into which he married), is named for him, as well as a short half-block called Cutter Avenue.

When Cutter died in 1906 he left $750K of his fortune, much of it inherited, to the Long Island Bible Society and the rest of his fortune was divided among 232 heirs. There are other Cutters buried in the plot, including his wife Emeline Allen Cutter.

One of the many tombstones belonging to a Cornell family member. Five generations of the Cornell family made their homes in Little Neck. They were descended from Quaker Richard Cornell, who had come to Flushing from Rhode Island in 1643 and had received a land grant from the Dutch West India Company.

Samuel Cornell, born 1702, raised produce for Manhattan markets sending it by barge from the north end of the Old House Landing Road, now Little Neck Parkway. A descendant of Samuel Cornell was Ezra Cornell, the founder of Cornell University.

A short lane off Northern Boulevard east of Marathon Parkway is named for the family. 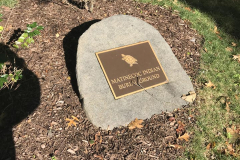 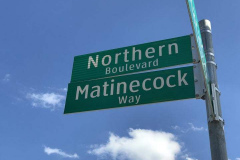 By 1636 Europeans had driven the Matinecoc Indians, the area’s original settlers, out of the area along the North Shore east of Little Neck Bay called Madnan’s Neck after an Indian word meaning “place of fish.” Madnan’s Neck was subdivided into Little and Great Neck, after their relative sizes. Little Neck developed as a fishing village after the famed “Little Neck” clams were discovered in Little Neck Bay in the 1830s. But the bay was overfished and polluted after a few decades, though Little Neck Bay still has a lively recreational boating scene.

The Matinecoc Indians, a branch of the Algonquin group, had occupied the lands of eastern Queens for centuries before Europeans arrived. While the Matinecoc tribes gradually sold off their holdings to the Dutch and British in other parts of Long Island, giving the lands a peaceful transfer, Thomas Hicks (of the Hicks family that settled Hicksville) forcibly evicted the Matinecocs  in Little Neck.

Much later, when the Flushing and Hempstead Turnpike, also known as Broadway and presently, Northern Boulevard was being graded and widened, the graves of the Matinecocs were discovered. They were reinterred in the Zion Episcopal Church cemetery in 1931. A stone marker, designed in two pieces on either side of a tree, is marked “Here Rest the Last of the Matinecoc.”

In 2015 the corner of Northern Boulevard and Marathon Parkway was named “Matinecock Way.” Some Native American families still live in Little Neck, but some members claim they are not Matinecoc, as the article indicates.

Generations of the Rea family, which originated in Ireland, have lived in Little Neck and Douglaston. The Bryce Rea real estate business remained on Northern Boulevard and Marathon Parkway until 2018.

I grew up in Little Neck in the 50’s and Zion Church was not only a landmark, but a community center. It’s strawberry festival in June was wonderful. At the time there was little awareness of native people. I’m glad this history is being added to our understanding of this place.

The Incorporation of Zion Episcopal Church is recorded in Queens County Liber of Deeds AA, Page 56. This document was recorded with the Queens County Clerk June 17, 1830, and can be accessed on Microfilm at the Department of Finance, across the street from the Jamaica AirTrain terminal.

The sale of the actual land by Wynant Van Zandt to Zion Episcopal Church is recorded in Queens County Liber of Deeds BB, Page 305 and was recorded (or sold) May 2, 1831. Wynant Van Zandt is described as a NYC Merchant in the deed wherein he bought Little Neck (THE 170-acre Neck) from Thomas and Abagail Wickes February 27 1813 (Queens Co. Liber of Deeds N, Page 18). The 1813 Sale excluded Public Easements to the Landing. The Gate was Near Cornelius Van Wyck’s houses. The Deed included nearby wood lots and nearby Salt Meadow. On the North the Neck was bounded by a point; on the East by “Great Neck Bay” and Richard Allen, on the West by Cornelius Van Wyck and Little Neck Bay. The deed is silent on the southern bound of the 170-acre purchase. On 10/19/1822 Wynant Van Zandt bought a farm called Little Neck Farm from Jeffrey and Mary Hicks.